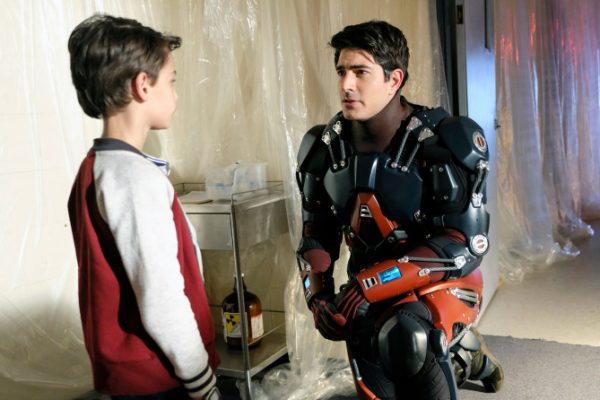 The Legend of Tomorrow crew travels back to Halloween and the childhood of a team member on a mission that brings out the child in them all.

The episode begins with a young boy being chased through a factory by men in suits. We know this is Ray, but the rest of the events are new. He seems to be protecting a creature that the suits want. They corner the boy and demand it. Then, one fires a gun and in an action we don’t see, but is obvious to everyone, kills the boy.

In the future, on the Waverider, adult Ray and the rest of the team are discussing the need for an “ice breaker” activity. Zari tries to end the talk by doing a mini-take down of every member except Sarah. I love her analysis of Amaya and Nate as “these two have some kind of will-they or won’t-they going on,” which is spot on like the rest. The team fights, but Ray settles everyone down and entices Rory into doing an icebreaker — a trust fall. However, just as Rory begins this fall, Ray disappears as history catches up and claims him. Rory hits the floor. I think we all knew that was going to happen.

The team figures out that Ray died in 1988 on Halloween, so they set off to save the boy. Ray actually returns during the ride back to the past, which is fortunate. The team needs all the help they can get to save this Kid!Ray.

The scene that stands out most is the one in where Jax and Zari are dressing for the past. Zari has a lot to learn about the past, starting with the clothing they wore. She complains, but the camera pans to Jax in a treat for the audience. He is channeling LL Cool J in his red tracksuit and Adidas sneakers. As he finishes his talk to Zari, I swear I see him bit his lip like old school LL! Get it, Jax!

He’s not the only one feeling sexy in the 80s. Later, Nate does some serious hitting on Ray’s mom! Little does he know that the mom has been kidnapped and replaced by the old foe of the Legends — the shapeshifting, super strong Dominators.

Ok, let’s roll back a second. The mama Dominator is there because it seems that little Ray has picked up a baby Dominator and made it his friend. Ray is a super nerdy kid and in the 80s that meant he was pretty lonely. Nerds were not hot then as they are now. The Dominator baby watches television, eats, and plays with the boy, filling a hole in his life. 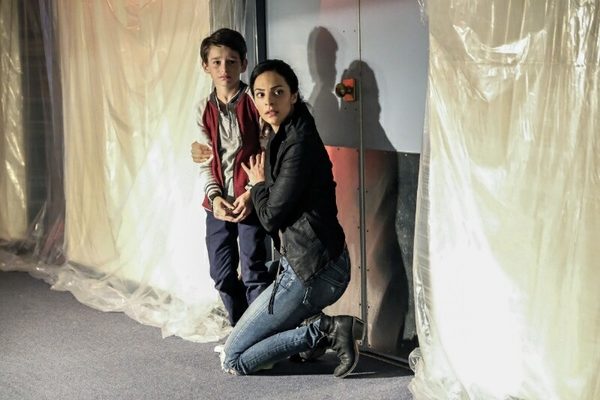 That bond makes it hard for the team, especially Zari who ends up getting close to the boy, to convince little Ray to give up the baby Dominator. He hides away and they lose time. Meanwhile, Sarah greets what she thought was a Time Bureau ship, but ends up being the Dominator mama. Sarah is matched and quickly dispatched to a web as the mama tears up the city for her baby.

While this is all going on on the ground, Jax, Rory, and the Professor are on the ship disagreeing over the discovery that someone has used a jump ship. Jax then figures out that the Professor was that person, but is mistaken about the true nature of the man’s deeds. The Professor is about to be a grandpa. His use of the jump ship was to get a communicator to his daughter, who calls him to announce the impending arrival of her child. The three men take Waverider to that point in time, leaving Sarah to get herself out of the web and the rest of the team to fight the Dominators.

The Dominator Mama and the large team of black suits are all after the baby. The suits capture the baby and little Ray, but the boy and alien escape with the help of some Baby Dominator mind control and a dance from Singin’ in the Rain.

Back to Nate and Ray’s mom’s body on the mama Dominator. They are going at it when the girls bust in and Nate sees who he is really kissing. He gets free. The team soon reunites the family, who leave the planet.

Along this journey, we find that Zari and Ray may have more than just a childhood charm in common. Before they leave 1988, the Legends dress in superhero garb and take little Ray trick or treating much to the fear of his non-nerd bully foes.

This Legends of Tomorrow episode seemed to be the one to reassure the white fanboys that the WOCs aren’t taking over too much. That the CW will keep coming with the stories that center white maleness, despite the popularity of the characters of color. Thankfully, Zari fouls that up by getting closer to boy Ray than anyone else and possibly starting a romance with the big armored guy, so hopefully, the writers won’t leave their women of color to the side again. Let’s hope they bring the focus back to Vixen and the totems next week on Legends of Tomorrow 3×05.