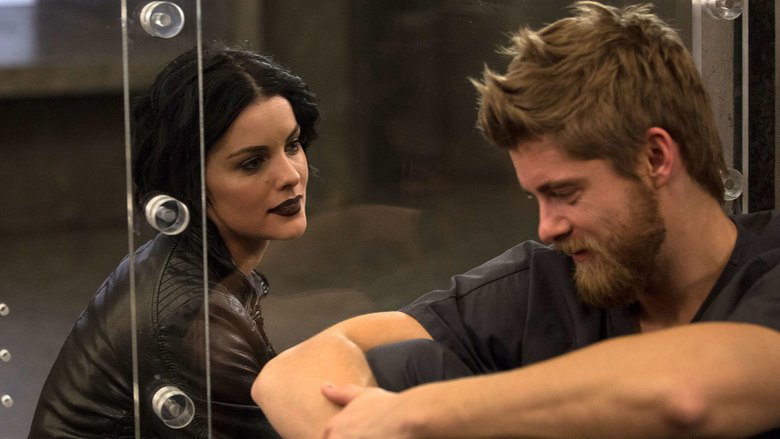 So the moment has arrived and we find out who was at the other side of the bullet between the gunfight of Borden and Patterson. Surprisingly Patterson is the one who gets shot, she tells Borden to get away from her as he just stands there apologizing. I don’t buy his innocent act any longer, I can’t wait for the moment when the team (preferably Weller) to deal with him.

Jane somehow manages to get apprehended and brought to FBI headquarters at the same moment that Weller is low-key missing Jane in front of his sort-of girlfriend Nas. Jane fills the team in on everything she learned about Shepherd, Roman and most importantly who the mole is on the team. As expected, Weller goes into Hulk mode and the race to find Patterson is on.

Just when things seem to be going bad or the team we see that Patterson is still alive — yay! She was patched up by Borden and to thank him she got up from the table to go strangle him with her IV cord. But instead of us getting treated to how badass Patterson could be, she gets a gun put to her head by a very undead Shepherd. Borden convinces Shepherd not to kill Patterson because she would be more of an asset if alive. I think Borden feels bad, isn’t about that life and is trying to fix things. Maybe?

Roman probably had the best line this episode. The team locates his cell phone and Jane tries to get him to stay put, but once he sees a diner who advertises that they have the best eggs in town he tells Jane, “I have to go I’m hungry!” He orders one of my favorites: steak and eggs, and patiently waits for Jane. It’s going well until a team is sent to take him to Shepherd. Roman then takes out the team with the assistance of Jane and Weller who magically appear once Roman finished his food. He goes with them to the FBI and then it’s deja vu to the beginning of the series when Jane was interrogated, confused, and afraid and had no memories, but now the same is happening to Roman. Now I wonder if Jane really saved Roman or did she destroy him?

The new FBI director (that no one likes) decided to fire Nas since she failed on taking down sandstorm. Meanwhile, Patterson shows she’s not a snitch, she was getting holed drilled into her eardrums and didn’t give up any info. I’m really liking her character development. Speaking of character development, Borden magically developed hand-to-hand combat skills, when the team came to rescue Patterson he somehow managed to fight with Weller and handcuff him. I’m confused. Borden either had us all fooled, or his skillset was a lapse in the story.

The ending of the episode this week was weak. As per usual, Weller tells the FBI Director off. Tasha and Reade were seemingly about to get it on, but Tasha shut that down. Borden goes back to Shepherd. Roman is still laying on the floor. At least Patterson went from not hearing to hearing and still managed to get work done, makes me feel like an underachiever.

It’s like being back in season 1 again, except that Jane is a boy named Roman. He’s locked away by the FBI being tortured by memories he cannot understand; except this time, there is someone who can understand what he’s going through. I really wish Roman the best and wonder what happens when he discovers his sister lied to him.

Nas — or should I call her miss “I Have a Source” — is outside a religious building waiting for possible intel from a possibly dead source. While she’s waiting, Weller appears out of nowhere, allegedly just to check on her. Stalker much? Then in a heartbeat, he pops up yet again on another woman in his life. He arrives for Allie’s baby checkup appointment only to have missed it (and several prior appointments). He promises that he won’t miss another one, but we know that’s impossible. Weller really believes he can save the world, be a father and drink a six pack at the same time.

So I’m a fan of a Zapata-Reed romance, but their current awkward stage is killing me. Zapata wants to just be friends, Reed is trying to act like it’s all good, what was once sweet is now very awkward. Speaking of awkward, am I the only one concerned for Patterson? She’s the most victimized member of the team and she always goes into work after her trauma, her teammates always say “you should be home resting” but they have yet to send her on vacation and some therapy sessions.

Shepherd’s plan is still rolling along and you can tell that the team is on edge. Stepaluv, a man thought dead by the FBI has surfaced and it’s for something big. After further research, the team tracks him down to be hanging out with the same CIA agent that tortured Jane for info and beefed with Weller in Bulgaria. The CIA agent is using the promise of fixing his son’s heart in exchange for Stepaluv to give up information about the bomb. Great idea until his son dies in surgery, at which point the deal is off, leaving the team to save the world in a matter of hours.

Weller and Nas get a lead and go to a warehouse filled with basketball bombs. They soon discover that the balls have been sent the school of the CIA agent’s daughter, with Patterson’s help they deactivate the bomb in a nick of time. Then things get a little tense when the agent’s daughter gets taken hostage. Weller goes into action and gets the gunman to drop his guard enough to catch a bullet in the chest, then Jane saves the CIA agent’s life when another gunman comes out of hiding in the shadows. The agent is grateful and says thank you, but Jane — who is growing pettier these days — says to him “Don’t take it personal, I was just doing my job.” The same line he delivered instead of an apology for torturing her. Ha.

In sad news, Roman’s psychiatrist concludes that due to his upbringing, he has no capacity for empathy or love and should be locked away in isolation. Weller took time to build a baby nursery, but Allie is moving to another state with her bae. Welp. Maybe now can he and Jane get together finally? We all know he and Nas won’t make it.

In the opening scene, Borden is back and he’s acting like a boss. He even commands Parker to address him as sir. I do hope they show some more of Borden’s backstory, because the last time we saw him he wasn’t that authoritative and Shepherd was doubtful of his ability to take orders.

The next few scenes are filled with random moments. Nikki, Freddy’s girlfriend storms in demanding that Reed tell her where her man is. Weller is in his office looking at a baby nursery ad, trying to act nonchalant about the fact that his baby momma is moving to another state. Zapata pesters Reed about how his new life as a thot is going.

Finally, we get back on track to standard Blindspot when Roman solves a tattoo indirectly. Patterson and Jane comically battle as to who solved it, but the rest of the team doesn’t care. The tattoo leads to criminal Kat Jarrett and a biker gang. The team needs more intel and only Roman knows it, so his psychiatrist is called in and after showing a picture and playing audio of a car revving, Roman remembers a weapons deal. Jane gets ballsy and suggests she and Roman go in undercover and, to everyone’s surprise, Weller approves.

Jane, Roman and the biker gang roll up on the truck carrying the weapons. They attack just like in the Fast and Furious movie, but on bikes instead of sexy racing cars. They steal the chemicals and all is well until the bike gang leader says to kill the truck drivers. Jane tries to run interference but Roman who is still instinctively about that life shoots them like it’s nothing. For a minute we are left to wonder if they are dead, but thank goodness they had their vests on.

Jane and Roman continue on to meet with the biker gang to get Shepherd’s location. Jane and Roman grow suspicious, then Kat pulls a gun and calls their bluff. Roman smoothly talks her out of it and the next thing we know she is off working with Jane and Roman until she catches a bullet to the gut. As she bleeds out, Roman tells her she will be fine. In her dying breath she tells Roman that she loves him, to which Roman gets up and leaves like it’s nothing. Damn, that was so cold, I felt the chill.

Sandstorm being 10 steps ahead killed the biker gang and took the weapons, before Weller’s team arrived. No surprise there. After yet another major setback, Weller says he will cover for Nas (again). Nas then determines that they both cloud each other’s judgment and it’s best that they stop seeing each other. *eye roll* Nas, just admit you weren’t that into him anyway. Weller again loses another lady in his life.

For part 2 of this episode’s randomness, Reed — with his shirt opened looking sexy — opens door to a flustered Nikki and next thing I know he’s taking her to bed. I literally shouted at the TV “Noooo!!” What about the guy code? The random continues when Jane pops up to Weller’s place, price of entry? A six pack. She offers to help him comb thru Nas’s file on him and picks up his academy yearbook. She flips through a few pages and stops at one of Weller hitting a 3 pointer…as Sheppard smiles on in the crowd. Wait, what? Is this really how we are going to introduce this detail? I’m glad more of Weller’s connection to this whole thing is finally coming out, though. I hope they don’t get as random with the Weller is a spy story suggestion as they did with Reed now banging his good friend’s girlfriend.

Charlie Barnett Plays the Role of a Lifetime in ‘Ordinary Joe’