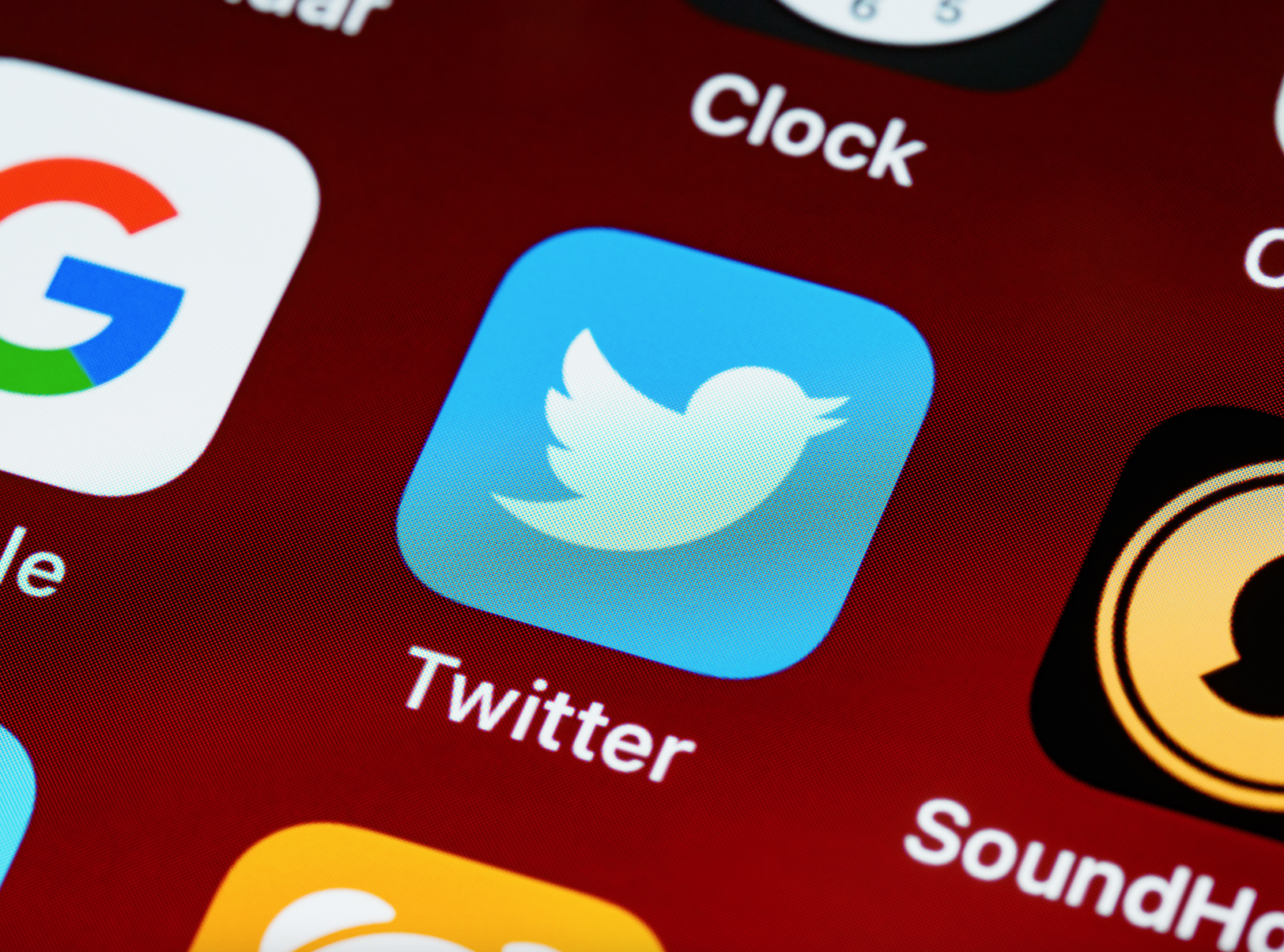 I think it’s safe to say that if you had never been on Twitter prior to this week — that is no longer the case. 😅

It’s time to talk about the man who practically thinks he’s the real-life incarnation of Tony Stark. The man who brought you electronic luxury vehicles. The man who founded a whole spaceflight company and wants to send you to Mars. 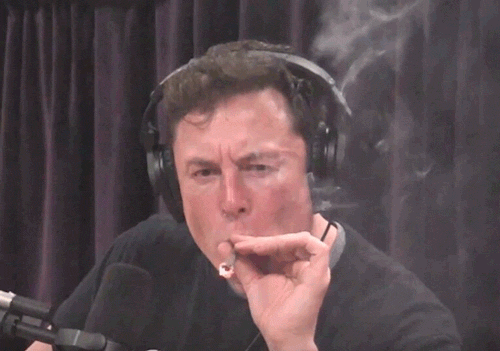 Do I even have to say his name? Let’s seriously unpack this for a second because this is wild!

Can you imagine what you could buy with $44 billion dollars?

Oh, yes! Did you know that Sri Lanka has a debt amounting to a whopping $35 billion?

Recently, the country has been seeking support due to its struggling economy and other issues that have begun to arise throughout its debt crisis: food shortages, power cuts, and street protests.

With $44 billion, Elon could have paid the debt of an entire nation.

Just let that sink in for a minute.


#2: A Laptop for Every College Student on Earth

As in Planet Earth, people! It has been reported that there are approximately 250 million college kids studying around the world today. That $44 billion could’ve afforded a decent Chromebook for each of these students and Elon would still walk away with some change left to throw an after-party!

It has been reported that America loans an annual total of $45.3 billion to 44.4% of all postsecondary students.

I can’t even begin to process the fact that it is possible for a single human being to be capable of wiping out a year’s worth of student debt for almost half of all graduate students in America.

Which tier of the flex hierarchy does this fall into? Can someone please tell me?

Anyway, at the end of the day, we can’t control how people spend their hard-earned billions.

So, how did we get here?

Believe it or not, this isn’t the first time Elon Musk has considered buying Twitter. He’s been a big fan of the platform for years and staunchly believes that Twitter plays a great part in protecting free speech and free information.

The first time Musk publicly inquired if Twitter was for sale was in this tweet exchange with @redletterdave back in 2017:
​​ 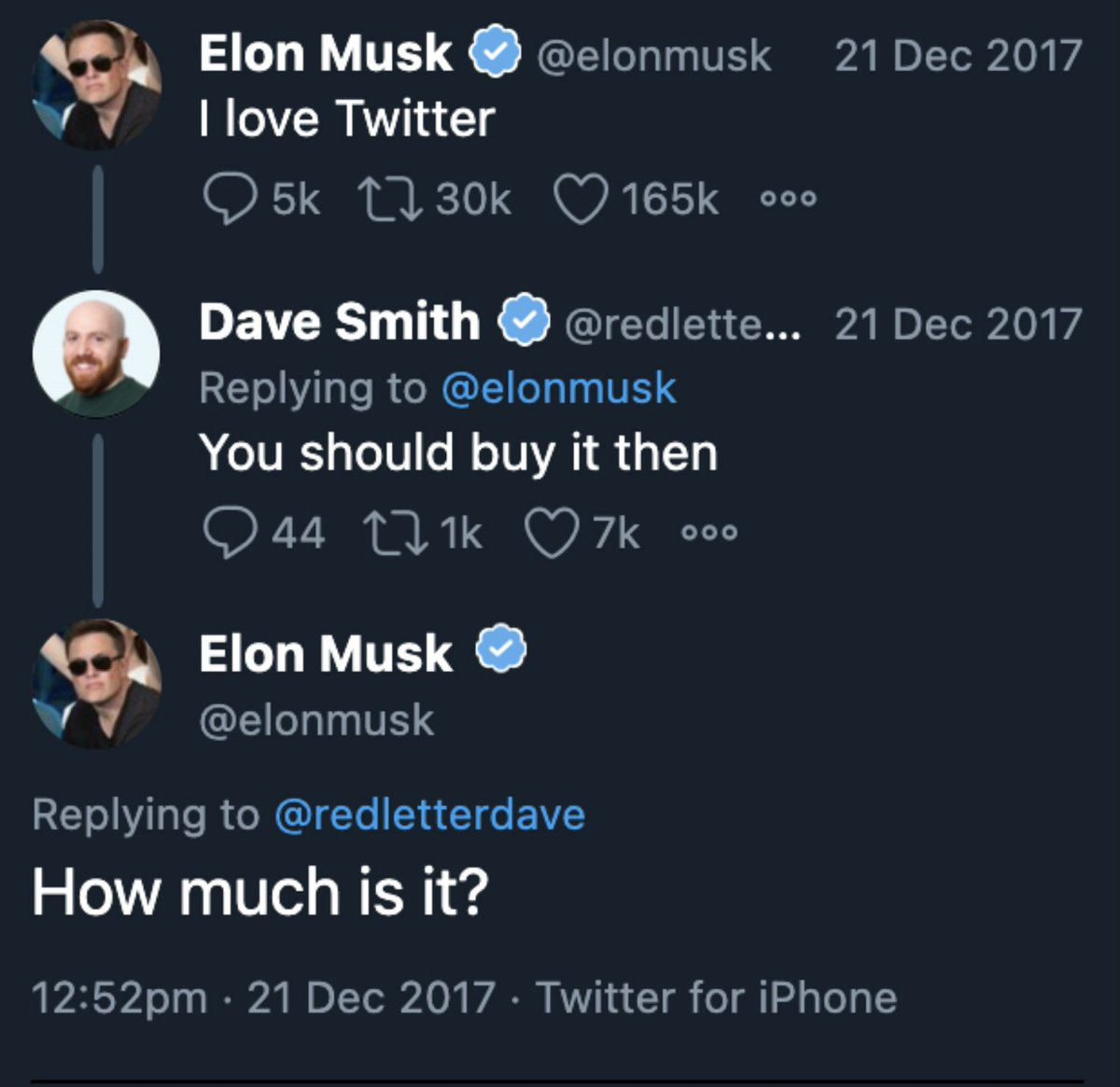 Many thought the tweet to be a joke at the time, but, in retrospect, it is very possible that Musk has been eyeing Twitter as his next acquisition target for longer than we realized.

Well, it appears that the straw that finally broke the camel’s back came from Twitter itself.

In recent years, Elon Musk has been very transparent about his growing discontent with the platform when it began to censor users and suspend accounts without notice or explanation.

Twitter’s content moderation didn’t entirely come out of the blue, however.

No social media platform is perfect, but Twitter has continued to face a growing conundrum since its inception.

Despite being a hub committed to freedom of speech and expression, the platform’s flaws began to surface when it was exposed that there were an increasing number of accounts/users promoting terrorism and recruitment for ISIS in 2015/2016.

Additionally, due to the drastic rise in  “fake news,” Twitter has ramped up its moderation of content and accounts in order to prevent the spread of disinformation on the platform.

With over 200 million users around the world, many argue that Twitter can be a wondrous gift and a curse. Now it plays an ethical role in ensuring accuracy of information, fact-checking claims to uphold public safety, and protecting the values that democracies hold dear.

So, what’s the big deal?

Elon Musk believes that Twitter has gone too far with its censorship and, if it goes unchecked, the platform could be doing a disservice to social discourse and free speech.

He has also gone on record to blame Twitter for the rise of Truth Social, Donald Trump’s social media platform, and indicated that it wouldn’t have come to fruition if Twitter had been more neutral in the past and politically nonpartisan.

He later issued a letter to Bret Taylor, Twitter’s board chairman, that expressed his discontent with the platform as well as his desire to take the company private: “I invested in Twitter as I believe in its potential to be the platform for free speech around the globe, and I believe free speech is a societal imperative for a functioning democracy. However, since making my investment I now realize the company will neither thrive nor serve this societal imperative in its current form. Twitter needs to be transformed as a private company.”

Imagine being so angry at a multibillion dollar company that you resort to buying it out completely.

As for Twitter—how did they respond?

Their board of advisors decided they weren’t going down easy, so they tried to curtail Musk’s acquisition efforts by initiating Operation “Poison Pill,” a defense tactic that would “flood the market with new stock that all shareholders except Mr. Musk could buy at a discounted price.”

Therefore, share prices would rise above current levels and would force Musk to buy Twitter at a higher premium.

Honestly, I’m still side-eyeing Twitter for pulling such a questionable mechanism as it does negatively impact fairness for all shareholders and make a stock more volatile.

With that said, poison pills have been legal since the 1980s and were designed to help companies protect themselves from hostile takeovers and acquirers.

Shortly after Twitter’s board of advisers unanimous decision to sell broke the news, Musk announced a few of the changes and initiatives he wanted to bring to the platform via none other than his Twitter account: 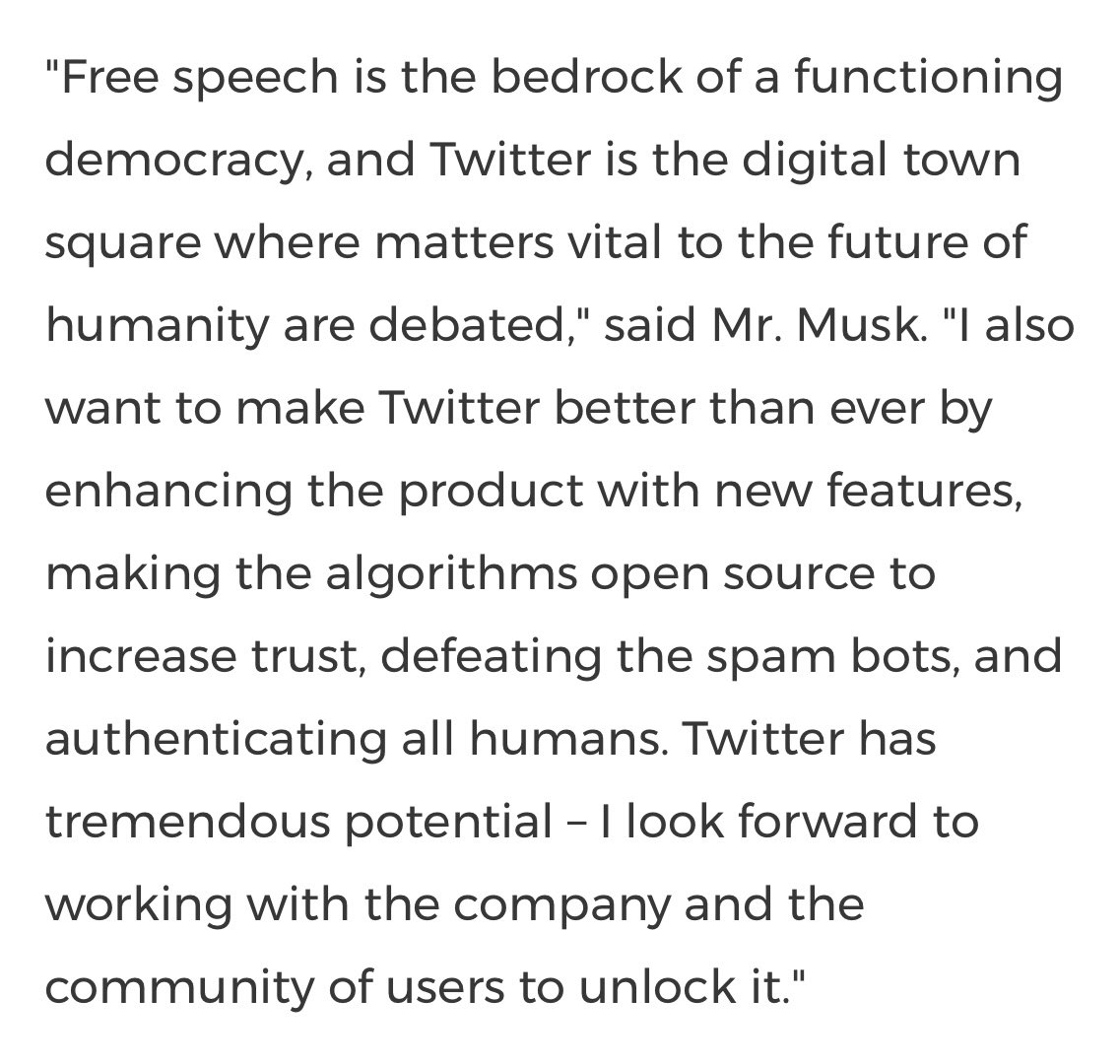 Since then, Musk has expressed interest in the following:

The future of Twitter is still uncertain, but we’re in for an interesting ride because there’s still the possibility that Musk could walk away from the deal.

There are so many questions to be answered, but what are your thoughts — is this the change that Twitter finally needs? Is Elon Musk the right man for the job?

Drop those comments on our social media channels!