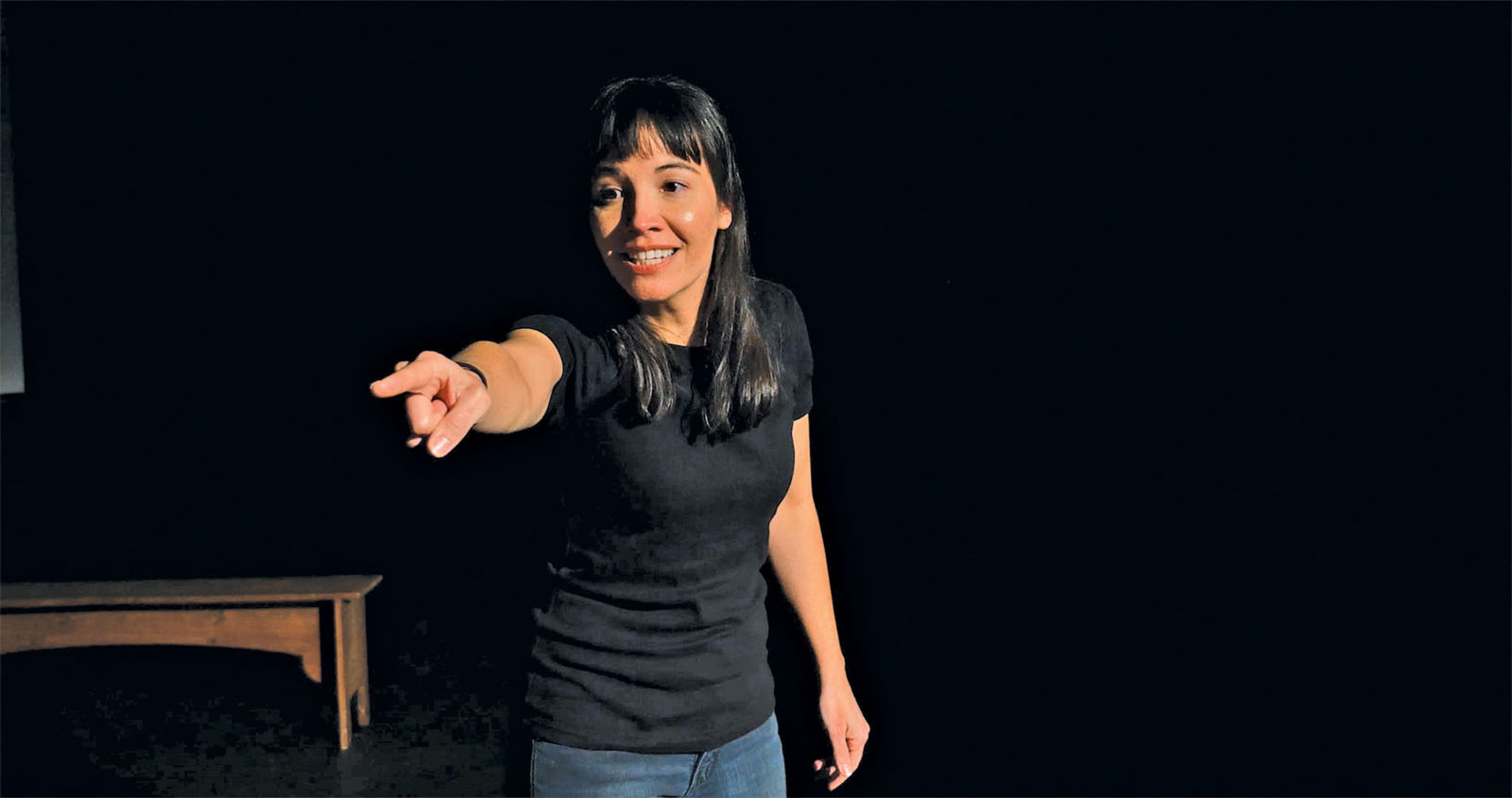 The Earth, glowing blue and green as viewed from space, transitions into a stage backdrop screen. A woman wearing a goofy alien explorer mask peers quizzically out at the audience. “What are you?” a deep voice booms, omnipotent, startling her. She doesn’t know how to answer. “Where are you from?” the voice asks again, a kind of challenge. The mask comes off and we meet Elizabeth “Lisa” Liang, a tall woman with shoulder length hair, bangs, and multi-ethnic features. She begins telling us about her globally nomadic life. Alien Citizen: An Earth Odyssey is professional TV and theater actress Elizabeth Liang’s (The West Wing, Law & Order: L.A.) one-woman memoir show that has traveled around the world as much as Liang did growing up. This is the first time the show has been available on DVD and VOD.

Third culture kids, or TCKs, are people who spent their developmental years growing up in places that aren’t their parents’ home or passport countries. TCKs are known for their adaptability but also their various identity and other emotional issues that develop as they straddle and negotiate multiple worlds and cultures simultaneously. This is particularly real for the generations of TCKs like Liang (and myself) who grew up before social media was around to help maintain long-distance relationships. Immigrant and refugee kids are also growing up in the so-called third culture. And like most TCKs, Liang’s story is unique. Born in Guatemala to a Chinese-Spanish dad and Bostonian mom of mixed European descent, Liang had already lived in six countries — Guatemala, Connecticut, Costa Rica, Panama, Morocco, and Egypt — by the time she was 13-years old. Her dad worked for Xerox, and she lived around the world as a “business brat.” 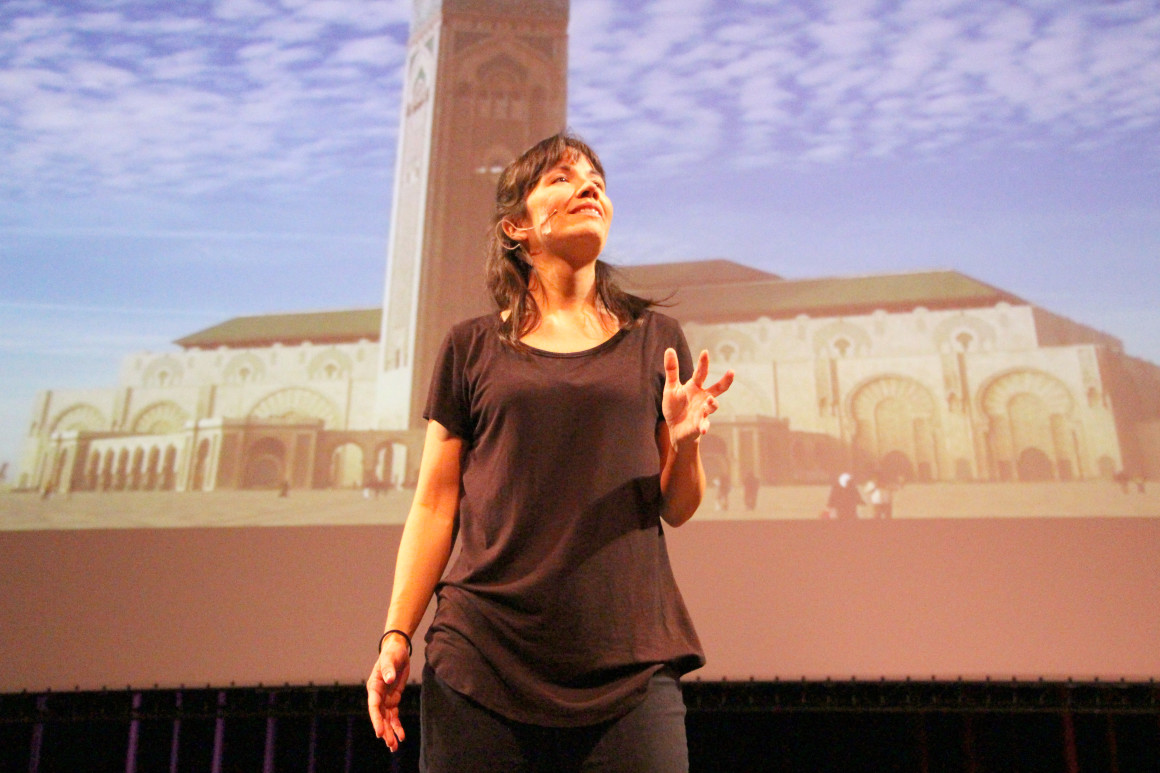 Alternating between compelling stories about her experiences in each of these countries and the more painful aspects of being a third culture kid, Liang lays out a kind of skeleton for the “typical” TCK experience. It’s one that shuttles between gratitude for the privilege of getting to see and live so much of the world from childhood to the simultaneous psychological damage that happens when you grow up without a fixed sense of identity or home. Liang’s performance brims with empathy and compassion, not just for her own story but for the stories of all the TCKs who would see themselves in her as I did.

During Alien Citizen Liang often remarks about being racially ambiguous and how it made her feel unseen. I’ve never seen myself as a third culture kid represented so clearly on any screen, even though Liang and I lived in different places and have different racial backgrounds. Once more for those in the back: representation matters. It’s the difference between feeling like an alien one’s whole life as Liang (and I) did and feeling like there is space for belonging.

Told in beautifully written and poignantly acted vignettes about her life, Liang’s show is dynamic and vivid. She uses her physicality to marvelous effect as she embodies each of the different people she’s encountered, from her family and friends to everyone else in between, with vocal precision. Alien Citizen often reminded me of John Leguizamo’s one-man shows in how Liang truly becomes these other people who played pivotal roles in her life without costume or makeup changes.

And in the current #MeToo climate, Liang’s segments about street harassment are powerful and timely. She hit puberty while living in Morocco, and as she’d walk from her home to school she quickly came to understand how dangerous it can be to inhabit a female body. Even as a pre-teen, men would verbally assault her on the regular unless her brother or father was with her. She couldn’t help but internalize this misogyny until one day at age 13 she snapped and spoke back. This bold move resulted in Liang and her mother being physically threatened by two men until another man showed up to chase them off. This was a new level of psychological and social trauma to add to Liang’s emotional baggage that simply comes with life as a global nomad since childhood. I also hit puberty while my family was living in the conservative Muslim country Pakistan, and my reaction to the experience was eerily similar to Liang’s, especially in the long-term.

In fact, I found myself nodding along to so many of Liang’s anecdotes and analyses about her experiences, even though we have a vastly different catalog of places we are from and lived. From racially targeted bullying at school for being different, living in multiple languages, developing an eating disorder as a coping mechanism, and unresolved anger and grief to escaping in books and eventually theater and writing to make sense of our otherness no matter where in the world we go — Liang is a soul sister I didn’t know I had. “I am not from a place,” Liang says, tears glistening in her eyes. “I am from people.” That is the best one-line description of the third culture kid experience I have ever heard.

Alien Citizen does an excellent job with the lighting and set design to take us on Liang’s travels around the world. Using backdrops from places she’s talking about, set to clever sound effects like a Xerox machine copying a page as Liang transitions from one home to the next, adds so much realness to this third culture voyage. I feel like Liang is someone I actually grew up with even though we’ve never met. I was particularly moved by her closing monologue, where she pulls out imaginary shards of glass representing all the difficult things from her childhood she had avoided processing. Through vocalizing her pain, she was able to heal. I could feel similar shards in my own body begin to ache. It was so inspiring how Liang is often able to find the comedy in uncomfortable situations. Alien Citizen is heart-wrenching and painfully honest, but it is also really funny. I couldn’t help but think of Jim Carrey in Kidding, a production that balances these very same themes. 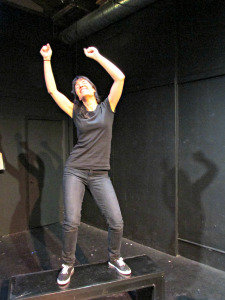 There is so much packed into Alien Citizen’s 90 minutes, but it isn’t overwhelming. Liang’s storytelling is natural and fresh, like she is sitting down with friends and talking about how she got here. Her stage presence is magnetic, and her charismatic performance works as both a play and a movie. This is no small feat. Sofie Calderon’s directing is spot on. I can see why so many high schools, universities, and other forums have hosted showings of Alien Citizen. There are so many third culture kids in the world, and Liang’s show encapsulates so much of our collective experience, even if individual details are different.

To bring this point home, the Alien Citizen credits feature snippets from other third culture kids discussing their upbringings and where their story intersects with Liang’s. We might have backgrounds and childhoods that are alien to some, but in-group we make perfect sense. Alien Citizen will help anyone confused by what it means to be a Third Culture Kid understand both the hardships, as well as the joys of this kind of life.

Alien Citizen: An Earth Odyssey is available to rent via streaming and on DVD, which includes a teaching toolkit as well as interviews with Liang’s family.