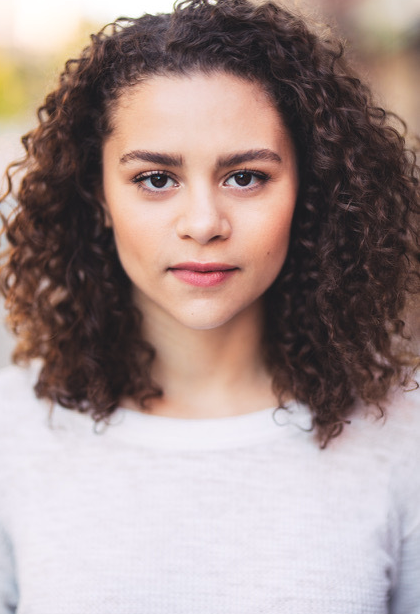 In the first five minutes of NBC’s La Brea, a giant sinkhole appears during the morning rush hour in LA and transports victims back in time to the prehistoric age. One of those victims, Veronica Castillo, is a young woman with a secret. Lily Santiago plays Veronica Castillo brilliantly. BGN spoke to the female actor via Zoom about transitioning from working in New York City theater to her first regular series role on a network show.

What’s been the most exciting part of Veronica’s journey?

She has the potential to be the “bad guy.” It’s been exciting for me to discover my ways to justify her actions. I look into her learned behavior and find the best ways to make her seem human and relatable, showing her as a survivor rather than someone who’s just acting bad.

Are you having fun acting bad?

Oh, absolutely. I get to hit somebody in the mouth or hit somebody with a stick. I’m having fun just cracking up afterward. And I’m so grateful. By the way I’m actually not like my character, but it’s fun.

You have the freedom to play “the bad guy” without being a stereotype. So it’s not like the only person of color is doing all the nasty stuff. How does it feel to be working on a show that reflects real urban life?

Honestly, it’s incredible. I feel so lucky. It’s slow but the world is changing. Initially, not knowing what the cast was going to look like — I knew we had a core “white” family — I was a little nervous if I’m honest that it would look like a lot of what network TV wants to look like. I’m so relieved and excited about what La Brea is doing. Every episode we’re meeting a new character, and there’s never an assumption that it will be a white character or a “white story.” We’re not centering white stories. We’re saying look at the diversity of humanity and people and all their different complexities.

With a multi-ethnic cast, we’re actually able to “see color” and people with nuance and complexity instead of seeing one person of color filling a slot as a diversity candidate in the storyline.

Nobody’s in there just placed to be the “color” in the cast. Everyone has a whole life and a fleshed-out storyline as you mentioned before. It’s such a relief not to have to play the stereotypical angry Black woman. We’re all surviving. We all have families and deep emotions and things we’re struggling with. I’m so relieved to be a part of that and to be seeing it happen.

What has been the most significant asset from working in theater as you work in television?

I’d say figuring out how to preserve my energy. In theater, you’re on a nightly journey, and you do it once. On TV, you’re doing the same scene over and over. I sprained my back working on this show, digging a ditch and overextending myself. It was a learning curve. I had to hurt myself to be like, next time I’ll find out precisely what they’re filming, so I don’t pick up all this dirt for no reason.

What’s been the best asset coming from a theater family?

Just the amount of resources available to me from my dad [award-winning actor/writer/director Ruben Santiago-Hudson] and being able to talk to my brother, who is also an actor. My family gets it. I know many actors struggle with not being able to talk to friends or family about working in the industry because they just won’t get it. They don’t know how much energy it takes, how much love we put into this, how vulnerable it is exposing yourself. I feel fortunate to have that family support in my toolbox and also the drive that I got from the theater, my process. I credit it all to my theater training. I care so much about knowing my character and remaining truthful. If I didn’t have my theater training, I don’t think I would be able to dive as deep into the script and figure out the intention behind every word.

It’s my family. Tonight’s closing night of my dad’s Broadway play Lackawanna Blues. So that show is just a reminder to me of the people I come from and the fact that I can have faith in humanity, that I can trust that people are good and care for each other. That’s what’s bringing me joy. There’s so much that I can look at in the world anytime that can bring me down, but it’s such a peaceful reminder that not only is it found in my family, but it’s just part of humanity.

La Brea airs Tuesday nights (Fall 2021) at 9:00 pm EST on NBC and streams the next day on Peacock and by subscription on Hulu, Apple TV+, and other streaming services.