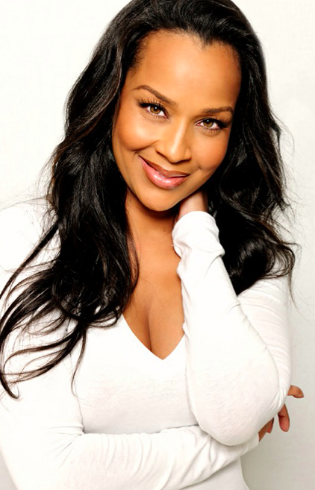 LisaRaye McCoy is a brand. The actress and reality star plus entrepreneur embodies this when she talks about her projects, as she did this week with BGN.

Whether that includes hosting BET’s true crime series Murder in the Thirst, co-hosting FoxSoul’s Cocktails with the Queens, guest starring on HBO’s Ballers, preparing for an upcoming Netflix series debuting a new jean line (PZI jeans) in early 2021 or putting a mattress and furniture line (LR Homestyles in 2020) in brick and mortar, she’s a woman of many trades.

And McCoy still does the traditional acting, like, starring in BET’s Christmas rom-com movie, Holiday Heartbreak. In it McCoy plays the ex-fiancee of a man who’s done wrong to a lot of ex-girlfriends and lives to regret it when his daughter grows up. McCoy’s character goes a long way in helping him see the light.

First question: Was it a coincidence that the sir name for this family is McCoy?

When I read the script, I was like, “McCoy, oh!” I didn’t know they were going to get me for the script but fortunately, they had done the script months before I was even on board.

They did always have me in mind to play this part. We came up with the character look, which is a different kind of character look for me.

Christmas films are always very popular, but why, in particular, did you choose this one?

We filmed in the middle of the pandemic, and we filmed in the D.C. area. That was part of, “I’m tired of being locked down.” Then I read how cute the script was. I love messages that are not shoved in your face. You are enjoying the film and when this awesome message comes around, you think, “Oh, that’s a feel-good message.”

The message is what goes around comes around. Be careful of how you treat people because people will treat you the same way. Don’t break anybody’s heart over [nothing] because people are watching you as a living example, i.e., your family.

I play an ex of the lead. Michael Colyar plays the lead. He breaks my heart, so I cast a spell on him [regarding] his womanizing past. I say, “Everything that you have done, your daughter is going to go through the same thing.”

So as the movie goes on, you see his daughter with someone he doesn’t necessarily approve of—with cause—and it causes him to go back and apologize to all the women he has hurt.

I was surprised to see you in gray braids. You’re going for more of a character role in Holiday Heartbreak. Is this something you are more open to now?

When I saw her little face, I thought that she needs to know who I am, know my work, and what I’ve done. There is a passion there, but I also have a passion for business as well.

The pandemic has allowed me to sit back and say I have something else to bring to the table and some other things that I want to explore, other possibilities and things that I want to try that I have been holding inside. I don’t know, maybe the fear had taken over of not being able to do it or that an idea might not be accepted.

My partner is really the one who came to me and said, “Hey, I think we can do something together.” He is great; he just put himself on the front line and really did this store [LR Homestyles in Los Angeles’ Beverly Center]. I couldn’t be happier about it because it allows me to work on legacy and have another income stream. So I feel more confident in my abilities as an actress.

You are always involved in a ton of projects: fashion lines, reality TV. Acting in movies is just one. With Hollywood going more woke, would you still advise someone starting out to get involved in a lot of income streams?

Yes, especially with social media. They can find talent in a blink of an eye and they’re more expendable now — whether it’s YouTube or Instagram, even TikTok, now. You’re able to find talent in so many different ways. Sometimes their team doesn’t know what to do with the brand and what to pull out of you.

So you’ve got to keep people around you who are just as creative as you are. With so much competition, you’ve got to be able to solidify your lane. Some things are better than doing one thing, always.

Speaking of collaborating, you are working with a female director in a project written and produced by women. What would be the pros and cons of that?

When you have a female director, there’s a sensitivity there because she is a woman. She knows how we feel if our hair is out of place, our clothes don’t fit well, or if we just get up on the wrong side of the bed with those hormones. She understands that.

You know how men are. Men are from Mars, women are from Venus. Just like relationships, male directors do things differently. So the female [director’s] mind and anatomy works the way ours do.

The movie is about male/female romantic relationships. Why are they always so hard?

Girl, if I could figure that out, I’d be married. The idea is not to bring so much garbage to our relationships. That means realizing who we are and what we are bringing to the table. It can’t be all one-sided. If you are looking for happiness in someone else, you’ve got to be that by yourself. Know who you are and what you want so when you come together you can have plans to build together.

That’s what I’ve learned over the years. Ultimately, I do want to be in a relationship where I can grow and we can teach and help each other grow together, but I’ve definitely learned from my past relations. The karma that has caught up with me has taught me, “That wasn’t really cool, and you need to change that,” or it has made me adapt to certain things.

You’ve always been so outspoken on so many things, telling your truth. Does it ever worry you regarding your career? Hae you had those times when you think, “Maybe I shouldn’t have said that”?

They knew I was on a gossip talk show where everybody knows that their business is not protected. That’s what it is, but when they took it and fueled it, I didn’t like that and it  made me feel very bad. I didn’t want Halle to believe that and take that and run with it, to fall for the okey-doke.

So I went to social media on this and said, un huh. [Berry] is closer to me than not. She’s a black woman. She is an actress. She is a person who has paved the way for me. And I loved the way Halle clapped back because she clapped back so eloquently.

Was it a little distasteful? Yeah, I can agree to that. Am I sorry about what I said? No, I’m not because I absolutely remember that story.  But again, being in the business I’m in, I’ve got a thick skin so things that maybe should bother me, don’t.

But it does put things in perspective because it helps you know what people think of you, what they are saying about you. I was able to tell Halle, “No, that’s not the way I meant it.” So I walked away from that situation knowing, just watch what you say and how you say it.

Holiday Heartbreak premieres Wednesday, December 16th on BET and BET Her at 6pm ET/PT and on BET+ on December 20th.