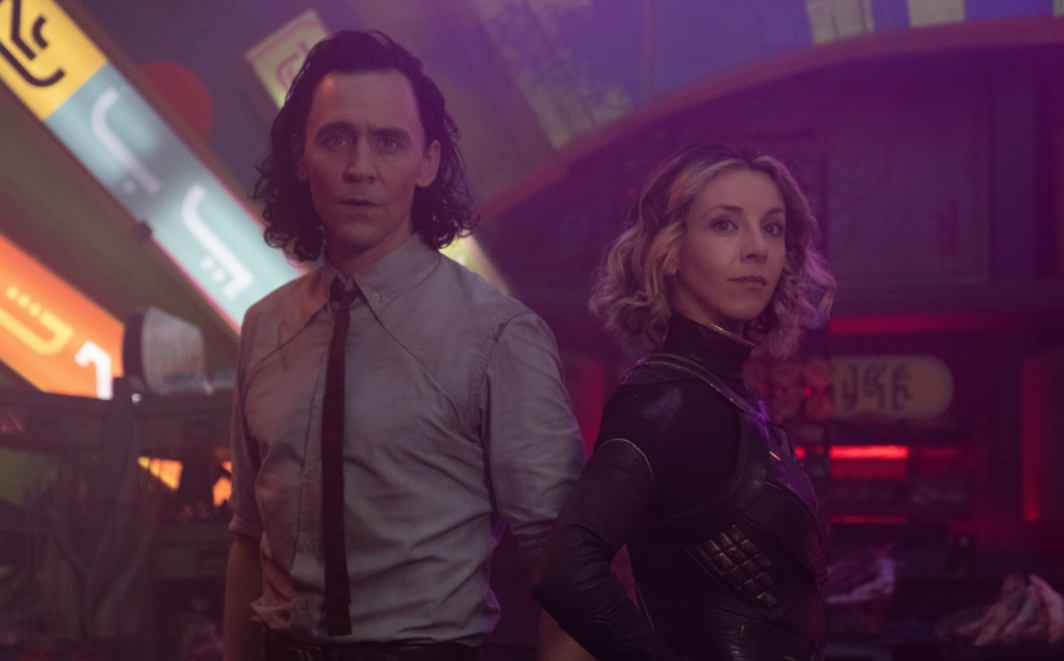 The variant has a drink with a young lady and repeatedly asks her how to get to the Timekeepers. In fact, Lady Loki is using her magic to infiltrate the commander’s mind to get information.

The variant appears into the TVA and immediately tries to take out a guard with her magic but soon realizes that magic doesn’t work. Instead, she fights her way to the golden elevators that are guarded.

Loki is surprised to find himself back at the TVA. He grabs a couple of weapons and follows the path of bodies. Once he gets to the variant, Loki, with weapons out, begins to question the variant on if she’s really a Loki. The two fight and Loki continues to persuade her into helping him get to the TimeKeepers. The two are interrupted by Ravonna and two guards. The variant threatens to kill Loki but that falls on deaf ears. Loki uses a tempad to get them out of the situation.

The variant tries to get the resetter and make Loki disappear but it is low on battery. Loki snatches it and hides it on himself. He also finds out that the variant doesn’t like to be called Loki at all. The two are about to fight again but a meteor stops them in their tracks. It would seem that Loki has sent them to Lamentis-1, 2077, and they are about to experience an apocalypse.

The variant informs Loki that if the tempad blows up, they both die. The two rush to the safety of a mining shaft from the apocalypse outside. Inside, the variant attempts to use enchantment on Loki, but Loki points out that it won’t work on him. She breaks out her weapons. He does the same but points out that it is pointless for them to keep fighting. The variant is determined to get the tempad from Loki and is willing to kill for it. The two argue back and forth about what to do. The variant informs Loki that he ruined a plan that she had in the works for years and once they get back to the TVA, she’s going to finish what they started or kill him.

The variant leaves the mining shaft to find a power source at a nearby town, with Loki right behind her. She informs Loki that she prefers the alias Sylvie. The two find out about a train that could possibly power the tempad. Loki disguises himself as a guard and feebly gets them on a train. Sylvie calls him out on his lack of planning. On the train the two get to talking about their families and how they were raised. Sylvie was told she was adopted and taught herself magic. Loki asks Sylvie about her love life and who is waiting for her, and she asks Loki if he has a prince or princess waiting for him. Apparently, Loki has a bit of both but no one concrete. Aww, that’s kind of sad. Our sweet prince doesn’t have a concrete relationship.

Sylvie wakes up to to Loki singing, dancing, and drinking with the people on the train. Loki sings a beautiful Asgardian song but doesn’t notice a few people eyeing him suspiciously. Once he is done, Slyvie chastises him for not keeping a low profile and being drunk. Loki doesn’t pay attention and gives Sylvie a metaphor on what love is. The two are interrupted by guards that request their tickets. Loki and Sylvie fight the guards magnificently, but Loki is thrown off the train and Sylvie jumps after him because she needs the tempad. When she reaches Loki, she pulls out a weapon and demands the tempad. Unfortunately for both of them, the tempad broke when Loki was tossed out the train.

Upset, Sylvie calls out Loki for not being serious and jeopardizing the mission. He counters by pointing out her mission is futile and she can’t beat the TimeKeepers. The two take a short break then think over a plan on how to get off the planet before it is destroyed by the moon. They are going to take a broken ark off of the moon.

On their walk to the ark, Loki asks Sylvie about how she uses enchantment on people. Sylvie breaks down her method, which includes using someone’s memory. She mentions how she struggled to get the commander’s memories due to how far back she had to go to get memories that the commander had when she was on Earth. Loki is surprised to hear this because he was told that they were all created by the TimeKeepers to work at the TVA. Sylvie points out that they are all variants like them. Loki concludes that they don’t know that. Damn.

At the site of the ark, Loki and Sylvie search for a way to get to the ark admidst protests and fights. The moon is closer to the planet, and all hell breaks loose. The two fight their way to the ark but once they reach it, the ark is broken by a meteor. Loki watches in shock while Sylvie walks away.

Perfect episode for the two Lokis to get to know each other. I wonder how Sylvie’s childhood went. If she is so against being called Loki, then what happened for her to be the variant that is being chased by the Timekeepers? It was nice seeing Loki sing and dance for once but knowing that there is underlying pain there makes it sad. I do hope he finds love. Sylvie said that the TVA is just filled with variants running it. If that’s the case, what is the TVA and who are the TimeKeepers really? I would find it wild if one of the TimeKeepers is an original Loki or something.