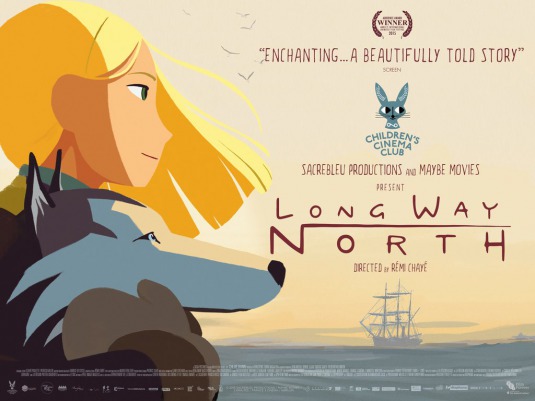 Long Way North is an animated feature that will inspire you to see the strength in yourself!

Set in late 19th century St. Petersburg, Long Way North follows Sacha, a 14-year-old girl from the Russian aristocracy, dreams of the Great North and anguishes over the fate of her grandfather, Oloukine, a renowned scientist and Arctic explorer, who has yet to return from his latest expedition to conquer the North Pole.

I really enjoyed the simplistic animation of the film, which looked like Japanese clip artwork, as it helped coincide with the film’s historical storyline and ancestral concept. Sacha has always been fascinated by her grandfather’s adventurous life and has the same calling as Oloukine to be an explorer. Sacha’s parents, however, have already made arrangements for her marriage, which she strongly disapproves of, to say the least. Defying her parents, Sacha flees her home and launches an adventure-filled quest toward the Great North in search of Oloukine and his ship.

Both English and French language versions of the film are currently showing in U.S. cinemas and this Oscar-nominated entry is set to be released on Blu-Ray mid-January 2017.

Cartoons aren’t just for children anymore. Everyone is trying to find their path in the world and this story of Sasha is a tale of how you can achieve your dreams, too.

This spirited and inspiring tale of hope and courage features the directorial debut of lauded animator Rémi Chayé. Long Way North is the winner of an Audience Award at the Annecy International Animation Film Festival, winner of Grand Prize and the Governor of Tokyo Award at Tokyo Animation Festival 2016.

I watched the French version of the film, but I’m hoping everyone can see the truth to my words by watching the movie for themselves.

Long Way North is rated PG and has a runtime of 80 minutes.Christina Angela Jeter is an avid reader, lover of NOLA (New Orleans, Louisiana) & Halloween Horror Fanatic. You can follow her on Twitter: @cjeter

Review : Valerian and the City of a Thousand Planets