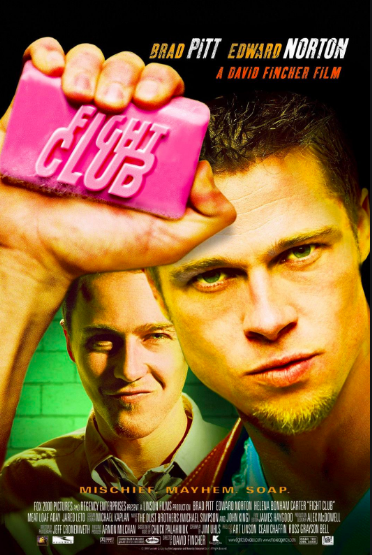 “People are always asking me, did I know Tyler Durden,” the Narrator (Edward Norton) says in Fight Club before he comes to the realization that the underground boxing club leader is in fact himself.

We know Tyler Durden splices single frames of pornography into family movies. He pees in soup at his catering job. He started underground boxing clubs for disaffected young GenX men like himself because he feels the world shafted him, and he’s very pissed off about it. We already know a lot about this agent of chaos whose control demolition self is also played by a super-ripped chipped-tooth Brad Pitt, this lost boy whose untreated mental illness sparks a revolution. But how often do we stop and really consider the woman at the center of it all, Helena Bonham-Carter’s nihilistic Marla Singer? Not often enough, even though David Fincher’s social satire deconstructing toxic masculinity would not pack the same punch — pun intended — without Marla’s commanding presence.

Marla Singer is much more than the thorn in the Narrator’s side as she exposes the truth of his lies at health support groups. This foul-mouthed, chain smoking, thrift-store master with expert smokey-eye makeup and a penchant for terrible decision making is the actual axis Fight Club turns on rather than the Narrator or even Tyler himself.

“Marla’s philosophy of life is that she might die at any moment. The tragedy, she said, was that she didn’t,” the Narrator muses, trying to make sense of this woman who saw through him in a way nobody else ever had. In this particular reflection, we see the very seed of Tyler’s fight club begin its toxic bloom. For Tyler and his alter-ego, fighting was a new acknowledgment that they would one day break and eventually die. The fear of that inevitability was what had all these men grasping for the comforts of an IKEA-furnished home and a wardrobe of respectable designer suits.

But Marla was already long past that philosophical turning point. “At least she’s trying to hit bottom,” Tyler says to the Narrator as if this is an actual character bonus. But here’s where he is way wrong: Marla is not actively trying to destroy herself. She is doing what she needs to in order to survive. That she’s bottoming out isn’t where she wants to be, like it is for Tyler and his cohort. Marla is simply making the best of an already-bad situation. Right here is the difference between the lost boys of Fight Club and its one representative lost girl.

Tyler and his troop of lost boys need to hit each other in order to feel emotions, and they need to blow things up in order to feel important. The pain of lost boys needs external outlets. But lost girls are the opposite. Lost girls turn their pain inward like Marla does, with risky behavior, self-harm, drug abuse, and partners who take advantage of their vulnerability, exploiting it for their own nefarious ends.

We know that Marla was already sexually “active” in grade school, and this early childhood sexual abuse could be either a major or contributing factor to her lost-girl status as an adult. For me, Marla’s abusive relationship with Tyler comes to a head when she tells her version of why the vintage pink bridesmaid dress she paid a dollar for found its way into a thrift shop. The metaphor she uses to describe it is, “tossed at the side of the road, like a sex crime victim, underwear inside out, bound with electrical tape.” The Narrator responds by telling her it suits her, in yet another cruel jab taking Marla’s self-esteem down another peg, especially considering that her history with sexual assault didn’t end in grade school. Tyler is abusing and gaslighting her for the duration of Fight Club after all.

“She’s a monster! She’s infectious human waste! Good luck trying to save her!” Marla screams about herself as she overdoses on Xanax, abusive language Marla has internalized that Tyler Durden himself co-opts and weaponizes once his fight club turns into the guerilla warfare group Project Mayhem. Tyler uses the terrible things people have said about Marla to dehumanize his crew of men who have been told the world still owes them something. Tyler’s own personal style even begins to mirror that of Marla’s flamboyant wardrobe as the movie goes on, with one of his final appearances featuring him in a fuzzy coat just like the one Marla wears. Marla is the true mastermind in Fight Club. Tyler Durden is an unoriginal hack.

When Fight Club first came out it was met with huge outrage and shock by critics who didn’t understand the social satire critiquing toxic masculinity. Many of its male fans rushed to deify Tyler Durden, missing the point of the story entirely. In a 1999 New York Times article, Fincher came right out and said, “Women maybe get the humor faster,” which we do, and that it was actually the female fans of the movie who “appreciate the film’s satirical spin on macho posturing.” He’s right.

On the film’s release in theaters in 1999, I was an immediate fan and went to see it multiple times, with both guy and women friends. After one viewing, my friend Wendy and I decided that we were going to start a female version of fight club. As we squared off with each other, our friends watching and wondering if we’d actually go through with it, Wendy and I chuckled and just hugged. Unlike the men in Fight Club, we as women we didn’t need to hit each other to feel something. We already felt too much.

We already knew each other’s pain intimately. We even had our own real-life versions of Tyler Durden hurting us back then. So why would we add to each other’s suffering with added physical violence? Our male friends laughed at us “chickening out.” But we chicks knew better. We understood the movie in ways our male friends did not and a female fight club defeats the purpose of Fight Club’s message. “When the fight was over nothing was solved,” the Narrator says. “But nothing mattered.” As young women growing up in a world that constantly reminded us of how little we mattered in real life, we didn’t need to fight another woman, for any reason at all. It was a moment of pure enlightenment I’ll remember and reflect on for the rest of my days. We have Marla Singer to thank.

In honor of Marla Singer on Fight Club’s 21st birthday, I propose a ninth and final rule of fight club: You aren’t allowed to call Fight Club your favorite movie unless you acknowledge the fundamental truth of its feminist social satire. It’s Marla who is the real hero of Fight Club. She is the living center of the universe Tyler and all the rest revolve around. Marla, the Patron Saint of Lost Girls, is the firm link to humanity in a story about men who wish to transcend theirs through violence.

Now bring the woman some chocolate chiffon pie, clean food only. She’s earned it. In fact, all of us surviving Marlas have, too.

Review: ‘Babylon’ is a Creative, Bold, and Slightly Whitewashed View of Old Hollywood