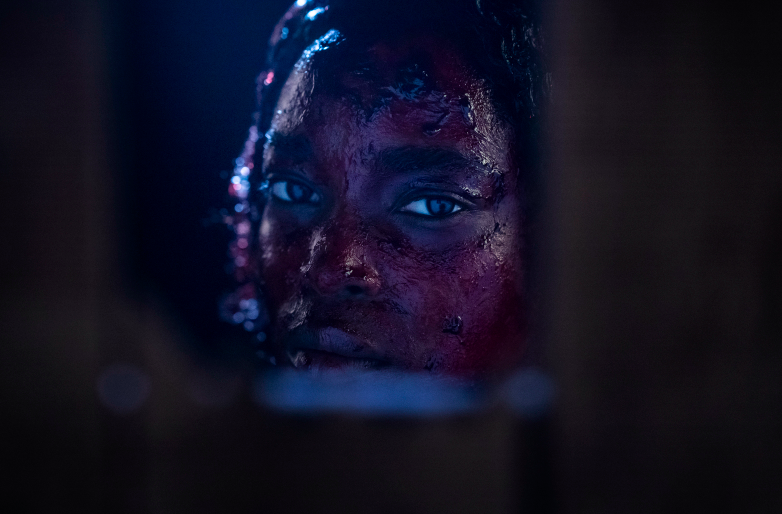 If you walked away from the latest installment of Lovecraft Country Sunday night muttering “What in the name of Jessica Krug did I just watch?”, you are not alone. That’s because in an age where cultural appropriation is all the rage, it was fascinating and disturbing to see Ruby (Wunmi Mosaku), a proud and outspoken Black woman from the South Side of Chicago, metamorphose into a white woman in the fifth episode titled “Strange Case.”

And not just any white woman, but the same racist white woman named Dell (Jamie Neumann) who had harassed and insulted Uncle George (Courtney B. Vance) and ‘nem in Ardham. You know, the one Leti (Jurnee Smollett) killed? There is a delicious amount of karma that this is the white woman’s “skin” Ruby got to use to discover just how great the currency of white privilege is. Too bad Ruby doesn’t know Dell’s backstory. The fact that Ntozake Shange’s For Colored Girls Who Have Considered Suicide/When The Rainbow Is Enuf served as the backing track for Ruby’s white liberation, only adds to the experience. As we all know, our assimilation makes us more acceptable as Black women. While we don’t have William’s (Jordan Patrick Smith) magical potion to temporarily turn us into white women, we understand the metaphor for bleaching creams and hair weaves all too well.

Metamorphosis was a recurring theme throughout the episode. There was Ruby’s Kafkaesque switch – which allowed her, among other things, to hear how white people disparage Black people when we’re not around. But we also saw Atticus (Jonathan Majors) morph into a younger and stronger version of his perpetually enraged father Montrose (Michael Kenneth Williams). That’s because Tic nearly murdered his father when he pummeled him for killing Yahima (Monique Candelaria) and burning Titus’ lost pages.

Mr. Hughes (David Stanbra), the boss from Marshall Fields, also changed from an affable guy to a racist attempted rapist when he got Tamara (Sibongile Mlambo) alone. Meanwhile, Sammy (Jon Hudson Odom) and his friends became beautiful drag queens within the sanctity of Sammy’s home and later at a presumably clandestine nightclub. The story takes place in 1950s Chicago, after all. It’s at this same nightclub that Montrose finally embraces his sexuality as a gay Black man who has been closeted for far too long. There were also a lot of references to Kenyan locusts and butterflies.

But no metamorphosis can trump that of Christina (Abbey Lee), who by episode’s end, confirmed Twitter suspicions that she and William are one in the same. Turns out, she’s been getting high on her own supply and sipping that potion. It was clear that Christina hated how sexist society can be but taking a potion to become a man is a whole other thing. The only difference between her gender-bending act and that of Sammy and his friends, is magic.

As for the rules of said magic, one internet theory is that in order to shapeshift into someone else’s likeness, that person has to be dead. This especially makes sense because Christina mentioned that Captain Lancaster (Mac Brandt) had stolen the lodge away from William, which means Lancaster likely killed William. That’s why Christina wanted Ruby to plant evidence in Lancaster’s office.

Speaking of Lancaster’s office, did anyone notice when Lancaster took off his shirt, that he has a Black man’s torso? Yikes. Looks like old Hiram’s (Mile Doleac) inhumane experiments on innocent Black people benefitted Lancaster more than we previously realized. William/Christina even mentioned Hiram as the creator of her potion. Fascinating.

And what’s with the zombie dude in Lancaster’s closet? Lancaster and his cronies mentioned something about the man stealing money when he was alive. But how can he tell them where the money is if he has no tongue? His neck also appeared to have brown pigmentation, which means he too might be some kind of Frankenstein monster made up of innocent Black people’s body parts.

While Christina plots her revenge against Lancaster, Ruby exacts her vengeance against Hughes when she sodomized him with her stilettos. She also wanted Hughes to know she wasn’t a white woman named Hillary but a Black woman named Ruby in disguise. So, she raped him while the white skin of Hillary, that Hughes loved so much, fell away. Wow. It wouldn’t be at all surprising if Hughes ends up in an insane asylum.

On one hand, it seemed as though Ruby despised Tamara for taking the job she wanted and for being underqualified, undereducated and not ambitious enough. But later, when she saw Hughes try to rape Tamara, Ruby realized a few things. One, had she gotten the job before Tamara, she would’ve suffered the same setbacks and attacks. And two, Hughes likely hired Tamara because he’s a sexual predator who waited for the chance to get Tamara alone and pounce. Thankfully, Tamara was a lot tougher than she appeared to be.

With so much going on with Ruby and William and Christina and even Montrose, Leti and Tic took a backseat to the main story for the first time all season. That said, we did get to see the young lovers hook up again – that’s some acting – and we learned that Leti proactively took photos of Titus’ pages before Montrose could destroy them. Whether or not Leti is right about the pages being evil, remains to be seen. Though given the way Tic reacted when he translated the words “die” and “suffer,” compelling him to call and confront Ji-Ah (Jamie Chung) in South Korea, maybe the pages are a source of wickedness. Hmm. Looks like we’ll learn who Ji-Ah really is when the show does a flashback episode next week, which takes place during Tic’s military service in the Korean war.