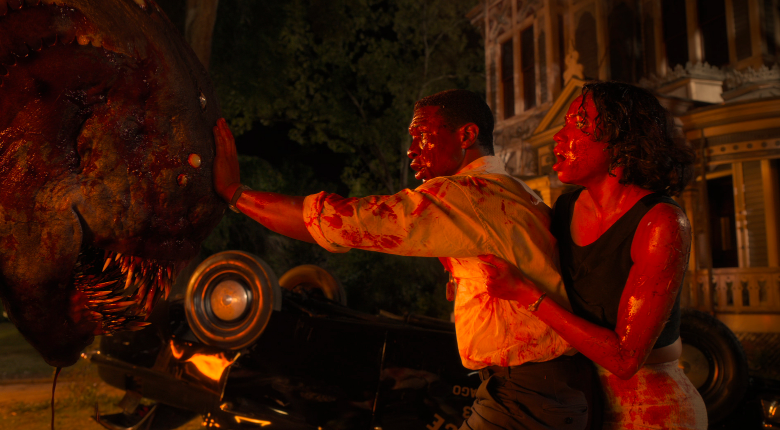 Fears come in many shapes, fashions, and forms and Sunday night’s episode of Lovecraft Country explored a variety of fears Black people experience in particular. Titled “Jig-A-Bobo,” the eighth installment opened with a recreation of Emmett Till’s historic and tragic funeral.

People are spilling into the streets and the cops, in an effort to control the crowd, threaten to shut down the processional. Diana (Jada Harris) is crying silent tears not only for her friend (Rhyan Hill), who got lynched by racist white men down south, but for her mother Hippolyta (Aunjanue Ellis) who still hasn’t returned home. The adults are speaking in generalities about 14-year-old Emmett aka Bobo but Diana really knew and loved him and she can smell his decomposition in the hot summer air. She’s also annoyed because no one has told her the truth about Hippolyta’s whereabouts.

Speaking of which, when Tic (Jonathan Majors) and Leti (Jurnee Smollett) start arguing about whether or not to tell Diana the truth, she sneaks away from them, causing all of the adults including Ruby (Wunmi Mosaku) and Montrose (Michael Kenneth Williams), to panic and search for her. Bananarama’s “Cruel Summer” plays just before the title card drops and the first fear is revealed – Black parents’ fear that their children will be killed at the hands of racist whites just as Emmett Till was August 28, 1955. Cruel summer, indeed.

After the title card drops, Diana is shown staring inside a penny arcade where she and Bobo more than likely hung out. Depressed, she walks away and not long after, a couple of Black girls her age come out laughing and having a good time. One girl even waves hello. But Diana isn’t having it and picks up a few rocks and throws them at the girls until they run away. Pleased with her delinquency and her ability to shut down joy on the day of her bestie’s funeral, Diana laughs maniacally and saunters off. But the glee proves short-lived when Lancaster (Mac Brandt) and one of his cronies roll up on Diana and start asking her about Hippolyta. Determined to silence Diana so she doesn’t tell anyone he questioned her, Lancaster rubs spit on Diana’s forehead and puts a curse on her, giving life to Diana’s deepest fears. The cops leave her and what’s even creepier, is that the billboard eyes of the Cream of Wheat man aka Frank L. White, follow Diana as she runs away with a slimy forehead. More on that later but a second fear is revealed – Black people’s very rational fear of the police.

Leti goes home hoping to find Diana there and instead, comes face to face with Ji-Ah (Jamie Chung), who is looking for Tic. But Atticus isn’t there and he’s not really looking for Diana either. He’s meeting up with sneaky Christina (Abbey Lee) at the cemetery in the Braithwhite family tomb. After some back and forth and Christina throwing out a few hateful comments, proving that she’s still pissed that Tic has a leg up on her in the family tree because he’s a man, Tic gives Christina the key to Hiram’s orrery in exchange for a protection spell. Christina reminds Tic that incantations are more than words. You have to have intent and energy she says before teaching Tic a symbol he must draw using chalk or blood. She says she’s going to achieve immortality even though Titus and no one else in the Braithwhite family did and they part ways.

Back to Diana. She goes home and Montrose is there waiting to yell at her for wandering off. Montrose asks Diana where she’s been and she angrily responds that she doesn’t have to tell him anything because Montrose isn’t her father and her father is dead. Whoa. Diana then asks if Hippolyta is dead too and Montrose says her mom is on a guide trip. Diana tells her uncle to “stop f**king lying” and she runs inside the bathroom and slams the door. Diana washes and forehead and cries. When Montrose says white people murdered his best friend too, Diana turns on the radio to drown out his voice. As Diana tries to ignore him, she notices that the Topsy character on the cover of her Uncle Tom’s Cabin book has turned menacing and she freaks out and escapes out the bathroom window. Hmm. Sadly, Lancaster’s curse has taken effect and no amount of forehead washing can change that. Montrose opens the bathroom door and sees that Diana is gone once again. And when he looks at the book, Topsy looks normal.

There are two more fearful scenes involving other characters before Diana’s horrifying and very discussion worthy phobia takes over. So, let’s jump in and out of those really quickly before getting all deep with Ms. Diana. First up is Ruby. Heartbroken by Emmett’s murder, she goes to Christina/William’s house and tries to use her key to open the gate. A white man working as a lawn person across the street, sees Ruby and asks if she’s the maid. Ruby curses him out and says she isn’t. Before the confrontation escalates, William (Jordan Patrick Smith) drives up and intervenes. The white man says he was just making sure Ruby wasn’t doing something criminal because the funeral on the other side of town has Black people doing crazy things. Really dude? William thanks the man for his concern and takes a crying Ruby inside. He seductively undresses Ruby and runs a hot bath for her.

Ruby and William kiss and make sex eyes at each other. But before things go further, Ruby drinks her shapeshifting potion so she can turn into Hillary and then they get down and lusty Striking Vipers style. But William gives the business to Ruby so intensely that her white lady skin falls off, blood and all. Chalk this off as the nastiest, most graphic love scene ever. Then again, Ji-Ah had some pretty bloody copulation scenes. Let’s just call it a tie. Afterward, however, things get emotionally messy when Ruby confronts Christina and says she wants the obviously detached white woman to feel the pain she feels for Emmett’s murder. And if nothing else, Ruby reasons, she wants Christina to feel guilt for being white, safe and privileged. But Christina refuses to feel guilt or even sadness, she says. Christina even takes the time to name Emmett’s murderers only to say she doesn’t care that the men won’t be legally punished as they should. Later, toward the end of the episode, when Christina pays two goons to beat and kill her the same way Emmett was murdered, one has to wonder if her immortality was bolstered by the loss of his Black life. Just a theory.

What’s worse is that Christina says Ruby isn’t mourning but pretending to because magic has reinvented her. Is Christina right or is this relationship over? We’ll see. But there is another realistic fear playing out between Ruby and Christina – the fear that our white “friends” will never truly understand the crippling pain of racism the way we do. Another theory is that Christina hired those men to brutally beat and kill her so that she could feel the crippling pain of racism. Maybe both theories are true. Shrug.

Speaking of fear-inducing relationships, Tic is trying to salvage his with Leti when Ji-Ah shows up and takes her shoes off. Ji-Ah reiterates that Tic is going to die and uses words like “climax.” She also mentions the 100 dudes she had to sleep with and that she is a kumiho who had to kill except Tic didn’t die. When he asks Ji-Ah why she’s there, Leti says it before Ji-Ah can – because Ji-Ah still loves Tic. But after Leti runs off, Tic tells Ji-Ah their “s*it wasn’t real,” he’s not dying and she has to leave. Ugh, can you imagine an old Boo showing up to “talk” to your new Boo? Anyway, Leti packs a bag and kicks Tic out only to ask where he’s going in the soapiest way possible. Leti?! Tic says he’s going to cast a protection spell on himself to protect their future. Later, when Tic meets up with Montrose, he says he knows Leti is pregnant because he traveled to the future. But when he went through the portal, a mystery woman sporting a hood and a robotic arm handed him the book and pushed him back through the portal.

Which leads us to Diana, who is, as we figure out by episode’s end, the mystery robotic-armed woman in the future. But how does Diana lose her arm? Well, Topsy (professional dancer Kaelynn Gobert-Harris) and her menacing twin Bopsy (professional dancer Bianca Brewton) started stalking her with the intent to hurt or possibly kill her. And after dodging them from the L-train platform to the alley across from the police station, they finally catch up with her at her parent’s garage because Montrose holds her as they destroy her left arm. Oh Montrose. Reading spells as a dyslexic and holding Diana so that the pickaninnies (or should we say jigaboos?) can get her. Barf! It feels wrong even typing those words much less saying them.

Diana’s best escape, of course, comes after she curses out and spits on Lancaster and rides away on her bike while a recording of Naomi Wadler’s 2018 March for Our Lives speech serves as her soundtrack. Topsy and Bopsy tried to get her then too but couldn’t. But we can’t run from our demons forever especially when a white cop curses you. Take away the “curse,” and the image of Harriet Beecher Stowe’s racist depiction of Topsy, haunts and frightens all Black children. Yes, Topsy and Bopsy with their sharp and deadly nails, yellow eyes and menacing smiles were truly Us level scary. That dreadful minstrel song they bopped to, “Stop Dat Knocking,” only made them more frightful.

But Lancaster put a curse on Diana to keep her quiet and didn’t even know himself what would be chasing Diana. Which means Topsy and Bopsy are her worst fear, kinda like It, because they represent the antithesis of the intelligence and adaptability that Diana and millions of beautiful Black girls possess. Black girls are neither stereotypes nor criminals when we show our joy. We are doctors and lawyers and mothers and fighters and we loathe being reduced to caricature. Despite our accomplishments, we are often sexualized, dehuminized and undervalued as Topsy, Sapphire, Mammy and all the others just as we fear. And all of them are, like Langston Hughes said, “amusing undoubtedly to the white child, but like an unkind word to one who has known too many hurts to enjoy the additional pain of being laughed at.”

Meanwhile, Lancaster is dead, Leti’s lawn is littered with slaughtered white cops and Tic has a shoggoth as a pet. Guess that spell worked after all. More than anything, we want Diana to be OK and she can’t be OK without Hippolyta. Sigh.