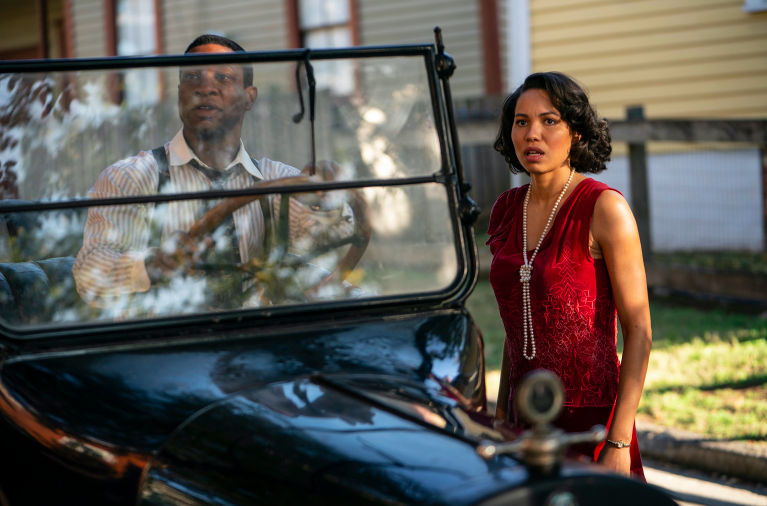 Parental sacrifice shaped episode nine of Lovecraft Country Sunday night and gave deeper insight into Montrose (Michael Kenneth Williams) and why he is the way he is. Titled “Rewind 1921,” the installment not only explored what Montrose had to give up over the years but the sacrifices of Hippolyta (Aunjanue Ellis) and mom-to-be Leti (Jurnee Smollett).

The episode, the penultimate to the season-one finale, opens with Diana’s (Jada Harris) arm rotting away. Tic (Jonathan Majors) and Leti are blaming each other and Ruby (Wunmi Mosaku) urges them both to stop pointing fingers so they can actually help poor Diana. Tic says they need to call Christina (Abbey Lee) but Montrose thinks this is a bad idea. But Tic argues if they give Christina Titus’ pages, she’ll help. The only problem is Leti already did that for an invulnerability shield. And when Montrose hears this, he goes ballistic. Ruby and Tic push Montrose back so he doesn’t get in Leti’s face and Ruby nearly tells everyone that Leti is pregnant. Leti stops her but little do these two sisters know, Tic and Montrose know already. Ruby says Christina will help Diana for her and everyone gives Ruby the stank eye.

Christina saunters in and says she can reverse the curse on Dee if Tic willingly goes back with her to Ardham during the autumnal equinox. (Murder plot!) Tic agrees and then before Christina leaves, she gives instructions on what she will need to reverse the curse on Diana. She also says that in order to save Diana completely – the reversal lasts 24 hours – they will need the Book of Names. One of the things Christina will need for the curse reversal is the blood of Dee’s closest relative. Without Hippolyta, that leaves Montrose and he solemnly agrees only to tell Tic later that he may or may not be his biological father.

When Tic hears the news, he curses out a slightly inebriated Montrose for all the beatings he gave him as a child and all the times he wished Uncle George (Courtney B. Vance) was his dad. Now he’s furious because maybe George was. An embarrassed Leti walks in on the dispute and wishes she hadn’t. She tells them that Christina is back and Diana’s fever has broken. While away, Christina pays one last visit to a dying Lancaster (Mac Brandt) who, despite having the body parts of yet another innocent Black man, can’t rejuvenate because Christina had Ruby put that rock in his desk drawer. So that’s what that rock was for. Disguised as William (Jordan Patrick Smith), Christina morbidly and happily watches Lancaster die for good.

But the clock is ticking and Diana needs help. Just before Tic, Leti and Montrose depart to help Diana, in walks a concerned and tardy Hippolyta, questioning what is wrong with her baby. Oh, Hippolyta! Christina cuts Hippolyta’s hand and says a Sons of Adam incantation over Diana, who has turned into a Topsy (Kaelynn Gobert-Harris) and Bopsy (Bianca Brewton) clone. Diana writhes until a gang of maggots crawl out of her arm – Yikes! – and she is temporarily cured. Christina and Ruby go to leave and Leti warns her sister about Christina’s shady ways. Ruby fires back that Montrose is crazy and Leti better protect herself too. Before Ruby leaves, Leti says that Christina is trying to kill Tic and Ruby leaves with Christina anyway. Later, when Christina admits that she will have to kill Tic, Ruby makes her promise that she won’t hurt Leti in the process. Wow, Ruby! Really?

Meanwhile, Hippolyta is all about time travel. She says the only way to save Diana is to travel back to Tulsa in 1921 and get the Book of Names before it burns in the house with Dora’s (Erica Tazel) family. As she’s saying what she must do and where she must go, Montrose starts mansplaining and saying Hippolyta sounds insane. But Hippolyta didn’t spend the equivalent of 200 years in an alternative universe to have Montrose sanity shame her. Hippolyta says she’s going to use all of her newly acquired knowledge and skills to save her daughter’s life. “Now get in the f**king car.”

All five hit the road and head to the observatory in Kentucky, which is six hours away. There’s just one problem, in episode seven, the observatory was located in Kansas. Oops! When questioned about the discrepancy on Twitter, the show’s creator Misha Green apologized for the gaffe. Anyway, back at the observatory – wherever it’s located – a haunted Montrose gets drunk and shames Leti for making a deal with Christina. He also tells Leti that Tic knows she’s pregnant. But Tic didn’t say anything because he’s trying to prevent Christina from killing him during the autumnal equinox the way it’s written in their son’s book in the future. An overwhelmed Leti is touched that she’s having a boy.

It’s showtime and Hippolyta is going to use herself as a motherboard to help open the portal because she has special chips implanted in her wrists. Montrose starts getting sentimental about a black and white photo of a youthful him (Gerard Mikell), his father Verton (William Catlett) and a young George (Christian Gabriel Anderson). But an unimpressed Tic snatches the photo from Montrose’s hand and using the photo, Hippolyta sets the machine to the correct universe and location. Hippolyta hooks herself up to the machine and when the portal opens, Tic and Leti jump in. Montrose is more reticent but eventually makes the leap after Hippolyta yells at him. Back in 1921, Montrose is paralyzed with sadness but Tic listens to two girls in the hallway of the Stradford Hotel complain about a dance being canceled.

Tic tells Montrose what the girls said and Montrose remembers that the girls are referring to the Booker T. Washington High School prom being canceled. He says officials closed the school hours before the massacre. Once the coast is clear, Tic, Leti and Montrose steal some clothes off a rack in the hallway and head to a young Dora’s (Leeann Ross) house to get the Book of Names. But when they get there, they see Montrose’s dad whipping him with a whole tree branch for trying on George’s prom jacket and dancing around effeminately. A PTSD riddled Montrose cries and says he deserved the beating but Leti says no one does. And Tic seems to finally understand that Montrose’s abuse was learned.

Dora, George and Montrose’s neighbor, runs out to defend Montrose against his inebriated dad and he lashes out at Dora and threatens to beat her too. When Dora’s dad Gilbert (Keith Arthur Bolden) comes out to defend Dora, Montrose runs away to safety. The dad goes in the house and George comes out to take Dora to the prom. Before they can leave, the couple learns that the prom has been canceled. The older Montrose dips out as Leti and Tic watch a young Dora and George and when they discover he’s missing, they deduce that Montrose is probably trying to warn Uncle George about getting shot in Ardham.

Leti hotwires a car for Tic and he catches up with Montrose who is actually watching his younger self break up with his crush Thomas (Khamary Rose). Back in 1921 apparently, Montrose denied his homosexuality and lashed out at Thomas by saying they couldn’t be friends and calling him a “faggot.” Turns out the slur has been around since 1914. The senior Montrose wants to intervene and prevent an approaching white mob from killing Thomas, but Tic pleads with him not to because he could mess up the future and prevent Tic’s birth and that of Tic’s unborn son. “Thomas won’t mean much,” Montrose tells Tic, to let him know he won’t alter the past. “He’s just the first in a long list of sacrifices I made to be your father.” Poor Montrose. When Montrose says the only thing he wanted to be was Tic’s father, you couldn’t help but to cry right along with Tic.

Back at Dora’s house, Leti is inside after Verton and Gilbert saved her from two gun-wielding racists. Upon entering, Nana Hattie (the incomparable Regina Taylor) looks down at Leti’s 1950s footwear and is immediately suspicious. And later, when Hattie catches Leti rifling through her things, she points out her shoes as the giveaway that something was amiss. Black women don’t miss much, huh? So Leti comes clean and explains that she’s there for the Book of Names. Hattie must be Hannah’s daughter but she doesn’t give up the book easily and Leti has to draw birthmark examples, drop family names, confess her love for Tic and beg and cry before Hattie finally hands over the goods.

Hattie says Leti’s baby George will be her “faith turned to flesh.” Despite this powerful message, Leti can’t save Hattie or any of Dora’s relatives. And as Leti prays with Hattie and watches her burn to death, herself unscathed because of Christina’s invulnerability spell, Sonia Sanchez’s spoken word masterpiece “Catch the Fire” serves as the heart-wrenching soundtrack. Lovecraft Country composer Laura Karpman turned the poem into a haunting opera song for the closing credits with soprano Janai Brugger doing the honors.

At the park, Montrose and Tic watch as the racist mob shoots and kills Thomas just before George and Dora arrive to save a young Montrose. But the trio is outnumbered and Tic, who is of course the mysterious stranger, gets a bat and saves the day. So, Montrose’s parental sacrifices weren’t in vain. By having Tic as his son, Tic saved his young life and that of George and Dora too. He also showed Montrose love and protection when he needed it most by saying four unforgettable words to Montrose in particular: “I got you, kid.”

But nothing can eclipse the murder, destruction and theft of the bloodthirsty white racist mobs who destroyed Tulsa’s Black Wall Street. While the fires ravished stately homes, businesses and generational wealth, Tic and Leti eventually made their way back home. Montrose returned home too but not before paying homage to real-life victims and heroes Dr. A.C. Jackson, Peg Leg Taylor, H.L. Byars Tailor Shop and the Phelps, a white couple that hid and cared for Black Tulsans in their basement.

By episode’s end, Hippolyta sacrifices her body, sanity and hair – it turns blue – all in order to get Montrose, Tic and Leti’s slow walking behind back to 1955 to save Diana. Motherly love indeed. How is this first season going to end next week and will Tic die? The anticipation is far too great.