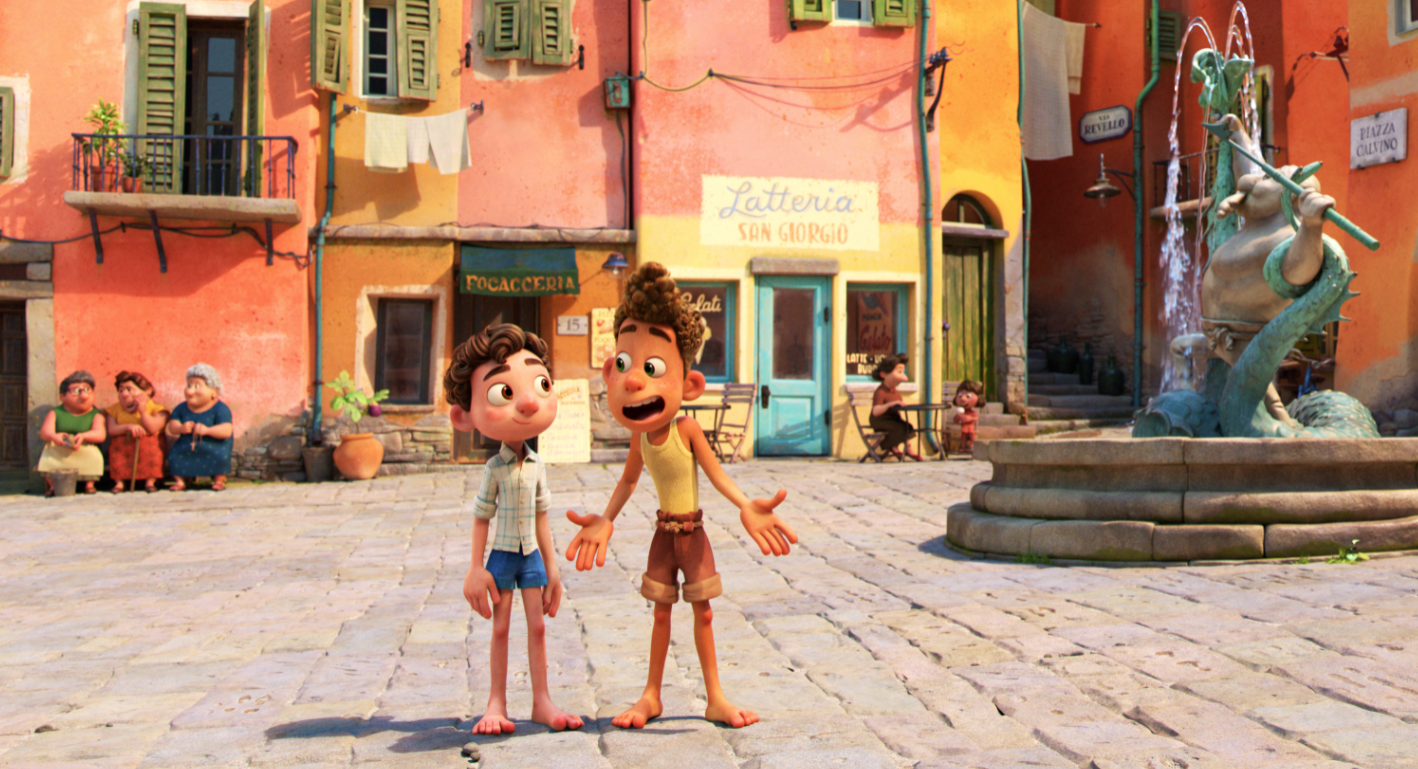 Pixar has taken us to some fantastic places. We have been to space with Wall-E, the Great Barrier Reef with Nemo, Scotland with Merida, France with Remy, Mexico with Miguel, New York with Joe, and even the mind of a teenage girl with Joy. Now, Pixar takes us to Italy with Luca.

Luca is set in a beautifully vibrant seaside town on the Italian Riviera. The animated feature is a coming-of-age story about a young boy experiencing the summer of a lifetime with gelato, pasta, Vespas, and his newfound best friend, Alberto. The film is directed by Enrico Casarosa (La Luna) and stars Jacob Tremblay (Room), Jack Dylan Grazer (It, 2017), Maya Rudolph (Bridesmaids), Giacomo Gianniotti (Grey’s Anatomy), Jim Gaffigan (Troop Zero), and Emma Berman.

Based on the 30 minutes of footage and a cool media presentation we were able to see, Luca is gearing up to introduce audiences to life in the Italian Riviera. Taking cues from director Casarosa’s personal experiences, Luca is an Italian cultural experience. Moments from the footage that stood out the most include a wild and farfetched love of Vespas, the introduction to Sea Monsters, and the fictional town of Porto Rosso.

Who doesn’t love a good scooter ride? Vespas are in every way Italian culture. An icon, synonymous with freedom. Luca and Alberto are all about the Vespas. Director Casarosa gave some insight into his connection with Vespas.

“It just felt like such a great symbol of freedom in this silliness. I do like that it’s kind of preposterous in some way ’cause kids come up with these wild ideas, you know. And so, the idea that we can ride into the sunset and live on a Vespa, it’s perfectly great. And so, I always loved that side of it, that it’s a bit silly. But that is kind of the connection that I had. That we certainly always loved it. They’re beautiful machines.”

Vespas are prominent in Luca’s experience on land. For him, they represent so many new possibilities.

While Pixar has introduced us to monsters on land, Luca will be our first experience with sea monsters. Don’t know about you, but sea monsters learning Italian is a fantastic idea. When asked about the act of making these sea creatures less scary and more colorful, Casarosa explained:

“I guess it’s just not my sensibility, to be honest, to go to something truly, truly scary. Or draw something slimy. I think it’s a bit of a preference, and I thought that it could still be fantastical, but appealing. I was thinking a little more about their characteristics. I love the idea of that, for example, Luca’s all eyes because he’s curious. There’s definitely one scary sea monster, but that one, which you might’ve seen in the 30 minutes with Uncle Ugo, the one that we wanted to make as scary as possible to make it as dreadful as possible for Luca to have to go with him.”

Producer Andrea Warren shared that sea monsters are also part of the bigger themes of the film. The themes will speak to kids and adults now more than ever.

“Both sides kind of refer to the other as ‘monsters.’ The humans say they’re sea monsters, and the sea creatures say, you know, they’re land monsters. I think that is a part of the theme of the film. They really aren’t monsters. Neither one of them are. And if they get to know each other more and appreciate each other for what they are and what they can learn from each other, they’ll discover they aren’t monsters. So, I think that was also part of them not looking like monsters. Ultimately, we didn’t want that to be true of either side.”

Inspiration for the mythical creatures came from many different sources. Many cultures have folktales or lore that speak to reasons why things are the way they are, and for the sea monsters in Luca, it’s no different. Casarosa explains his fascination with the legend of an octopus, dragons, and a Kraken.

“There is a wonderful town that is right next to La Spezia that has a legend of a helpful octopus that rang the bell when the pirates were coming. I always found it fascinating, but you visit the place and the bell and the church is right on the sea. So, you can see why people would think an octopus can definitely walk out and ring the bell.

“Other places had dragons. There’s a big history of sea dragons. For example, one is San Fruttuoso, which is a famous abbey, a beautiful place that we definitely took a lot of reference from. That one was known as, ‘Don’t go there. There’s a dragon that lives there.’ And that is, actually, the one that we totally thought, they must’ve had great fishing here and that is a bit of what we found. The maps and the wonderful Krakens and leviathans, and the mystery of those things were always very fascinating to me.”

Of course, the main attraction of the film is the town of Porto Rosso with its fishing culture, pasta, gelato, and Vespa races. The town is fictional but inspired by so many wonderful, vibrant Italian cities. The goal for Casarosa was to make his town by summing up the Cinque Terre. He explains that it isn’t one place, but the feel of many places that make Porto Rosso so special.

“We mix and match a little bit to make something that feels of the place but isn’t one specific town. We wanted to have the essence of it all, of the place, while creating our town with its own geography. But we took a ton of fun design cues from a lot of different towns. Portofino is close by, too, which is a town that’s quite well known, slightly more fanciful. I always think of Cinque Terre as more of a blue-collar side of it. That was a big inspiration. Camogli is another town that I absolutely love. They used to be ship makers, so we visited Camogli, too. My grandma lived right next door, so we were in that town a lot. They have the best focaccia al formaggio in Italy.”

While there are many more Italian cultural references in Luca, it’s the inspiration and vision of summer in the Italian Riviera with Vespas and your best friend taking on adventures and trying new things. Can’t wait to see the film in its entirety. Luca premieres on June 18, 2021, on Disney+.