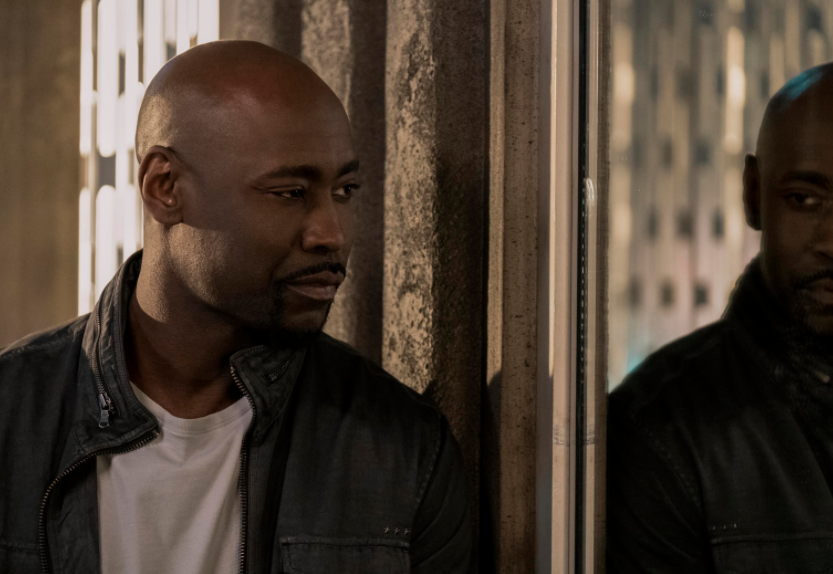 D.B. Woodside. You have seen him through the years in many different roles: from 24 and Buffy the Vampire Slayer, to The Temptations and Parenthood, to Suits and currently playing Amenadiel on the hit show Lucifer. Woodside has been part of the entertainment biz for over 20 years. I’m talking throwbacks like Romeo Must Die (2000) and Hellcats (you know you watched that series on the CW about competitive college cheerleading).

Well, here’s one more reason to love him. Besides playing in some of your favorite shows and movies, D.B. is in fact a total nerd. BGN recently got a chance to chat with the talented star about everything from comic books, Star Wars, the Zack Snyder cut of Justice League (2021), and of course his role as Amenadiel. While you wait for Lucifer to return on May 28, check out the conversation below.

Thank you for taking the time to be here and talking with us here at Black Girl Nerds.

I figured you were a nerd — I was reading your tweets the other day about the Zack Snyder cut.

So have you read any of the comics? Is that where you started your nerdiness?

Yeah. My dad’s from South Florida. He passed a few years ago, but as a kid every summer we would drive down because we were broke Black people — we couldn’t afford to fly. We would drive all the way down from New York to Florida. We would stay with my favorite aunt and her son, my cousin George, who was older. I was this quiet kid, very introverted. I liked Aunt Martha’s house because it was pretty big. I could disappear into like nooks and crannies. George had this huge collection of comic books that he kept in the garage. That’s how I introduced myself to comic books. I started with Black Panther, then very quickly went to Luke Cage, and then Luke Cage and Iron Fist. Then I started going into Iron Man, Spider-Man, Daredevil. I love Daredevil.

We’re going to get part two of Season 5 soon for Lucifer. Have you had a chance to dive into the Lucifer comic books at all? I know your character isn’t really part of it.

I haven’t. Once I found out that Amenadiel wasn’t really part of it, I didn’t want to dive in because they were going to create their own mythology. Now that’s something I’ll definitely do as soon as Lucifer wraps. I didn’t want that to get inside my head, especially since he’s not in there. I’ve seen images of him when he is in there, and we’re very different. So I wanted to take a look at it afterward, but I definitely will be reading them.

I heard that you’ve been directing. How has that been? Have you always had that career goal in mind?

Always. I was never one that just wanted to act. I don’t mean this in some kind of presumptuous way, but I’m an artist. So as an artist, I have a vision of everything. When I was younger, I would not only write and direct plays, but I would throw myself in them and throw my friends in them. That developed further when I got to college, and I started doing it at that level. Then in grad school, I started doing it at that level. Then when I got into the Yale School of drama, I was doing it at that level. So this is something that I’ve always wanted to do. Then I came out here and I was writing a lot. But it just seemed that it was just a lot harder to do. Quite honestly, it seemed that my reps wanted me to focus on just acting because they felt like that was the thing that happened the fastest. I was young, so I kind of went along with that.

We all have some regrets. I wish I had continued doing everything that I wanted to do when I was young. But I’m happy that I’m doing them now. So I’ve been directing shorts. I started about 20 years ago. I had a short that did the festival circuit. That was a lot of fun. I just never lost sight of that. This is what I wanted to do. It was a little of an uphill battle to get people over here to see me in that light. I’ve said before, I think executives are successful because they’re pragmatic people. They’re not necessarily people that embrace faith. They need to see something. People have known me as an actor for the last 20 years. So that’s what they see. Seeing something that they don’t, I think, is somewhat challenging for them. But I think they finally opened up, and I had some really great people in my corner. Now I’m directing and I think people are able to see that I definitely have a visual style. I’m excited to move on and go to different places as well.

Do you think the COVID protocols and necessary precautions helped or hindered you in this breakout moment of directing?

I think it did a little bit of both. I’ll be honest, I think as a result of being in COVID, a lot of things happened nationally, and a lot more attention was focused on things that have been going on forever because we were all locked down. The George Floyd situation certainly took on a life of its own that we’ve been living since we’ve been born. I think other people saw it on the news, and they were forced to pay attention to it. As a result, I think it had a ripple effect in many businesses very fast. I think that helped in my situation. I think it allowed certain people to take a chance and to possibly embrace faith a little bit more than they’re used to.

I definitely had some champions in my corner. KristieAnne Reed over at Bruckheimer and Nathan Hope, a director here for Lucifer as well as our producing director the first season — I felt those two in my corner for a very long time. So I just think certain situations helped. Now, since I’ve been able to show people what I’m able to do during COVID, during a time when we had heavy restrictions, during a time where we went from having twelve to thirteen hours to work to more like having seven and a half, I was still able to turn out the type of quality that I feel very comfortable and confident about in Episode 8, Season 6. I think now people are going to be a lot more open to letting me do a lot more.

Is there a show that you would love to guest direct on?

Oh, my goodness. Yeah. I would love to guest direct on The Mandalorian. I came up with Jon Favreau. I haven’t seen him in over a decade. It would be great to run into him again. Anything that Disney+ does, with a lot of the Marvel stuff, would be absolutely fantastic. I’d also love to do things over at Netflix, like hard-hitting dramas like Ozark. Stuff like that would be incredible to do. Anywhere that is really open to having a director come in and really allow them to pursue a vision that of course falls into the world of whatever show that is. Disney+, Netflix, Amazon, any of these streaming services would be great.