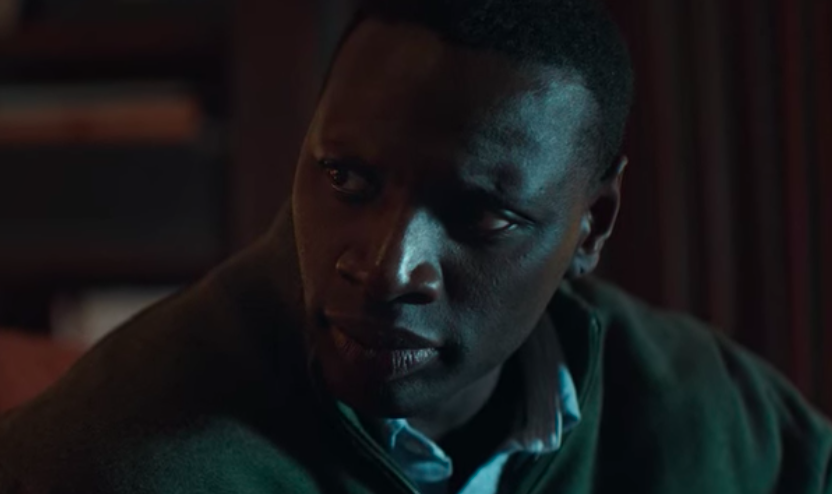 A droid buzzes through Mr. Pellegrini’s home as he is sleeping. It records everything but sets off an alarm. Bodyguards/security does its best to take it out, then gives the droid to Mr. Pellegrini. He finds a note that says “I’ll get you.”

Outside, Assane is on top of the roof. During breakfast, Dumont is surprised by Assane joining him, with a new Circe for him. Assane asks Dumont what he was planning to tell Pellegrini but Dumont doesn’t budge. So, Assane brings up Dumont’s wife, who isn’t at work. Dumont brings up a journalist, Fabienne Bériot (Anne Benoît), who almost took out Pellegrini years before. Once Assane leaves the café, Dumont calls to check on his wife but is relieved to find out that she’s at work. Ah, trickster got him on the edge of his seat.

Assane searches Fabienne online, finds a book she wrote on Pellegrini and his corruption. Fabienne arrives to her clustered home to find Assane casually waiting for her with her book in hand. She denies that she was ever the author and that she couldn’t fight against Pellegrini and his lawyers. The dog barks whenever the name Pellegrini is said. Assane tries to persuade her to help him by telling her what happened to his father. She insists that she is too old and tired to help, then tells him to leave. Dumont listens to the inspector’s and detective’s theory on the connection of the necklace thief and his kidnapping. He receives a text from Mr. Pellegrini about discussing Babakar.

When Assane arrives home, he is surprised by Fabienne’s dog outside the front door and Fabienne in the car. She agrees to help him but first she must know his name, a level of trust must be built. The two discuss matters in Assane’s home. They must find something big that Pellegrini can’t cover up to showcase his corruption. The cops are doing their best to come with a sketch of Assane but struggle. Later, Fabienne and Assane sit outside the Objector’s office that holds a green recording that is of Pellegrini in a meeting that he attended in ’96. Assane walks into the office, with Fabienne’s glasses and files in hand, while Fabienne makes a call describing him as an informant that needs to go up to an office. As Assane makes his way down, the security guard finds out that the woman he was to meet is out sick. The two security guards try to catch him, but Assane is able to leave quickly with Fabienne.

The two partners sit down to watch this recording that has to do with attacks in Kuala Lumpur that resulted in 11 murders. A middleman tricked the Malaysians while selling weapons and they retaliated by blowing up the French embassy. The recording shows Pellegrini forcing their hands into paying double the amount on weapons that resulted in some French people being killed. Assane states he will post it on Twitter; however, Fabienne doesn’t reveal how she got the tape.

The next day Juliette and Mr. Pellegrini stop a meeting when the others are alerted by a tweet. Juliette shows him the tweet, which he brushes aside and promises to his daughter that it means nothing. Assane visits Raoul at their home. Raoul lets loose that Claire is dating a doctor with money and that Assane should stop acting like he doesn’t care. Later, Benjamin and Assane watch as Mr. Pellegrini holds a press conference with Fabienne hiding as one of the reporters. When Fabienne asks a question, she gets the attention of a man who decides to follow her and makes her nervous. Pellegrini taunts the Twitter handler, Salvatore, to prove it. Fabienne and Assane discuss the next portion of their plan: Salvatore is to make his appearance.

Dumont is unimpressed with the sketches given, threatens to throw the team off the necklace case, and denies the last exact sketch of the kidnapper. Youssef is taken off the necklace case, unfortunately. The team thinks that something is up but aren’t going to inspect the commissioner for now. Fabienne is surprised that Assane is able to handle makeup brushes to obscure his appearance. Assane is donning a matured face for the interview, the perfect disguise. Fabienne watches from home. The tape in question that is shown is not the one of Pellegrini being a traitor. The interviewer was paid off, security attacks Assane as he makes his way out, and Pellegrini is watching from within the building.

Juliette calls Pellegrini to inform him that Salvatore has to be Assane. That’s no good. Fabienne is clearly upset by this matter but takes the time to write a note in the book Assane left. A knock at the door is not Assane but the man who followed her on the day of the press release. He threatens her life, but she doesn’t budge on informing him Assane’s address. Assane arrives to find Fabienne hanging in the middle of her living room. That has to be triggering for Assane. SO many hits in one day. He takes the book and dog. Youssef compares the sketch with Salvatore on the interview. Assane reads the inspirational note left by Fabienne.

It honestly would have been too easy to get Pellegrini with that. Personally, I would have posted it on Twitter and watched him go down in flames; no need for this middle man that can be easily bought. Unfortunately, we do not get to see any more of Fabienne’s greatness but her questioning Pellegrini is what got her killed, she should have stayed quiet and not brought attention to herself. Youssef is highly underappreciated at work. He should work with Assane. Pellegrini is going to attempt to take Assane out.