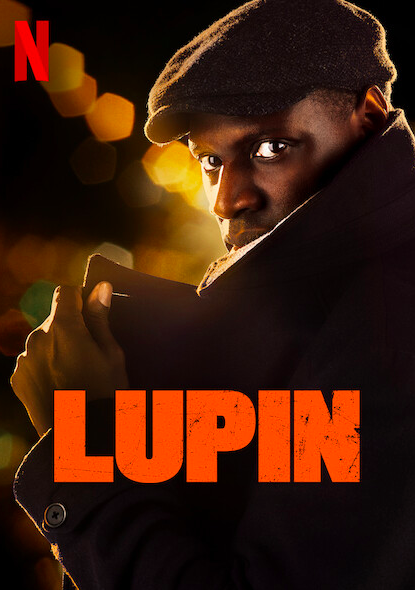 Lupin Perenna (Omar Sy) checks into work at the Louvre in Paris on New Year’s Eve. He and his coworker admire the queen’s necklace but move on as they notice they are being monitored. In the morning, he speaks to Claire (Ludvine Sagnier), his baby mama, about him getting a job and seeing his son, Raoul. However, it would seem that he isn’t the best father in providing for his son, but she sets it up for Saturday and he sneaks a little something to her as she leaves. I find it interesting that his work nametag says Lupin but his name is Assane.

Assane meets with Vincent (Grégoire Colin), Rudy (Arthur Choisnet), and Kevin (Kamel Guenfoud) about the money he owes Vincent. After they hang him over a balcony, he tells them he has a plan on how he can get them money. He breaks down on how they will steal the queen’s necklace as janitors while he suits up as the person to buy the necklace. Back in 1995, Assane and his father Babakar (Fargass Assandé) help Mrs. Pellegrini (Nicole Garcia) when she has car problems on a rainy day. Babakar was hired to be their new chauffeur.

The night of the auction, Assane arrives in a well fitted suit while the other three are downstairs walking in as janitors. The queen’s necklace was once owned by the Pellegrinis but was stolen 25 years ago, deconstructed, then separated, but was found and reconstructed. Juliette Pellegrini (Clotilde Hesme) makes an appearance, wearing the necklace at the auction.

Juliette has the same racist notions as her parents do, but hers are more for her pleasure when she was younger. As the bidding begins, the other three men start taking out security physically since the chloroform isn’t working. Hubert Pellegrini (Hervé Pierre) is absolutely rude towards Babakar as he takes peeks at the library. Mrs. Pellegrini responds by offering Babakar a book to take for his son. He picks Arsène Lupin: Gentlemen Burglar. How fitting.

Assane has joined the bidding, and it is getting hot between him and another bidder. He offers 60 million euros. Rudy turns the cameras off and Vincent and Kevin are dressed as security guards. Once he requests to see the necklace, we get a flashback to when Babakar is accused by Mr. Pellegrini of taking the necklace then is taken away by the police. Mrs. Pellegrini does nothing to help. Assane gets a view of the necklace, then is attacked by Vincent and Rudy. It is obviously a part of the plan but Vincent takes forever as he beats on Assane. Rudy doesn’t get the most discreet car, resulting in a car chase where the three end up crashing into a building.

When Assane visits Babakar, it is unfortunate that he has committed suicide. Mrs. Pellegrini visits the gravesite, offering Assane help, but he declines. Rudy and the boys are caught by the police. Captain Romain Laugier (Vincent Londez) wants to question the staff and clients when he receives a call from Guidera about capturing the suspects. Assane is dismissed but not before the captain searches his body. The death of Babakar is on the news, and Assane is remembering his father and opening the gift that his father prepared for him: the book on Arsène Lupin, which Assane reads out loud.

Two weeks earlier, Assane wakes up to hear that the queen’s necklace has been found and will be up for auction. He secures a janitorial job, a new identity card, and a copy of the necklace that he switches the night of the robbery. Later when he cleans, he picks up the necklace through the trash and walks out.

Officer Youssef Guédira (Soufiane Gurrab) is informed that the necklace is a fake. He suspects that the name Paul Sernine comes from the letters of the name Arsène Lupin. Smart. He leaves in a hurry. Assane visits Raoul early, to the shock of Claire and Raoul. The father and son duo talk about books, then Assane gives him the Arsène Lupin book that his father gave him.

Assane has a plan and I’m quite happy with the way his plans are revealed as the show goes forward. I’m curious as to what happened to him as a young adult for him to be this suave man. It is quite fun and thrilling. The back story on his father pulls at my heart. I want to know so much more. Perhaps I should get the book that Assane was given by his father…