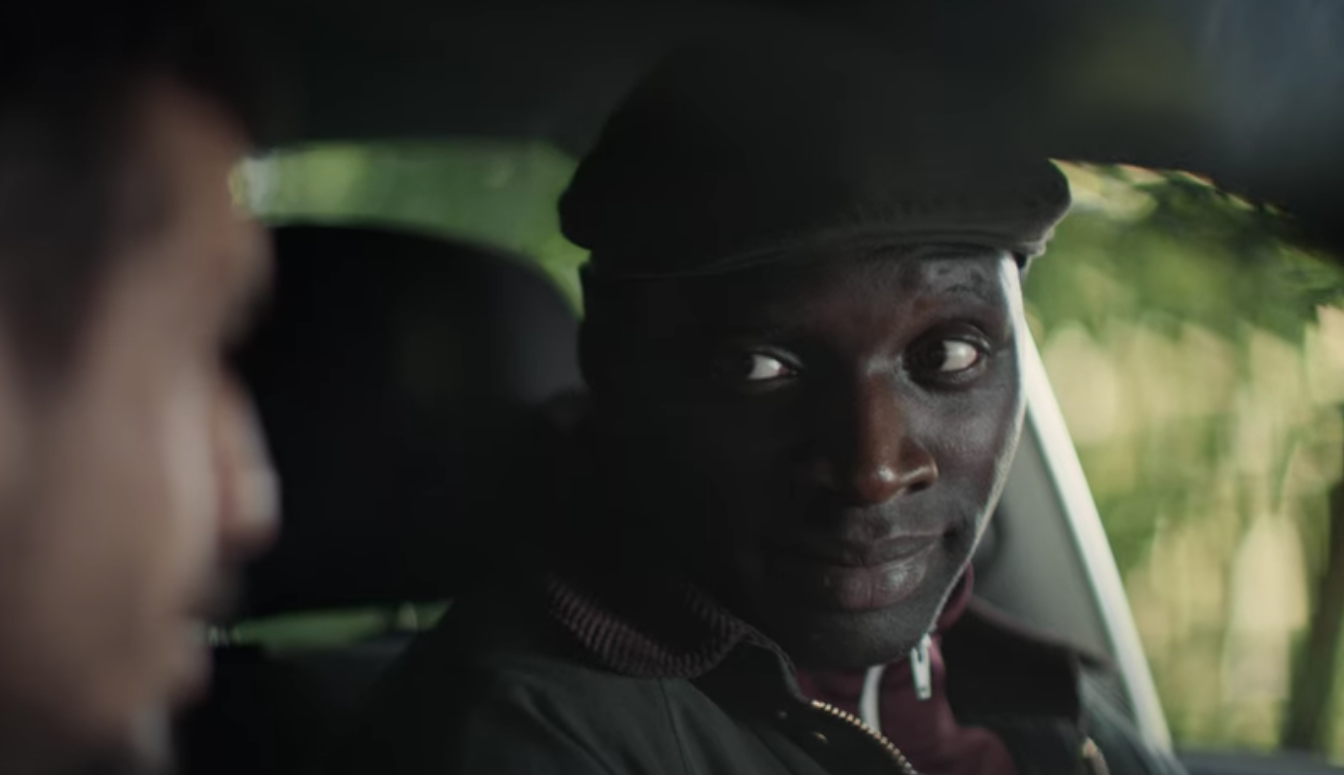 Picking up from Season 1’s cliffhanger, Officer Youssef wakes up to a reminder for the Lupin festival in Normandy. He happens to be on the same train as Assan then later sees Raoul being kidnapped. He hears Assane and Claire yelling for Raoul then tells them exactly what happened and describes the hitman, Leonard. Claire makes the connection to the guy on the train. When Assan steals a car to go after the kidnapper, Claire threatens to call the police but doesn’t go through with it. Youssef joins Assane in the car.

Back in 1995, Assane meets up with Claire after her practice, but she doesn’t speak to him, clearly upset. He follows her into a violin shop where she asks the owner if he can repair her broken violin. He informs her that it would be cheaper to buy a new one then hands her one to play. She plays a beautiful medley but the price is over her budget. Assane, who was hiding around the corner listening, suggests that they rent it. Automatically, the shop owner refuses to rent it to him. When asked why not by both teens, the shop owner states that it is his store and decision. Claire packs up her things and pulls Assane to leave with her. Assane calls him racist before leaving.

Assane asks Youssef about the layout of the area then has him check online maps for directions. Luckily, they find a map in the glove box and find out there’s only one town nearby. During the drive, Leonard attempts to make a call, but there’s no service. Just before they enter Bourneville, he pulls Raoul out of the car and puts him in the trunk.

Claire speaks to the police about the measurements they need to take to find the kidnappers, but the timeline would have her waiting 24 hours for surrounding areas to hear about it.

Leonard stops in the small town square, gets out of the car, and warns Raoul not to make a sound. When he steps inside the nearest bar, every patron gets quiet. He asks for a phone, but only customers can use the payphone. Leonard informs his boss, Hubert Pellegrini, that he didn’t get close to Assane but was able to get Raoul. Hubert is unhappy to hear this and tells Leonard to fix the mess.

Assane and Youssef roll in quickly to town. Leonard, now in his car, watches Assane as he asks if anyone has seen a gray car but is promptly ignored. Youssef makes a call to his coworker, who informs him that they made the wrong arrest on the case. Youssef informs her that he is with the guy they are looking for and needs backup. Assane walks into the cafe and waits for Youssef to end his call before asking everyone if they have seen Leonard and his son because the child has been kidnapped. The store owner comes out and says that is for customers only. Assane puts him in a lock, then notices that a gray car is speeding by. He runs outside with Youssef not far behind, willing to help.

Back in 1995, young Assane talks to his friend, Benjamin, about Claire’s issue. The friend is surprised that the shop owner won’t rent a violin to Claire due to her being friends with him. Assane comes up with the idea that Lupin would steal a violin for Claire in time for her audition. A car chase ensues.

Assane is hot on Leonard’s tracks. They speed through a country road but Leonard loses Assane by taking an offbeat road and drives to an abandoned house. Assane realizes that there’s an offbeat road and takes it. Leonard walks around the house, looking for an entrance then breaks a window and checks out the house. He then pulls out Leonard from the trunk and brings him inside.

While slowly driving and searching the road, Assane receives a text from Raoul stating that he got away with Leonard’s phone and says he’s in an old house. Assane finds the house but texts Raoul that they should do as Lupin’s daughter did in Cagliostro. Youssef points out that it wasn’t Lupin’s daughter but his son. Assane points out that his son is a fan of Lupin and if he doesn’t pick up the error, it’s a trap.

Inside the house, Leonard looks for weapons and eventually picks a shotgun. He tells a tied-up Raoul to relax because his dad has arrived. As Assane and Youssef walk towards the house, Youssef instructs Assane to get low and walk along with him but Assane doesn’t listen nor cares that Leonard could probably see him. Assane calls Leonard and threatens to kill him if he touches his son.

Young Assane and Benjamin scope out the violin shop, waiting for the owner to leave. Benjamin stays behind as a lookout as Assane breaks into the shop from the back. A few minutes in, Assane finally finds the violins but outside, the store owner is making his way back in. He quickly moves out the way and is lucky that the store owner is just picking up his lighter for a smoke.

Youssef thinks that they should call the police to help but Assane informs him that Leonard has the police in his pockets. So Youssef questions what would Lupin do in their position. Assane tells him it’s not a game. Youssef’s backup is an hour and a half away. Assane surprises Claire with the violin, insisting that he borrowed it. Claire is beyond ecstatic.

Back in the car, Assane asks Youssef how much time they have until his colleagues arrive and calls Youssef by his name, informing him that he knows who he is and what he does. Youssef admits that there’s about an hour until they arrive and he would arrest Assane if he was armed. Assane tells him that he knows and thanks him for the info. When he steps out of the car, Youssef realizes that Assane had tied him to the car and won’t let him out.

Inside the house, Assane notices the broken glasses placed as traps but gets around them. Leonard turns off the lights then waits for Assane to make his way further into the house. The two men are both surprised by a chandelier dropping, making them reveal their positions. Assane finds Leonard before he can make a shot towards Assane. The two engage in a fight. Leonard misses his shot but uses the shotgun to try to choke Assane. Assane gets out of the hold and, when he gets the chance, he tosses Leonard out a second-floor window. He checks to see Leonard’s body then yells for Raoul.

At her audition, Assane watches proudly as Claire plays.

Leonard, miraculously, gets up, gets gas, pours it into the gray car, and lights it up. Assane checks each room, yelling for Raoul, then receives a text saying that he should have checked the car first. It blows up just as he makes it outside. Belkacem arrives seconds later and arrests a distraught Assane.

Claire’s audition is stopped by the store owner and the police. As Assane is being taken away, he tells Benjamin that he thought that they could be Lupin. Belkacem tells Assane she doesn’t believe his story and calls it in.

I can’t believe that Raoul is dead. This whole episode was not the resolution that I was hoping for. The chase and the fight were a bit of a letdown for me. However, I’m disappointed that Raoul is presumed dead. The backstory of Assane’s first “heist” seemed about right. It’s unfortunate that Claire was possibly arrested, too. If a guy ever put me in such a situation, I would absolutely not speak to him again but the girl clearly was caught up in Assane. They better find out that Raoul isn’t dead.