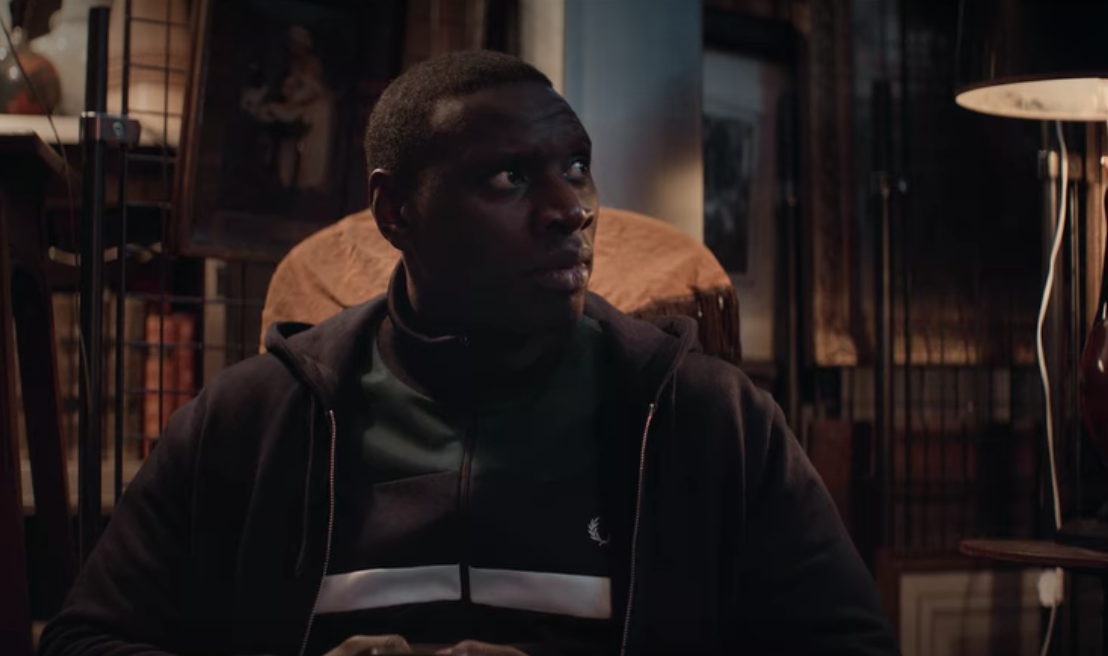 In a business square, a man is bumped into by another and has his briefcase snatched. Assane just happens to see the bump and chases after the thief then returns the briefcase to the owner, Lucas (Franck Mercadel).

Hubert is being interrogated by Laugier and Belckom. He pulls out his phone stating that he is waiting for a call from the Minister of Interior, after threatening the jobs of the two cops. Hubert claims that he has no idea where the insurance contract for his priceless necklace is but is more than willing to give up Assane’s full name when presented with a picture of him. That’s the most the department has ever gotten on Assane’s identity. Belkacem questions him on Leonard but Hubert takes his time to answer. Laugier informs Hubert that they have traced the gun on Leonard to a tenant of one of Hubert’s properties. They suspect that Hubert was behind the kidnapping of Assane’s child. Right on the nose with that one. However, the Minister of Interior calls just at that moment, telling them to release Hubert because of lack of evidence.

Juliette informs Assane that Hubert has been released from custody. She thinks that Hubert will find out that her mother turned him in. Assane tells her not to worry and things will go fine as long as she doesn’t bring suspicion on her.

Hubert meets with Leonard and Pascal who found information on Benjamin and his store. Pascal wants to go after Assane but Hubert assigns Leonard to finish up the business. Once Leonard is gone, Hubert has a private conversation about all the things Leonard has to atone for.

Benjamin is annoyed about the dog that barks when he hears Hubert’s name and wants him gone. Assane suggests that Benjamin bring the dog to his place. Leonard follows Benjamin the moment he leaves his store.

At the police station, Claire is being questioned about Assane’s home address and who the men were outside her home when Youssef brought Raoul to her home. She dodges the questions and has no concern about a few cops outside her place because Assane will never come back. She never wants him near Raoul. Raoul tells his dad which books about Lupin he would like but he’s upset with the ongoing conflict. He wants it to end.

Both Assane and Benjamin don’t see Leonard trailing Benjamin when he arrives at Assane’s home. Leonard waits until Benjamin leaves so he can sneak in. Assane begins to start cooking and dancing to music in his kitchen, unaware of when Leonard walks in or when Pascal attacks and kills Leonard in Assane’s home. Pascal swiftly leaves then calls the cops to inform them of Assane’s address and a violent attack. Belkacem and the team get the information and head out. Assane finds the body and leaves the moment that he hears sirens.

Claire, Marc, and Juliette all see the news headlines on the suspected murder. The cops are taking in evidence in Assane’s apartment. Dumont calls Laugier to have a private conversation and informs Laugier that only they will be having access to the evidence. Suss. Assane calls Benjamin and warns him to leave the store because they know who they are. As he’s walking, Assane calls him to find out where he is and to check if he’s being followed. Pascal follows him to a bus bench. Assane warns him that this man following him is most likely the one who murdered Leonard and is probably going to do the same with Benjamin. I’m concerned for him. Assane instructs Benjamin to get on the bus and hop out right before the doors close. Benjamin successfully does and is surprised when Assane shows up next to him with a plan to disappear.

In 1995, Benjamin and Assane take a tour of the Catacombs and get information on tunnels that are hidden. The two smile at each other secretly.

Youssef is sad about the headlines on Assane because Lupin was not a killer. Benjamin and Assane sneak into a storage facility where they have a secret hideout. Dumont receives a text about Assane’s accomplice, Benjamin, and gives the information to Laugier. Laugier and Belkacem search the shop and find a note about the storage facility. Benjamin is surprised that Assane is commenting on the news instead of them leaving the storage. Assane thinks leaving will reveal he was the murderer. The two hear the cops outside of their door then grab some items. Raoul gets a visit from Marc, who asks what Raoul is reading. Raoul breaks down the story of how Lupin is always able to escape just as the cops search the storage for the guys and somehow open a door down to a tunnel.

Belkacem and Laugier go down to search. Youssef receives a notification about another online article on Assane. He sees a coded message that he immediately deciphers to a piece of locked-up evidence. Laugier and Belkacem bump into a tour group and have the Catacombs shut down to the public. Benjamin and Assane search for their route, knowing that Belkacem and Laugier are close behind. The two men remove bricks and climb through a hole. Their younger selves followed the same map to a ladder that took them up to the front lawn of a business. Assane gives Benjamin the old map to give to the blonde lady who gave it to them many years ago…with a diamond attached.

Youssef goes to evidence to find the Jewish lamp. Hubert, Philippe, and Parcel celebrate with drinks when Dumont arrives to speak to Hubert. Dumont informs him that they have all the evidence and it just needs to be destroyed, as well as dropping all charges against Hubert. Youssef searches the lamp and finds a memory card within a candlestick. Dumont warns Hubert to be more careful but Hubert tells him to relax and the money will come in soon, so Dumont can quit his job and become a writer. Youssef, however, finds files on Dumont’s extra affairs. Benjamin and Assane talk about how they will be putting on a show based on Lupin and it will be their last.

No idea why I doubted Assane in this case. Even when he is set up, he can slip through their fingers. I was worried that Benjamin was about to be killed on the spot but he does have a great friend who is a master of getting out of sticky situations. Claire should have told the truth in regards to Hubert’s men outside of her apartment. That could have connected him to Raoul’s kidnapping. Quite unfortunate of a miss. I wonder where the two partners will sleep for the night.