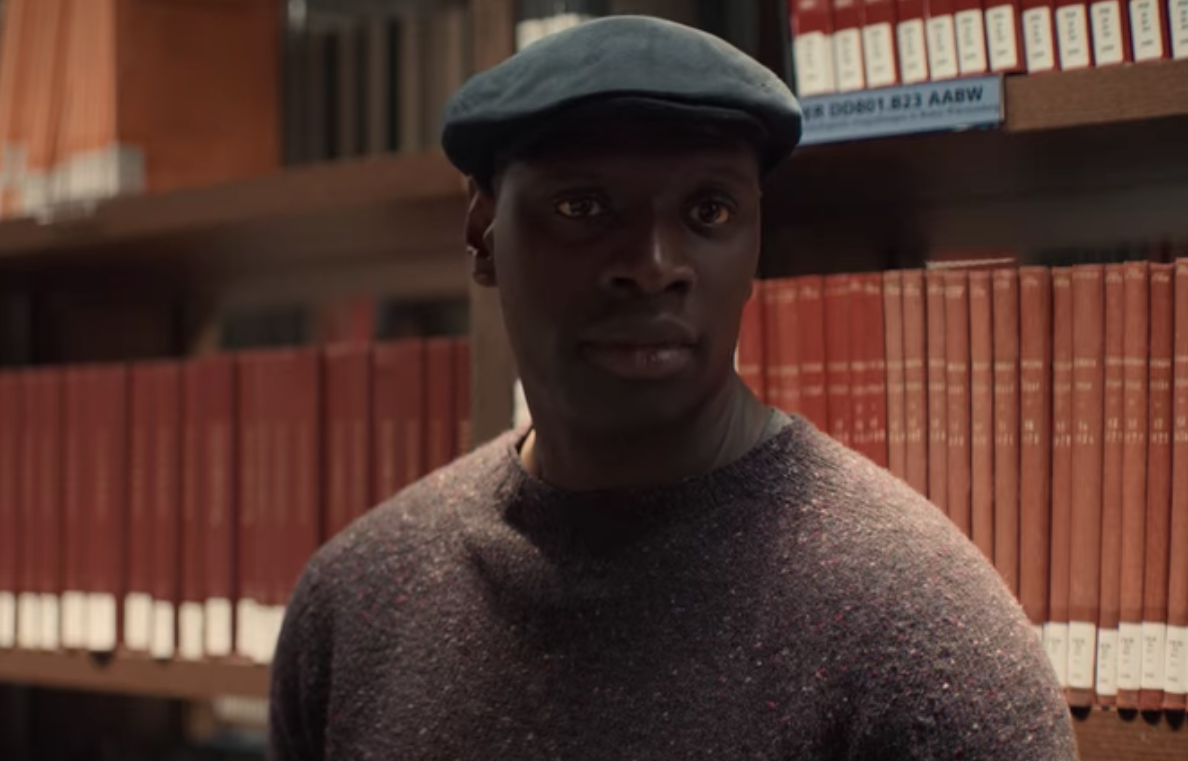 Philippe and Parcel watch as computers and other equipment are brought in for a benefit concert. Dumont breaks down the security procedure for the concert to Parcel. Parcel checks with Hubert on where he will be located for the concert and asks if he thinks Assane will be there, but Hubert isn’t stressing about whether Assane will arrive but when.

In 1995, Hubert interviews Black men for a position, starting with Babakar. He tells Babakar that he wants someone trustworthy and punctual. Babakar gives all the right answers and Hubert hires him on the spot.

Three weeks before the concert, Assane flies a drone into Hubert’s office where he and Benjamin spot a list of names, one being Lucas Lacroix, the man who had his briefcase stolen from him in the previous episode. Lucas is a wealth manager who has all the information on Hubert’s investments and the concert. The two set up Lucas to get “mugged” by Benjamin with Assane as the savior so they can get all his data information copied, including offshore accounts.

Later, the two men hit up a library to get an accomplice by seeking candidates who check out the finest editions of Lupin. After a long wait, they find a young, punk rock man who steals a copy of a book then asks the two what they want. The young man points out their mistakes and questions them again on what they want. Benjamin and Assane give him a makeover as they inform him of his mission: making Hubert think he’s making bad strategies then dangle high-performing investments. For his work, they give him a diamond now, then one later. They all decide on a Lupin adjacent name: Coubert.

Assane makes a call to Lucas with information on a broker who’s trying to headhunt clients, particularly Hubert. The broker is Philippe Coubert. Lucas makes a call to Hubert warning him of the broker who may contact him, accidentally tipping Hubert onto the fact that Philippe Coubert has questionable methods but good results. Philippe speaks to Hubert about his current investments and also informs him that he specializes in making rich people richer. Hubert is interested.

The morning of the concert, Assane and Benjamin talk about how Assane will get in, but Assane doesn’t give up information just yet. In 1995, Assane visits his father in Hubert’s home. Babakar gifts Assane a camera, and the two take a picture together. Assane and Benjamin check up on Philippe, who has all the equipment ready, but he needs just one more man. Benjamin takes on the job. Assane asks Philippe if he has a special case for him. The case is where Assane hides as they transfer the equipment inside the concert hall. Benjamin and Philippe push Assane’s case in, but Dumont stops them to question the cases and their size. Philippe points out that hard drives are the reason for the big cases. Dumont has nothing to say when Philippe opens a case up and there are computers within.

Belkacem gets information on a footprint that doesn’t fit Assane’s foot size. She sees the look on Youssef’s face and checks out what is on his screen. Laguier walks in and asks what is going on. The three of them talk privately in a room. Youssef presents all the information on how Dumont is connected to the now-dead Leonard. Leonard happened to be Babakar’s prison mate, and Dumont was on the case of the missing necklace. The three decide to arrest Dumont as the evidence piles up.

At the concert, Assane puts on his finest suit then three men go over their plan. The computer is set up to send money to Hubert’s offshore account. Benjamin notices that Assane is nervous and reminds him to be calm and methodical as they always have been. Hubert and Juliette prepare for their moment, but Juliette looks nervous. Outside, the three cops are dressed for the concert and the only invitation needed are their badges.

Juliette gets on stage, introduces the performers, then explains that the foundation’s app was created just for this evening so people can make donations to the foundation. As the orchestra begins to play, Benjamin watches the money coming in from the app.

Assane takes the moment to sneak in on Hubert and put a knife to Hubert’s neck. He questions Hubert on all his schemes and finally asks Hubert why he framed Babakar. Hubert admits that he hired Babakar to accuse him of stealing the necklace for the insurance money, then sent Leonard to kill Babakar because Babakar would keep fighting it. Assane takes a minute to think then runs off.

Hubert makes it known that Assane is there. Security goes running after Assane but he locks out a group of them then is chased by more of them on the top landing. Assane runs off to above the stage, giving the security a run for it.

Benjamin makes his way to above the ceiling. Dumont gets a message that Assane is inside and makes his way outside to alert the ready SWAT team that Assane is inside. Assane fights a persistent security guard in the costume room then takes him backstage. Dumont catches Assane but is arrested by Laugier, Belkacem, and Youssef. When Assane makes a move to leave, Belkacem tells him not to move, but Youssef tells her to let him go.

Assane walks on stage just as the performers end their piece. With the backdrop of him and his father, Assane informs the audience of Hubert’s crimes, including embezzling the money from that very concert. Just when the SWAT team moves in, Assane gives Benjamin the signal. Benjamin turns off all the lights in the building, then he and Philippe leave out the front door and run to Benjamin’s car as people chaotically leave the concert hall.

Assane makes a stop at the main audio room and grabs a hidden bag. Benjamin gives Philippe his last diamond. Philippe asks why Assane had all the money wired to Hubert’s account, but Benjamin surprises him by stating that the money was transferred to the foundation’s account. The two leave while Assane, in a fire department disguise, informs cops that the Assane guy they are looking for is on the roof.

As the police run for the roof, Youssef receives a voice mail with a recording of Hubert’s confession. Assane makes his way out of the concert hall and past all of the cops, except for one group that spots him. When confronted, Assane dashes down to the Seine river where a boat is waiting for him to leave. He checks his watch at 9:30.

Claire is assisting Raoul with his homework when the two hear an ongoing dinging noise from Claire’s room. She finds a device under her bed. Raoul stops it and finds a message stating “Raoul’s Bridge” then asks Claire what it is. She explains that it is the bridge where they decided on Raoul’s name. Raoul decides that he is going without his  mom.

Both Hubert and Dumont are placed in the backseat of cop cars and driven to a station. Raoul sees his dad pull in with his boat at the bridge then excitedly hugs him when he walks onto the bridge. Assane informs them that it is all finished and that he will be leaving for a little bit but will always be watching them. He runs off and disappears just as the police pull up to the bridge.

Sweet. Sweet justice. Always methodical, Assane finally gets the upper hand on Hubert and his men. The twist that got me was Philippe. He was obviously the perfect mole for the crime. I honestly didn’t see it coming! Assane finally clears his father’s name, and Youssef finally figured out some clues. Honestly, he just wants to arrest Assane on his own terms. If he ever does. Claire will need to watch Raoul. He may just try to follow in his dad’s footsteps. I wonder what happened to Juliette, though…