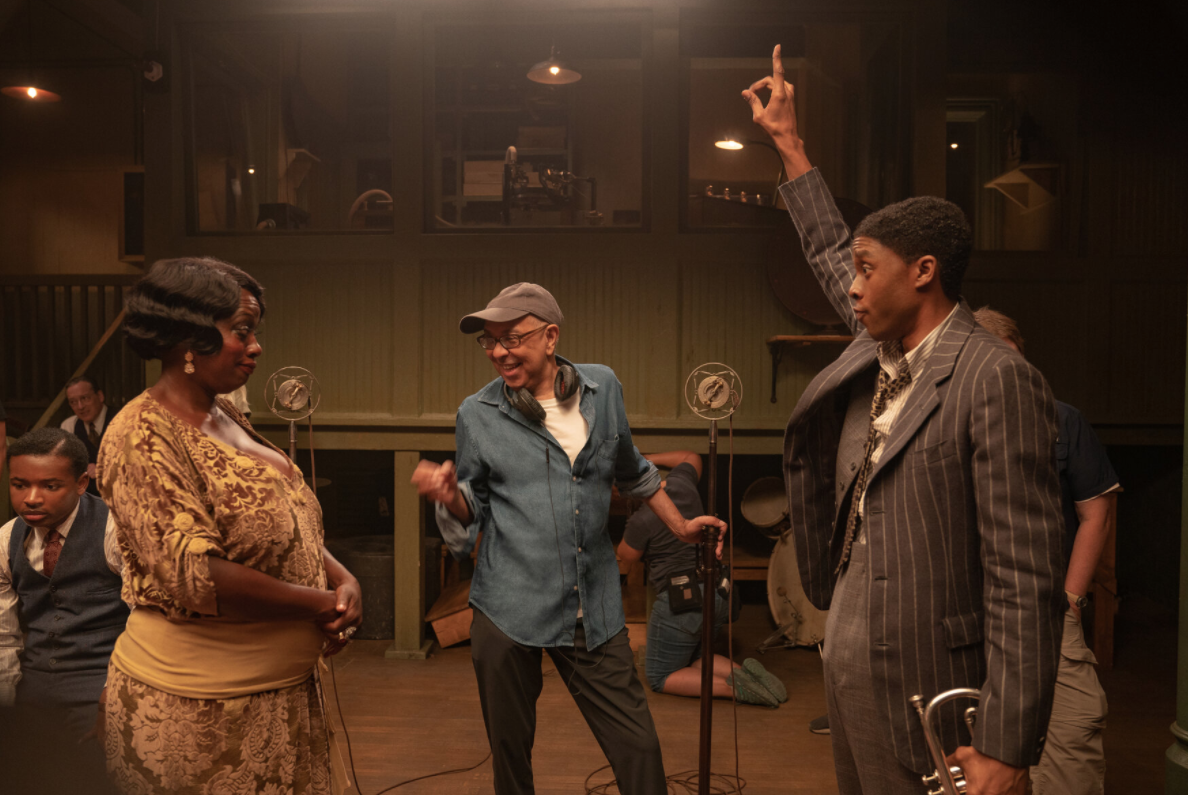 This film has Oscar written all over it. Ma Rainey’s Black Bottom is the latest film that is sure to gain some accolades at the 2021 Academy Awards.

Based on the play by the esteemed writer August Wilson, Ma Rainey’s Black Bottom is another film in the famous “Pittsburgh Cycle.” Fans will note, this is the last film performance of Chadwick Boseman, who passed away on August 28, 2020. And what a performance, too; not just by him, but all the actors.

August Wilson is known for showcasing the complexity of the African American experience, and this film does just that. The film reveals the Black experience through music, community, and the white man. Set in 1920s Chicago, Ma Rainey’s Black Bottom gives a different outlook on the roaring ’20s, away from the gin, guns, and glamour that made Chicago the historical epicenter of “all that jazz.” It is the blues. It is the Black experience. It is the other side of the bright lights.

Ma Rainey’s Black Bottom takes place in the course of an afternoon recording session. A band of musicians prepare to record with the legendary “Mother of the Blues,” Ma Rainey, played by Viola Davis (Fences). Late to the session, the bold and temperamental Ma engages in a battle of wills and patience with her white manager and producer over control of her music. As she stands up for herself and her talents, it will be Ma’s way or the highway.

The film celebrates the power of the music and the artists who knew their worth. There are so many universal themes that make the film still relevant today. The film will and should continue to guide conversations about the Black experience not only in the workplace but in the United States then and now. It is a different kind of struggle.

I walked away with some life lessons myself. I thought about how I should look to be treated in the workplace and how I should always trust in what I have to offer. That should go for everyone, and it is not even the most profound lesson in the film.

The intimate nature of the theater work translates well to the screen. With Denzel Washington involved as a producer, Ma Rainey’s Black Bottom carries the same evidence of thought and care that Fences had. Everything is where it needs to be. The highlights of the film are the dialogue and themes of the work, with the bonus that they are brought to life by an amazing cast.

The characters are larger than life; each time they talk, the spotlight is on them. They control the screen. Viola Davis must have found the recipe for success with August Wilson. Having secured her first Academy Award for Fences in 2016, there is no doubt Davis will receive praise for her role as Ma Rainey. What a transformation. The makeup, the body size, the musicality, all make for a great character that Davis brings to life on screen. She steals every scene she is in. You cannot take your eyes off of her.

Boseman portrays Levee as a young man always looking for a good time, angry, masking the pain he has inside, impulsive, and looking for a way to shoot his shot romantically and professionally. He is complicated, charismatic, and hardworking. If the film were set in 2020, he would be the millennial of the group. All of the characters are complex and portrayed mesmerizingly well, but Davis and Boseman give epic performances.

As fantastic as this film is on screen, it still comes off as a staged event. The sets are framed as such. The dialogue and flow feel like it is still theatrical in nature. It works, but it’s something you cannot ignore. Visually the set design operated like a stage. There is nothing remarkable about it, but that’s the point. The film focuses on the people. It is a strong, character-driven film. The characters shine through action, dialogue, and costume.

It is a great story, performed by great actors, written and directed by great talent. You won’t want to miss it. Ma Rainey’s Black Bottom will be available on Netflix, December 18, 2020.