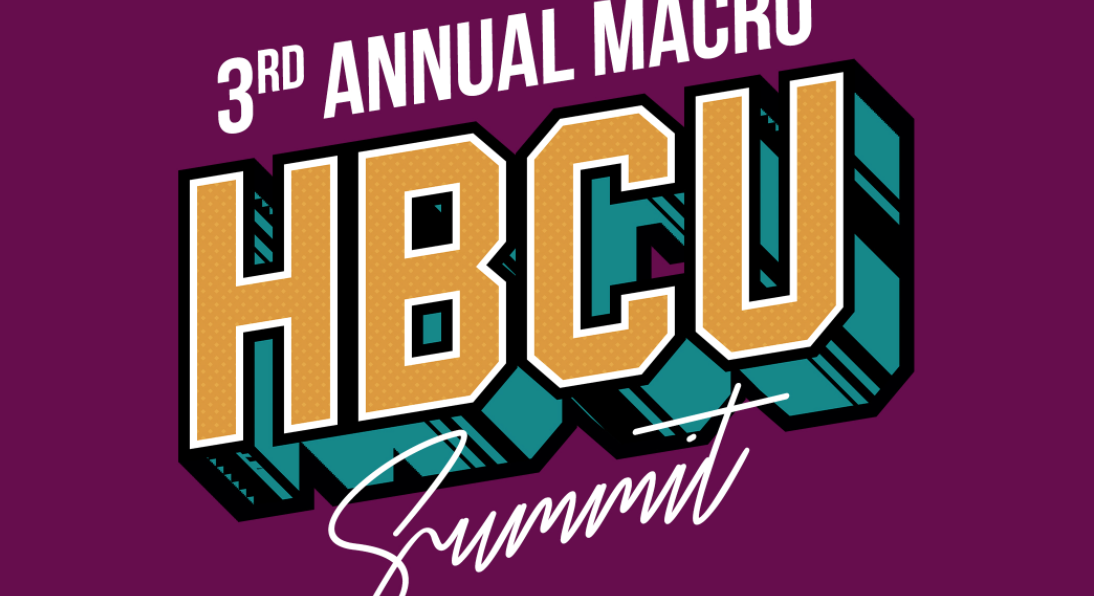 The MACRO X HBCU Entertainment Summit (www.StayMACRO.com), presented by SheaMoisture, Beats, Warner Bros. Pictures, The National Urban League and Live Nation will be in-person this year for its third annual showcase on Saturday, October 23, 2021 in Atlanta.  This year’s summit will take place at Atlanta’s Atlantic Station between Fowler Street NW and 20th Street. The micro-festival will host an array of panels and programming, a pitch competition, food trucks, giveaways, a docuseries screening, and a film screening.  This year, the summit will also be available to students at Historically Black Colleges and Universities (HBCUs) across the country via livestream on TikTok starting at 12 noon EST.

The inaugural summit debuted on the campus of Howard University in 2019 with the mission to engage and educate students on the vast careers, opportunities, and paths in the media and entertainment fields.  This year’s event will include appearances by Aunjanue Ellis, Prentice Penny, Nicole Ari Parker, Nicco Annan, Young Nudy, and Stephen “Dr.” Love as well as a host of entertainment industry executives.

The event is open to students and alumni from Atlanta HBCU’s – Clark Atlanta University, Morehouse College, Morris Brown College, and Spelman College as well as aspiring media and entertainment professionals in the Atlanta area.  All attendees must register to attend at https://themacrosummit.splashthat.com/.  Attendees must provide proof of vaccination or a negative COVID-19 test within 72 hours of the event.

Beats joins as a sponsor punctuating its long-standing commitment to empower Black talent into an impactful mentorship program for HBCU students across the country — providing unmatched industry resources and access to the next generation of creatives. Building on this initiative, Beats partnered with MACRO, the Academy Award® nominated media company driven by Black people and people of color, to evaluate and provide constructive feedback to three finalist teams on their big idea for the next great film before naming a winner at the MACRO X Beats Film Pitch Competition.

The National Urban League and the Urban League of Greater Atlanta will activate a mobile vaccine and testing center in a national pledge to go “All In” against COVID-19. National Urban League ambassadors, powered by Black Men Engaged, will encourage college-aged students and event participants to get vaccinated and pledge to create safe spaces, while also providing direct access to COVID-19 vaccines and flu shots. The partners aim to make the event feel like a safe zone for students and community participants, hoping to minimize the fear and anxieties that come with socializing during the pandemic.

Live Nation, the world’s leading live entertainment company, is committed to diversifying the employee talent pipeline coming into the live industry. As part of that effort, Live Nation has signed on as a sponsor and executives from the company will be onsite to host a panel discussing the different facets of careers in the live entertainment industry, while also speaking directly with students to offer insight into current and future career opportunities.

Warner Bros. Pictures will sponsor the closing event of the summit—an advance screening of its upcoming highly anticipated film King Richard.  The drama follows the journey of Richard (Will Smith) and Oracene Williams (Ellis) as they guide daughters Venus and Serena Williams on their path to changing the sport of tennis and the world forever.

Below is a partial listing of the schedule of events.

All The Way Live. Presented by Live Nation.

A moderated discussion about careers in the live music industry.

The Playbook: Charting Your Unique Path to Hollywood – A Virtual Panel

This virtual panel will educate viewers on the strategies, skills and mindset needed to get a foot in the door. What to do and what not to do when building a personal network, how to make a great impression and what it takes to survive and thrive in media and entertainment will all be discussed.

This roundtable discussion focuses on utilizing skills that are often undervalued and/or overlooked and turning them into incredible careers. Executives will speak on redefining what it means to be a storyteller in this business, creating one’s own lane and manifesting dreams by activating one’s unique skills, gifts and interests.

Screening of MACRO Presents: Watch Them Work. Powered by SheaMoisture.

This digital docuseries, follows two current HBCU students (Clark Atlanta University’s Darris Rushing and Howard University’s Rachel Motley) as they handle their books and their business while they do the seemingly impossible: run their own successful enterprises while juggling the demands of a full course load at their respective schools. In the two episodes featuring these two scholar-business owners, viewers will learn their successes, their challenges and their why in this engaging web series that will be followed by a fireside chat to discuss.

MACRO and Beats offered current students, 2020 and 2021 graduates of Atlanta’s Morehouse College, Spelman College, Clark Atlanta University and Morris Brown College the opportunity to pitch their passion film project to top Hollywood executives.  The executives will evaluate and provide constructive feedback to three finalist teams on their big idea for the next great film.  One team will win the opportunity to attend the Beats Black Creators Summit later this yearas well as The 5th Annual MACRO Lodge at Sundance Film Festival in January 2022.

A Live Performance by Young Nudy

Directed by Reinaldo Marcus Green (Monsters and Men) from a script by Zach Baylin. Armed with a brazen plan, Richard Williams (Will Smith, who also produced) is determined to write his daughters Venus and Serena into history. Training on Compton, California’s neglected tennis courts, the girls are shaped by their father’s unyielding commitment and their mother’s balanced perspective and keen intuition, defying the seemingly insurmountable odds and prevailing expectations laid before them. Aunjanue Ellis (If Beale Street Could Talk) stars as the girls’ mom and Richard’s wife, Oracene Williams.