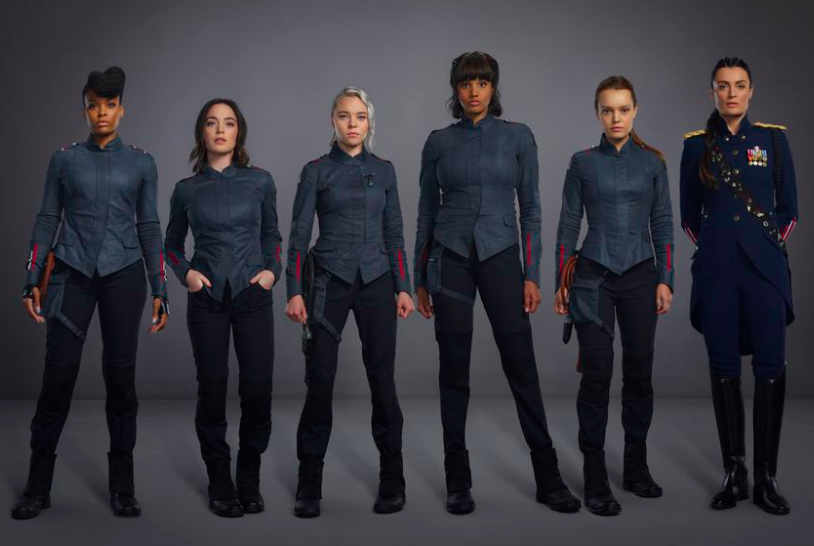 Freeform’s new show is finally here and I am all for it. Motherland: Fort Salem has teased us for months with their intriguing trailers.

The show comes from Claws creator Eliot Lawrence and six executive producers, which include Will Ferrell, Adam McKay, Kevin J. Messick, Steven A. Adelson, and Maria Maggenti. It is set in an alternate America where women who were actual witches ended their persecution over 300 years ago by cutting a deal with the government to fight for their country. The new series follows three young women from basic training to early deployment. Freeform is all about being bold and taking risks, and this show is no exception.

The show stars Taylor Hickson (Deadly Class) as Raelle, Jessica Sutton (The Kissing Booth) as Tally, Ashley Nicole Williams as Abigail, Amalia Holm as Scylla, Demetria McKinney (House of Payne) as Anacostia, and Lyne Renee (The Gentlemen) as General Adler. The acting is decent. The rebellious streak that Raelle has is good to a certain extent. At times she wavers between rebellious and just distracted. Tally is naive and nice. She clearly wants to be friends and not just teammates. She has been very sheltered her whole life before boot camp, and I’m not sure if that will help or hinder her. Abigail is mean and stuck-up, but it could be insecurity or something else or just the way she was raised. I sense some real mother-daughter drama in the future.

I’m not sure how to really read any of them just yet, and that’s okay. I at least want them to succeed, which is a good first episode intro to characters. I want to dive deeper into the characters of Anacostia and General Adler. We only got a sliver of what they are capable of, and I’m obsessed with the two of them. There are many questions that I can only hope the show answers as it continues.

Episode 1 has a lot going on, which could either affirm that this is a world that has been thought out and a show that plans to have more than one season or that they’ve bitten off a little more than they can chew. Fingers crossed it’s the former. What we see is the traditional gender and power roles flipped, which is very cool but more details are needed. Dominant women are on the front lines fighting terrorists and threats with supernatural military tactics and weapons. Combat magic is very much a thing in this show, and it’s awesome to watch — and that’s just basic training. I need more of it.

The bad guys or terrorist threats in this show are called the Spree, and they are terrifying. The opening sequence is intense. They know a thing or two about magic. This gives some insight into the organization by the fact that magic and women go hand in hand. Not sure the idea of women being both the country’s savior and its destruction is a balancing act that people will get behind. I would love to know more about the Spree, for that matter. The absence of men is highlighted, even so much as a whole community lives without them. Their absence is noted for several reasons, which include sex and a tattoo that shines once you’ve had it. Where are the men? What are they doing? I am intrigued to see what role, if any, men will play amongst the female heroines.

The opening title sequence is enticing as well. There’s a woven tapestry thing going on. I immediately think of storytelling. Stories of witches have been passed down from generation after generation. In history books, fiction and nonfiction, TV, film, even in cities like Salem, witches have an assorted background. It’s cool to see this idea that this is the history woven in the fabric. This is what happened. The women showcased are from all backgrounds as well. The lineage of women of all colors, creeds, and cultures coming together to protect the country is what makes this show such a positive influence for today. The look of respect and reverence regular people give these women as they march off to boot camp is not just because they are serving their country, but because they are witches. It’s such a reversal that hasn’t been highlighted.

As mentioned earlier, there’s a lot going on. There’s powers of healing, powers of persuasion, something like the Cruciatus Curse from Harry Potter, and tornado-making powers. That’s just a taste of the kind of power these women have. It’s an interesting spin, especially when it doesn’t require a book, wand, or cauldron. There’s an all-knowing presence that I hope is explained. There’s magical drugs, LGBTQ relationships, and a connection with the three ladies — Raelle, Tally, and Abigail — that I can’t wait to see explored in more depth. There are some cool ideas that I hope are fleshed out. This has the potential to be a really awesome series.

You can catch Motherland: Fort Salem on Wednesdays at 9 p.m., only on Freeform.