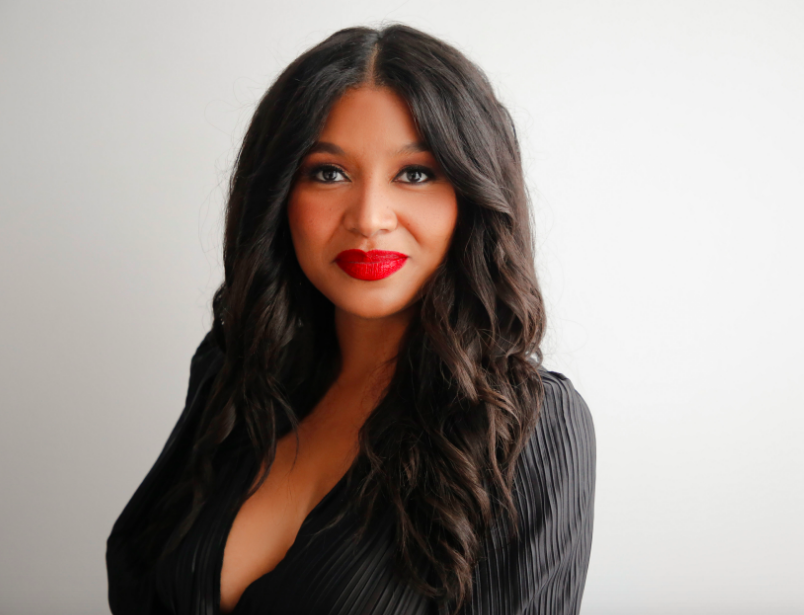 Megan Smith knew early on that her commitment to fashion was going to take her places.

As a competitor on the Amazon Studios competition series, Making the Cut, Smith presented a body of work that blended strength and femininity in a way that impressed the judges. It is that same sensibility that echoes in Smith’s life. Now living in Los Angeles, Smith reflects on the journey that brought her from Kansas City to Los Angeles and her journey in fashion and being an entrepreneur.

Born in Kansas City to a 16-year-old mother suffering from schizophrenia, Smith would learn the value of strength and perseverance early on. But beyond that, it would be Smith’s mother that first introduced her to the world of fashion and the art that clothing could be.

“Believe it or not,” Smith says, “a lot of my fashion sense does come from my mother. She had me young so we sort of grew up together. She was heavily into fashion and makeup and glamour. But it was my grandmother that taught me how to sew. So, I started making clothes for my Barbies. If I didn’t have fabric, I used my socks. Then they bought me a sewing machine. Despite her having her illness, my mother is very creative. I know there were a lot of things she wanted to do but couldn’t because of it.”

Living in a city not widely known for being a center of fashion influence didn’t dissuade Smith from pursuing a career in the industry. With a wide range of influences around her that included everything from Prince to Ebony Fashion Fair to Vogue, it was the era of ’90s supermodels that birthed some of her earliest creations.

“I would look at Vogue magazine and music videos and just the women around me and my family — everyone was always so well put together and fashionable living in Kansas City,” Smith remembers. “My mom and I had this deep love for ’90s supermodels. I just remember being in like Cindy Crawford and Naomi Campbell. We both followed them, and that influenced my aesthetic: feminine with a little bit of glam, but an edge and that all comes from pop culture.”

On Making the Cut, contestants are challenged with applying their personal design aesthetics to a variety of different styles and influences. For Smith, adapting her personal style to the weekly tasks had its challenges. Ultimately, it was her commitment to a strong personal style that allowed her to navigate through the various competitions without losing sight of her own personal aesthetic. Additionally, it was the time spent designing the creations that observers aren’t privy to, a time that Smith was able to navigate through week after week.

“The overall design process is not as smooth and easy as it looks on the show. It’s a lot of like back and forth and changing a lot of things,” Smith says. “I would start making a neutral dress, and it would turn into something completely different.

“I think the environment of these beautiful locations like Paris and Tokyo influence how the design process changes. Working on my own at home, I can sketch out a collection, but as I started to make it, it totally changed depending on my mood or the aesthetic.

“In Paris, it was easy to translate that aesthetic into my brand, but in Tokyo, I will admit I did get a little intimidated by the streetwear challenge. I’ve never designed streetwear in my life. My aesthetic is more clearly defined. I know exactly the woman that I’m dressing now. I just envisioned myself dressing that woman and she said she wanted streetwear. How would I translate it? I really was happy with what I created, and I think it definitely still was very true to my brand identity.”

For Smith, the next step is taking all the valuable critiques and feedback from the experience and applying it to her booming business to become a global brand.

“I have a clear vision on where I want to take my brand, and I have to thank the show for it,” she says. “Before going on the show, I had an idea, but, being a new brand, I was still figuring out a few things. As the competition went on, I was like, ‘Okay, I got this. I know exactly who [my customer] is.’ That has helped me in more ways than I can say. It gave me a lot of confidence and more drive than I already had to get my brand out there and make it big.”

Making the Cut is currently streaming on Amazon Prime.