Adrian’s subterfuge at the church in the last episode of The Mist seems to have worked for the fabulous four. Father Romanov looked betrayed as they scrambled outside, and we learned that Adrian is a pretty convincing actor when he wants to get something from someone. We also see that he’s pretty loyal to Kevin. But now they’re out in The Mist tripping over dead people. Things could get dicey.

I always forget how much religion plays a part in Stephen King’s stories. The storylines aren’t often overtly religious, but it tends to be threaded through the larger narrative. In some cases, it’s subtle. In other cases, it’s right in your face. The Mist is one of those stories where it’s an interesting combination of both. Father Romanov seems fairly benign in this episode, but I can’t help but think he’s going to become problematic. He’s very focused on saving people’s souls, which can mean different things to different people.

I’m only slightly annoyed that the fabulous four seems to be able to travel through The Mist fairly unharmed after they escaped the church. They made it to the gas station without incident and crossed paths with Clay who’s looking for his son – the dead person Kevin tripped over. For some reason, Kevin decides to lie to Clay about seeing his son dead in The Mist. This feels really unnecessary, but Mia follows his lead. Kevin’s willingness to lie, then try to manipulate Clay to give him the car shows that he has the potential to become a villain. His willingness to manipulate someone else’s misfortune for his own agenda will probably show up again in future episodes.

Mrs. Raven is definitely acting strange, but she is grieving her husband and looking for meaning in the world now that hers has been destroyed. I appreciate how her grief is playing out. It seems odd in a setting where people need to lean on each other to survive, but it really isn’t. She was really in tune with nature at the beginning of the first episode. She saw the power of The Mist up close as it turned Mikhail into a moth. Her being drawn to the spider isn’t all that strange.

There are always those characters in horror situations that don’t understand just how serious things really are until something bad happens to them. Unfortunately, the something bad often negatively affects someone else. Vic and Ted, the douchey guys from the video store, set themselves up for failure. It’s not cool that their poor choices lead to Lila getting killed by some…thing in The Mist. Plus after he brought The Mist into the bookstore, Vic pushed past Alex and Lila and left them alone. Jerk.

After seeing him snatch the glass jar from Mrs. Raven and kill the spider inside, it’s becoming clearer that Father Romanov is determined to turn The Mist into a Biblical situation, which makes him the expert that everyone needs. This behavior is going to continue to escalate as The Mist escalates. 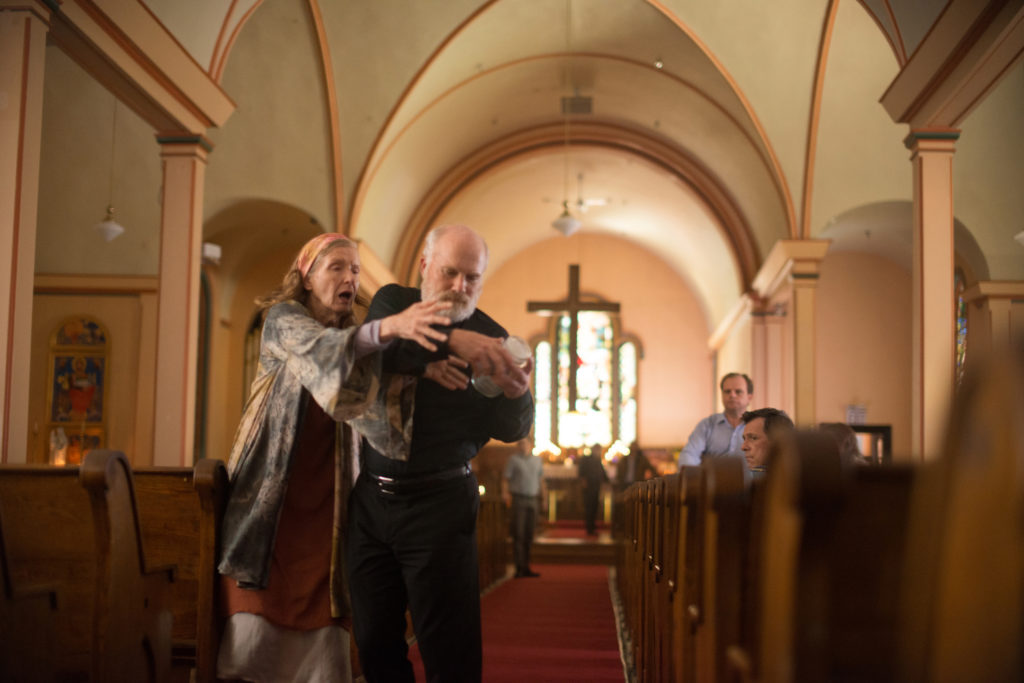 Yep, it was time for Vick to be forced to leave the mall. He couldn’t believe the dead bodies, creepy Mist, and frightened witnesses. He needed proof, and his reckless behavior caused two people to be killed. While his exile makes sense, those mall rules are bound to be a source of trouble down the line.

The potential for things to take a turn for the crazy is being nicely established amongst all of the different groups. This is where the stories really get interesting and the horror starts being played out through the actions of the characters.

Who do you think is going to make a crazy move first?