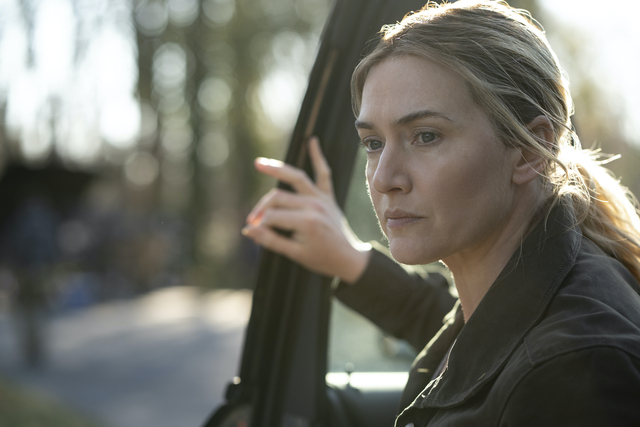 Is it a bird? A plane? Laura Palmer wrapped in plastic? No, it’s 16-year-old Erin McMenamin (Cailee Spaeny), the newest half naked, dead, white woman to wash up on shore, triggering a series of small-town mysteries in HBO’s crime drama miniseries Mare of Easttown. It’s also Katie Bailey (Caitlin Houlahan), missing for over a year and presumed dead; another missing girl Hillary found murdered; and a recently kidnapped young sex worker and addict Missy (Sasha Frolova). Are these cases related? It’s up to steel-jawed detective Mare Sheehan (Kate Winslet) to find out, but only if she can manage to separate her family trauma and drama from her investigation.

Relying heavily on the no makeup, baggy clothes, and regional dialect school of acting (all three assuring award wins), Kate Winslet’s title character is at the uncomfortable intersection of copaganda and a virulent strain of white devilry particular to women. Mare publicly accuses her ex-husband Frank (David Denman) of fathering a child with Erin. Mare also steals drugs from the evidence locker and plants them on her grandson’s mother Carrie (Sosie Bacon) to try win custody. When she’s found out, she’s briefly fired before exploiting her young colleague Colin Zabel (Evan Peters) to remain in the investigation loop. Mare gets Zabel killed because of her lack of professionalism and preparation, and yet somehow manages to be reinstated as a cop by the end of the show. This is an annoying aspect of Mare of Easttown, but to its credit it is extremely realistic: every day well known bad cops escape accountability and Mare Sheehan is no exception.

In many ways, the manufactured sympathy for poor, downtrodden Mare (who is her own worst enemy) as she grapples with her son Kevin’s (Cody Kostro) recent suicide feels like it is supposed to extend to these other bad cops we hear about in the news who frame people and much more, with the same level of impunity Mare enjoys. Mare of Easttown seems to be encouraging us to see them as whole, flawed individuals having a bad day, or bad year, just as tired, limping Mare is, not perpetrators of the systemic abuse and corruption that actually shapes and promotes their illegal behavior. Casting Kate Winslet in an advocate role for abused girls is also irony at its peak, considering Winslet has often spoken wholeheartedly in defense of convicted child raper Roman Polanski and accused pervert Woody Allen, only very recently rescinding this previous support.

But Mare isn’t the only white woman in the show who gets away with multiple crimes. Her best friend Lori Ross (Julianne Nicholson) actively impedes Mare’s murder investigation and tries to cover up her husband John’s (Joe Tippett) rape of underage Erin. Lori even helps John frame his brother Billy (Robbie Tann) and encourages John to kill him. But Lori is not arrested or even questioned in the matter. Her only punishment is raising her pedophile husband’s rape baby. This is not justice.

Worse, the show doesn’t even call John Ross’s crime what it is. It labels the rape of a minor by a 40-something man an “affair,” a “sexual relationship,” and “hanging out” as if these euphemisms are what happens when a grown man sexually abuses a teenage girl and gets her pregnant. “You’re just a child!” John shouts at Erin over the phone when she wants to see him in person after things ended, indicating he is well aware of her age in relation to his own even after she had his baby. The fact that this is also incest that began at a family reunion only adds to the gross.

It’s adding an insult to injury that Mare of Easttown took equally terrible The Undoing’s red herring that the young son was the murderer and runs with it, revealing young Ryan Ross (Cameron Mann) to be Erin’s killer, bringing a level of nihilism into the world that nobody needs.

Mare of Easttown is disturbing for all the wrong reasons even before we get to how it handles race on screen.

The handful of Black actors featured are a perfect example of the difference between diversity and inclusion. While Chief Carter (John Douglas Thompson) is an important character with a lot of screen time, he doesn’t have the privilege of a first name nor do we get even a small insight into his life outside of work, making him a one dimensional prop to hold up Mare at work. When it comes to Bethy (Chinasa Ogbuagu) and her heroin-addicted brother Freddie (Dominique Johnson), we at least see inside Bethy’s home and learn about her personal struggle. But we don’t even meet her husband at Freddie’s wake, and by the end she is on screen only to help white women with their traumas.

Mare’s therapist Gayle Graham (Eisa Davis), like Chief Carter, is important but superficially drawn, essentially painted as Mare’s emotional and psychological “help.” Mare’s daughter Siobhan’s (Angourie Rice) girlfriend Anne (Kiah McKirnan) also exists in the story as impetus for Siobhan’s future decisions, not a whole character of her own right. This is all taking place in stark contrast to the white characters, every single one of whom are three-dimensionally written and acted, including the most marginal ones like Guy Pearce’s Professor Richard Ryan and kidnap victim Hillary who doesn’t even appear on screen. The divide between Black and white folks is as clear as it is disappointing in Mare of Easttown.

Yes, though Mare of Easttown handles the theme of intergenerational trauma solidly, as well as presenting a creepy portrait of small-town life where (sexual) predators hide in plain sight, this isn’t enough to redeem the broader narrative. My favorite aspect — other than Evan Peters’s excellent, but all-too-brief performance — ended up being the unique heritage crochet blankets draping the various furniture in color schemes I’d never seen before with those particular vintage patterns. The black-edged goth granny square quilt with neon contrast patches was the visual motif that caught my eye constantly; kudos to the creative set designer who took classic Americana designs into some funky and unexpected territory. This was the only thing that sets Mare of Easttown apart from other crime dramas.

So, the questions become: Why do we need shows like this that reinforce white supremacy and normalize police corruption in our current political and social climate? Do we need fictional narratives where a child is a murderer? Can you sport the #DefundThePolice hashtag in your social media profiles while singing the praises of copaganda like Mare of Easttown? SNL’s brilliant spoof sketch “Murder Durder” packed an effective punch in calling out all the crime show and white devilry tropes we see over the course of Mare of Easttown’s seven episodes in less than five minutes, which is all the time you need to see just how problematic this kind of storytelling has become.

The recent Starz documentary Confronting a Serial Killer, showed in harrowing detail how Sam Little’s white victims were prioritized and because of them he ended up with life in prison; however, Little was still able to get away with killing almost 80+ women of color. Further, North America has an epidemic of missing and murdered Indigenous women, with serial killers suspected of many of these crimes happening on and around reservations. But since it’s white women who are the protected class, we don’t even get justice for these crimes against women of color, nor do we get the prestige, all-star treatment for marginalized women’s stories on television.

Ultimately, Mare of Easttown is a fancy seven-hour episode of SVU that nobody asked for, and certainly nobody needed. Stop glorifying cop stories. Maybe if we defund the police on screen, it’ll make it easier to imagine real life without them, too.