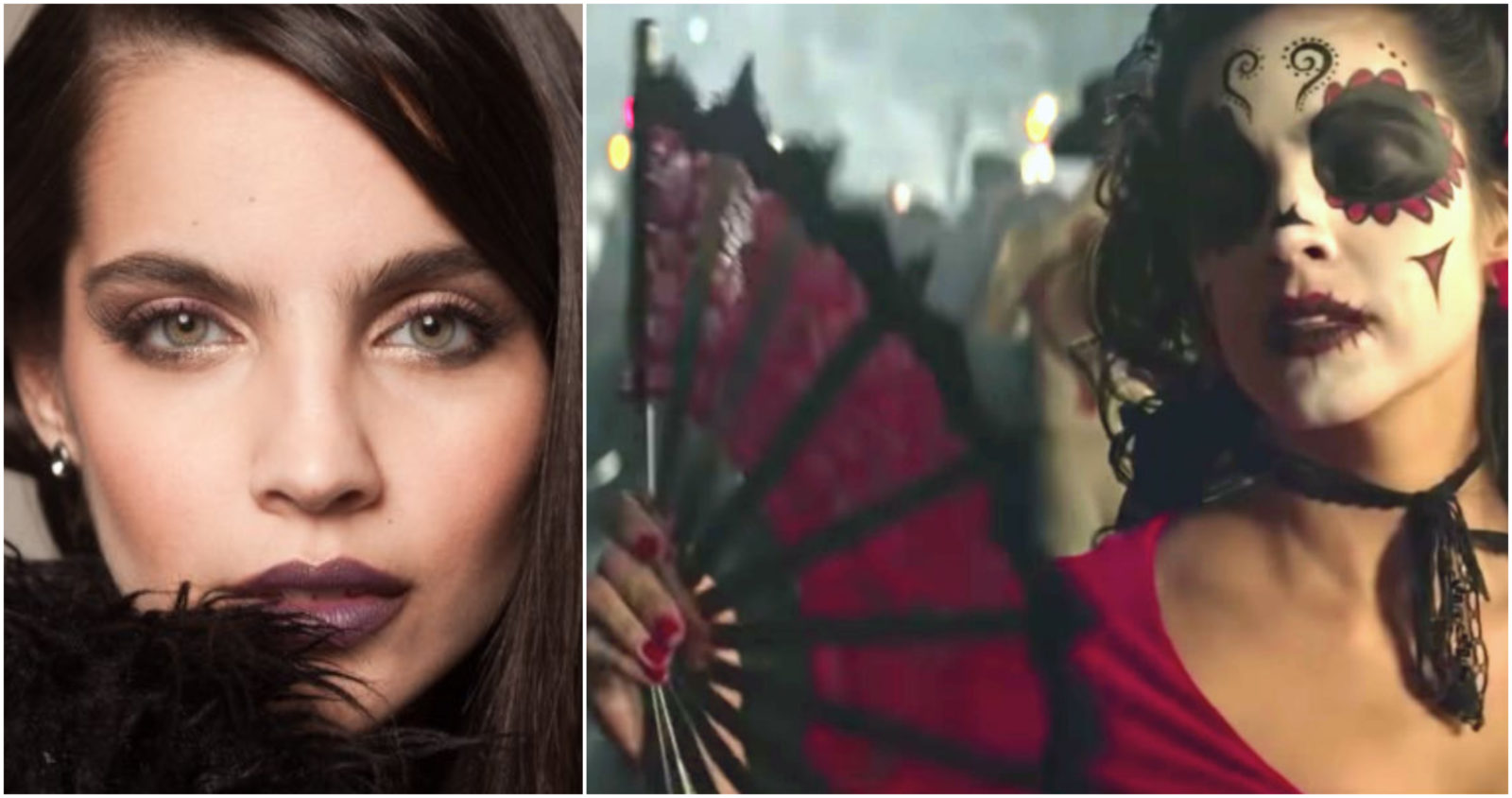 María Gabriela de Faría is no stranger to the small screen. She’s an award-winning television actress who was also the star of telenovela La Virgen de la Calle, based on Jane the Virgin’s Venezuelan predecessor.

BGN chatted with the 26-year-old Venezuelan actress on the set of SYFY’s new show, Deadly Class, where she plays Maria Salazar. de Faría’s character Maria is hardcore. Her weapon of choice is a fan equipped with sharp blades. It was a pleasure speaking with María. She is very open in discussing the blast she’s having on the set of Deadly Class as well as her ongoing struggle with anxiety.

I’d been working with Nickelodeon for like over 10 years. It’s a very different way of working and acting. Here it’s amazing because I’ve never played an assassin. I’ve never played such a powerful woman. That’s great. I feel like I have a new set of skills now that I’m playing Maria. I’m so lucky because I feel like the kids that watch Nickelodeon wouldn’t watch this. The kids or the adults, whatever who are going to watch daily class wouldn’t watch my series at Nickelodeon. I still have like those very different audiences. It’s great.

On Learning from Her Character

Okay. Here’s the thing. I feel like this is going to sound wrong, but I feel like Maria and I have so much in common. In terms of, of course I wasn’t kidnapped by the cartel or anything. I was in an abusive relationship, a very shitty relationship. I understand the feeling of being an outsider, of feeling anxiety. I have dealt with anxiety for years now. I’m not medicating, medicated as Maria is. I understand that and the desire to cover it, so people won’t see it. I’ve learned from Maria to be honest. To enjoy the freedom that I do have in my life, because I know that people like Maria don’t have it. Really, they don’t have any other option. To make sure that the decisions that I’m making are taking me to the person that I want to become.

On Bringing Her Own Touch to the Part

Well, I’m Venezuelan, but Maria is Mexican. I’ve lived in Mexico before. I have like so many Mexican friends. What I adore from the show is that the directors, and the showrunners, and the writers really make us part of the creative process. They would call us or text us if they have doubts, or if they feel like we can give them something else. I would talk to Rick about things like, no you don’t say this like this, you say it like that.

Maria has some things in her room that I requested, and Rick gave them to me. The audience won’t know that, but as an actor to have that freedom of bringing your own persona to the charter, it just gives you so much to work with. It’s a relief. It’s so refreshing. Actually, Chico and Maria talk a lot in Spanish during their scenes. That’s awesome, because I don’t think you get to see that a lot in American television.

Definitely candles. I have a little red book that’s hidden. I don’t know where it’s hidden right now. I put it under the bed, but it’s a book where I write like, all my anxieties and fears. That’s how critical it is. I’m gifting them to Maria, because where else can they go? What else? A couple of posters from like, a Spanish group, very famous in the ’70s. It’s been more of me bringing my culture. It’s been more about doing it on set, like during the scenes. They’ve given me the freedom to do it, so I’m so lucky.

On the World of King’s Dominion

In King’s Dominion, I don’t think friendship, like true friends exists. Maria and Saya are friends, but at the same time… There’s the desire of friendship, but at the same time you know you cannot trust that person. Maria won’t tell Saya that she is being medicated. She has these mental issues. They would see it as weakness and they will use it against you. Although you have the desire of friendship, you know you can’t really trust them. It’s a very lonely world.

For example, with Chico and Maria, they grew up together literally in the same house. They know each other very well. There are no secrets, apparent secrets between them. That’s different. Of course, you cannot have family. You cannot have friends. You can’t have personal relationships, because it would get in your way. You will develop feelings and an assassin cannot have feelings.

On Timely Topics and Themes Like Anxiety and Depression

I’d been suffering with anxiety for years. I caught myself lying to my friends because I don’t want them to know. For example, I was at a party like a year ago. I was having this anxiety attack, like this panic attack. I wouldn’t tell my friend, my very best friend that I needed to go home, to just breathe because I had an anxiety attack. I didn’t want them to see me as weak or that I have a problem. That’s wrong. You have to talk about those things, so because of Maria I’m learning to be more honest about them. That’s why I’m telling you. I’m telling everybody because it’s so important to normalize that. Expectations nowadays are so freaking high that we cannot live up to them. It’s impossible. What we see on social media and on Instagram, like everybody living their perfect lives. It just gives you anxiety, because you know you won’t ever be that. It’s fucking hard. We have to make this a normal topic. A normal conversation. We’re doing it in our show. That’s amazing. Marcus [played by Benjamin Wadsworth] has depression. He loves to talk about it. He loves to tell people, because he feels like he his is strong being vulnerable. That’s awesome. I think that Maria is going to learn that along the way for sure.

On Getting Ready for Deadly Class

Well, Lana [Condor] is a badass. She is. I taped some boomerangs of her training yesterday with the stunt trainings. She trains with a bat. That’s very heavy. I need to get ready. I need to rehearse and practice.

The fans are so hard to manipulate. I mean, I’m used to the regular fans. They are like maybe made out of paper, and they’re super easy, but these are heavy, heavy fans. They have pointy ends that can actually hurt you. During the pilot, I hurt my hands. They were bleeding after practicing, and practicing, and practicing. They changed them. I am practicing with the fans constantly because it needs to feel smooth and natural. I also have a personal trainer that is helping me get strong. We also workout with the stunt trainers whenever we have time really, even between takes. They would come to us, and we would practice the scenes. How to make the punches look good for camera. It’s different, like in real life you would do something. For camera, you would do something completely different.

On the First Day on Set

It was horrible. My first day on set was doing the pilot and I was so scared, so, so scared. Talking about anxiety and stuff. I was so anxious. Everybody was so great and so talented. They knew exactly what they were doing, that I kept thinking, when are they going to find out that I’m a fake? When are they going to fire me? That was horrible. That was for the entire month of the pilot. Then, the show got picked up and they didn’t fire me. I feel way more comfortable and relaxed, and just happy, and grateful to be here. It was a challenge for me like, emotionally to just put myself together. Oh, my God. I’m doing this. I’m doing this. I was like drinking chamomile tea constantly, you know, trying to meditate and then doing breathwork. It was so hard for me. It was huge. It was everything I’d ever dreamed of. It was already here, like it was happening. It was hard, but it was great. Now everything is good.

On Why We Should Watch the Show

I think it’s very relatable. Of course, we don’t have, that we know of, academies for assassins or anything like that. We tackle really familiar themes. Love, betrayal, friendship, revenge. Things that we go through as human-beings. Even like, me, of course I’m not an assassin, but I can relate to every single one of the characters because they are written in such a human way. It’s so close to home, every single one of the characters, that you can’t help but feel for them and see yourself in them. I think that’s awesome. I think that’s something that people are really going to enjoy.

Oh, I feel like I’m super nerdy. They just asked us who’s the rule follower and everybody said me. Everybody said, it’s Maria, for sure. I would bring the comics to set. I would keep them in my trailer and I would read them over, and over again. They got us like an acting coach to prepare the scenes before shooting them. They were all like, oh, but I don’t work the weekends. I’m like, I will take your spot, like for sure. I will definitely take your spot.

5 Biggest Barriers to Black Mental Health During the Holidays