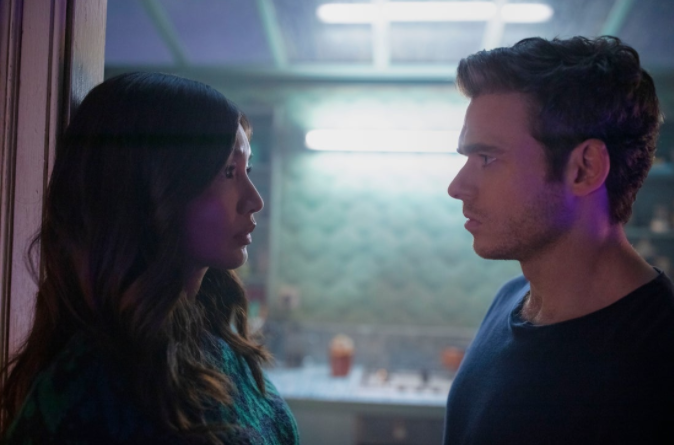 Forget what you know about the Marvel Cinematic Universe. Forget the way that the cinematography usually looks, how the pacing often flows, and how the characters typically develop. Not because they aren’t iconic, but because it’s time to make way for an entirely new MCU experience with Eternals.

Oscar-winning director Chloé Zhao (Nomadland) took the lead on the twenty-sixth film in the franchise and undoubtedly made it her own in some of the most brilliant ways possible. While fans have only arrived at the third installment of Phase Four, the MCU is already evolving.

Zhao’s perspective as the first woman of color to direct a Marvel movie shifts the cinematic universe into an enchanting chapter with a cast that embodies Black and Brown narratives, queerness, disability, mental health, and so much more, but isn’t just checking off boxes. The casting, plot, and production captures something more interpersonal than audiences have seen before.

Right away, viewers are introduced to a visually stunning world that centers around immortal aliens with superpowers that have fought a race of “evil” monsters known as the Deviants for over 7,000 years.

Created by the epic Celestials, the Eternals are torn between the weight of love and loyalty when it comes to their personal dreams and devotion to protecting humans. However, for these characters, there’s so much more than meets the eye. Both the cast and the beings they portray provide intersectional stories that never dare to reduce their narratives to being merely about powers.

It’s not every day that viewers meet a character like Phastos, who is Black, openly gay, magically tech-savvy, a loving partner, and a father. He’s not sporting a six-pack or depending on stereotypes to deserve a place at the table for this film. He’s unlike any character we’ve had in the entire franchise.

The same is true for the other cast members, such as Ridloff is the first deaf Afro-Latina Marvel hero, who catalyzes the incorporation of ASL in the movie. Jolie’s portrayal of Thena addresses the complexity of being a woman with mental-health struggles and the pressure to have a “normal” brain. Nanjiani embraces both humor and culture to make Kingo the life of the party, but the direction of his character isn’t crafted by a white person’s imagination of a person of color. It has a refreshing authenticity that makes him relatable yet special.

Lee and Hayek also have compelling presences throughout the movie. The popular Korean actor, also known as Ma Dong-seok offers a level of compassion and affection to his role as Gilgamesh that seems to speak to his own genuine character. Hayek’s pride in her Mexican heritage aligns effortlessly with Ajak’s desire to protect her family and nurture others. Of course, there’s no forgetting Chan’s stunning performance as Sersi. Her natural poise and grace compliment the transformative powers of her immortal being while challenging the narrative that Asian women can’t be both serene and fierce at the same time.

Too often, it’s the marginalized characters that become the villains or the poorly developed roles, and their work is doomed to fail. Not this time. This time, audiences get to celebrate diverse characters while simultaneously enjoying the customary Marvel charm.

While the movie lacks any distinctly large-scale action sequence, all of the fight scenes are satisfying for those who love fantasy and science-fiction battles. Each character’s unique abilities makes for aesthetically pleasing computer animation that doesn’t appear to be ridiculous or awkwardly coordinated. With CGI-heavy films, it’s all too common for the animation to be over the top and even sometimes appear comical. Yet, with Eternals, that’s simply not the case.

In fact, immediate reactions from those who attended the world premiere on October 18 in Los Angeles couldn’t stop applauding just how stellar the imagery is. The cinematography, masterfully crafted by Ben Davis (Guardians of the Galaxy) has gotten nonstop applause, and it’s no wonder why. The vividness of each color pops off the screen and makes not just for a “pretty” view, but an immersive one. From the look of the sky to the textures of the Deviants, there’s something that makes this the most engaging tale for the MCU.

While the plot of the film is a refreshing break after a long journey with the Avengers, it’s by no means unique — until the end.

Over the years, there have been anti-heroes (like Tony Stark) who struggle with what’s right and wrong. They have the intention to protect the ones they love, but only end up hurting them. So, the film’s theme of conflict and overall corruption isn’t vastly new.

With that said, this film winds down with a darker ending isn’t something Marvel audiences see every day (with the exception of End Game), especially with the classic, noble, “Superman-like” character of Ikaris who is supposedly a top leader within the bunch. Yet, Eternals went for it, and emotions ran high.

It’s interesting to see heroes who can just as easily forgive as they can betray but all with the intention to find meaning in a world that was never meant for them. The film speaks to what it means to be pawns in someone else’s game and be forced to find reasons to continue. Each character seems passionate about moving forward without the reigns of their Celestial creator, but the search for self-understanding proves to be more deadly for some than others.

That is, perhaps, what lies at the heart of the movie, what makes it resonate with so many walks of life. Forging our own paths, rather than letting them forge us is a common obstacle for many to either overcome or be overcome by.