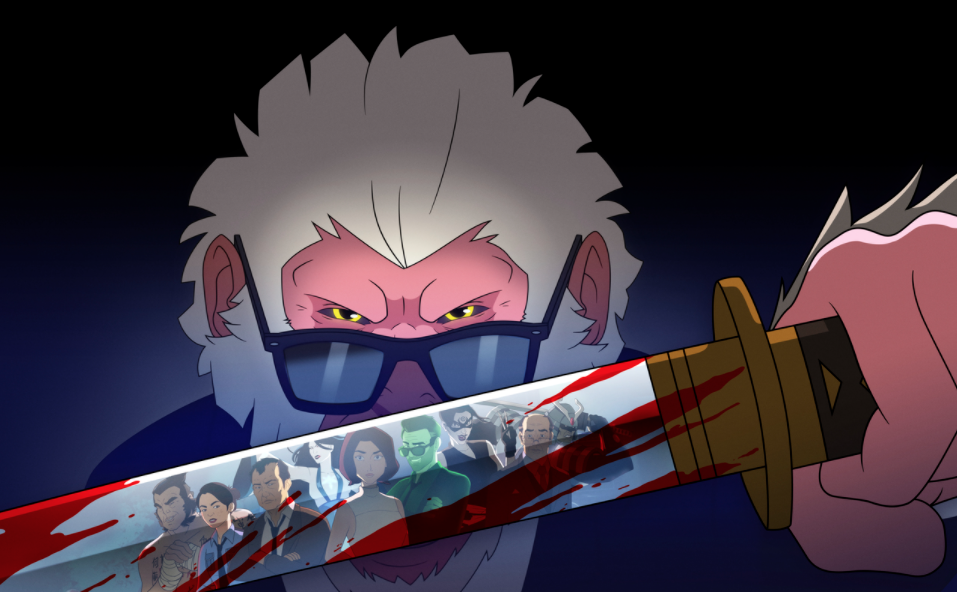 Marvel’s Hit-Monkey is based on the 2010 comic book by the same name. Bryce (voiced by Jason Sudeikis), an over-talkative globe-trotting assassin with substance abuse problems, takes a high-paying assignment in Japan. He ends up hiding out in the Japanese Alps and being taken in by a community of Japanese macaques (also known as snow monkeys). Bryce is found by a group of rival assassins, who kill Bryce and murder the tribe of macaques who cared for him, except the one renegade macaque Monkey (voiced by Fred Tatasciore). In a clever plot twist, Bryce’s ghost becomes attached to Monkey, and the duo embarks on a revenge journey that is a wildly entertaining ride.

Bryce is an expert American hitman with diarrhea of the mouth in life (and death). Monkey is a hothead with superior strength and a proclivity to rage. Together, Monkey and Bryce make the perfect Hit-Monkey.

Hit-Monkey was released as a Marvel comic in 2010. The comics begin with Hit-Monkey’s origin story plot, and future comics have Hit-Monkey duking it out with Deadpool and Spider-Man in three issues of the Deadpool comic book franchise.

Marvel’s Hit-Monkey is an unexpected delight. The animation is fantastic. Please be warned, this is adult animation. The violence is graphic and expertly presented. The fight choreography is wildly good. Marvel’s Hit-Monkey invites the audience into its world and invests in each character as if we were watching actual human beings on screen.

I didn’t expect to be as emotionally invested in this show as I was. I found myself totally rooting for Monkey and caring about him as he deals with the trauma of witnessing his entire community slaughtered by men with automatic weapons. Every character on screen is fully fleshed out with emotional complexity. The conflicts and challenges that Monkey and Bryce deal with as they murder people gives this series texture and makes the viewer think more about the violence that Monkey is inflicting and experiencing in real time. The writing is excellent. It’s not easy to be able to form believable characters with who the viewer connects immediately with real-life actors, so to be able to form this emotional connection with animated characters is mind-blowing.

The plot was unpredictable and just fun to experience as the story unfolds. The female characters in Marvel’s Hit-Monkey are spectacular. Akiko (voiced by Olivia Munn) is the campaign manager and niece of Shinji (voiced by George Takei). The main problem Monkey and Bryce work to solve in the series is figuring out the connection between the initial hit that brought Bryce to Japan and a tight election. The relationship between Akiko and Shinji adds a rich sense of righteousness to the corrupt political structure reflected in the world of animated Japan.

Marvel’s Hit-Monkey makes space for more than one female character to shine. Haruka (voiced by Ally Maki) is a police officer from a tiny town in the north who still holds her small-town values in this corrupt society. When Akiko and Haruka finally do meet up in the series, their relationship isn’t stereotypical and lends rich nuance to the story. The supporting characters are all interesting, scary, and super weird. The bad gals and guys are surprisingly scary.

Monkey doesn’t have any superpowers; he’s just a monkey in a black suit and RayBan Wayfarer sunglasses and various weapons of choice. The brilliance of his ability is the fact that he is our simian cousin. So if a monkey did actually pick up a gun and start shooting, he could actually shoot with his arms and legs. That possibility adds worlds of wonder for the fight choreography.

The animation is technically beautiful.  Realism is reflected particularly in the fight scenes, which were so good I had to rewind and watch again several times to honor the craft in the design, execution, and how it all came together to tell this wild, fun story.

Music is an additional character in the narrative. I slammed this unofficial Spotify “soundtrack” of Hit-Monkey (created by one of the artists who worked on the series) into my Spotify favorites immediately. I wonder if when the creators of Hit- Monkey had the idea for this comic, they were zoning out on video games and smoking weed.  Were they like, “Hey man, what if you know, there was like…this monkey right, and he somehow becomes a hit man?” Whatever the inspiration, this series is fantastic.

I was not expecting to be entertained by an animated series for adults. Monkey’s emotional struggle with inflicting and experiencing violence is one of the reasons why Marvel’s Hit-Monkey holds emotional depth and is more than just about the action. Even though Bryce’s non-stop talking grated on my nerves, it was there for a reason. In the end, all of that talking is a defense mechanism. In later episodes getting to know Bryce’s back story endears him to the audience, and by the last episode I was left wanting more. I give Marvel’s Hit-Monkey 5 out of 5 stars.

Marvel’s Hit-Monkey is a new Hulu Original series. You can binge-watch all 10 episodes on November 17, 2021.