When the original Mass Effect came out, I was really not into action role-playing games. For a long time I liked the one or two button games like Mario Brothers, Donkey Kong, and Pac-Man, then they started adding story games.  Lara Croft: Tomb Raider was one of the first games, I was mildly interested in, with this format.  This was one of those games where you sat alone for hours eating potato chips and wiping the grease on your jeans, as you tried to figure your way from level to level.  They could be very frustrating if your timing was a little off, like mine.

I spent one weekend playing Doom, dying over and over again on a level that was totally in the dark. You could hear breathing and growling, but couldn’t see my tormentors.  It was not a good idea to play that one at midnight!!!

The original Mass Effect was one of the really great story games, which was almost as much fun to watch as to play; and watch I did.  My brother’s Shepard was a red-headed girl fighting her way across the galaxy to save the universe from the Reapers. I followed this trend in the others, until I realized I could have an avatar that looked like me (if I had better control of my hair).  The Reapers were good villains and led to many days of destruction and discovery. 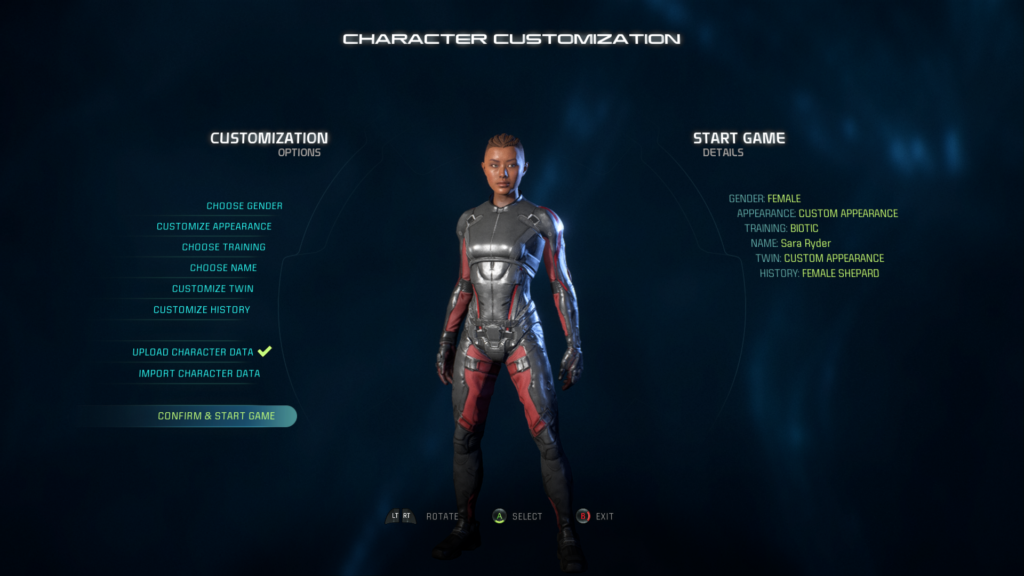 Now we have Mass Effect Andromeda (MEA). Like Dragon Age: Inquisition, this was Bioware’s attempt to center a more story-based game with an expanded open world concept.  With many planetary systems available, players have a lot to work with in the new Andromeda Galaxy.  The new game takes place after the end of the second game from the original trilogy. The premise is that private entities send colony arks from almost every major Milky Way race to Andromeda.

I know what you’ve heard, and it has been almost four months since the game came out. The clip provides you a look at what the game has to offer, so you can take a peek for yourself.  For me, I’ve gone through more than a third of the game and I can say it has its share of surprises.

It is true that the conversations will not win a literary award.  It’s not hard to find a glitch. I’m sure you didn’t miss Sara taking a drink out of a non-existent glass.  The graphics are about a year behind and that is being kind.  It’s not unusual for all characters to look shiny, and often the lighting hits so you can’t see the faces of the characters. For a story-based game that is a bit problematic. However, I do enjoy being able to see a black woman settling the galaxy.

Unfortunately for a story-based game, the story is also a problem.  The idea suggests that you have the expanse of the galaxy to explore, with months of downloadable content (DLC) to proffer once the game is out. [Editor’s Note: Unfortunately, the likelihood of single-player DLC seems extremely unlikely.]   This is true, but it seems more like a wall of yellow sticky short stories than a complicated web of stories that integrate into a battle between good and evil for the fate of the universe.

With MEA, just about any travel horror story, except losing your luggage and being stuck on a dying starship ala Stargate Universe, can be found here. The various problems of settling anything is the major driver moving the plot along. Settling or resettling planets that are already occupied can be challenging. Of course, this time we are supporting the natives in reclaiming their territory from a new evil called the Kett.

Of course, there is also the lost colony theme as three arks carrying the other Milky Way species are nowhere to be found when we get to Andromeda. There is a love story, but at this point, my character is playing all the angles, no telling what part of the human, alien, male, or female lover spectrum she will come out on. In the past, the love story was sort of a great surprise.  With this one, I see that some have high expectations.  The love story has never been my motivation for purchasing a game, but hey to each their own.  Regardless, this is another avenue that is available amongst all the myriad others. 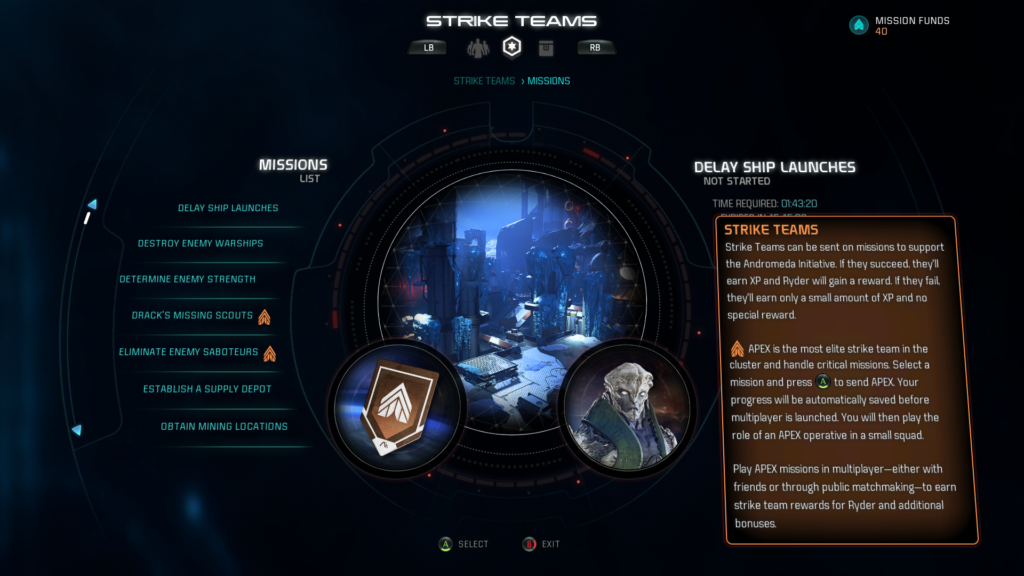 The multiplayer games are intense.  There is a goal for each mission, which can support story mode objectives. Each mission has several waves, generally starting with a survival wave, moving into the goal, and always ending with an extraction wave back to the space station.   This is not your normal first person shooter (FPS).

Also, leveling up can be time consuming.  However, it is not the focus and serves as a fun break from the story mode. As I am still playing some of the other FPSs, switching back and forth can be challenging as some of the keys are reassigned, so be sure to go in and reassign to your comfort key arrangement.  Be mindful that there are only four of you, and the opponents are very aggressive, so playing as a team is mandatory and camping is ill-advised.  However, the effective use of cover is a must.  Regardless of the mission, the number of locations can make the game repetitive.  Also, leveling up can be

This is not your normal first person shooter (FPS).  As I am still playing some of the other FPSes, switching back and forth can be challenging as some of the keys are reassigned, so be sure to go in and reassign to your comfort key arrangement.

Be mindful that there are only four of you, and the opponents are very aggressive, so playing as a team is mandatory and camping is ill-advised.  However, the effective use of cover is a must.  Regardless of the mission, the number of locations can make the game repetitive.  Also, leveling up can be time-consuming.  However, multiplayer is not the focus and serves as a fun break from the story mode. 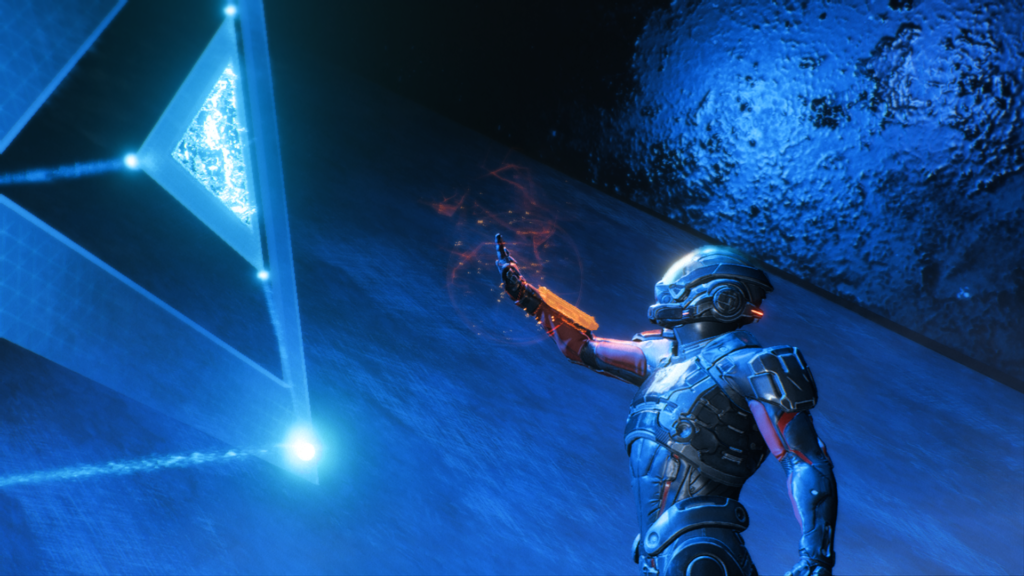 Your transportation across the galaxy is the Tempest.  There are several systems but don’t worry, you don’t have to scan each planet in its entirety to find minerals.  One of the new features is once you enter the system, the scanners will point out any anomalies.  The anomalies can range from mineral rich asteroids to satellites, to destroyed ships, or radiation trails from a damaged ship.  This way you won’t spend twenty minutes scanning planets for iridium.

On the planet, terraforming to support long term colonization is the ultimate goal, with the enemy kett forces opposing you at every turn.   On habitable planets, there are several monoliths guarded by Remnant guard tech you have to fight. The monoliths need to be activated to support terraforming.  The level of activity to activate them vary from long journeys underground, to solving Sudoku-like puzzles. 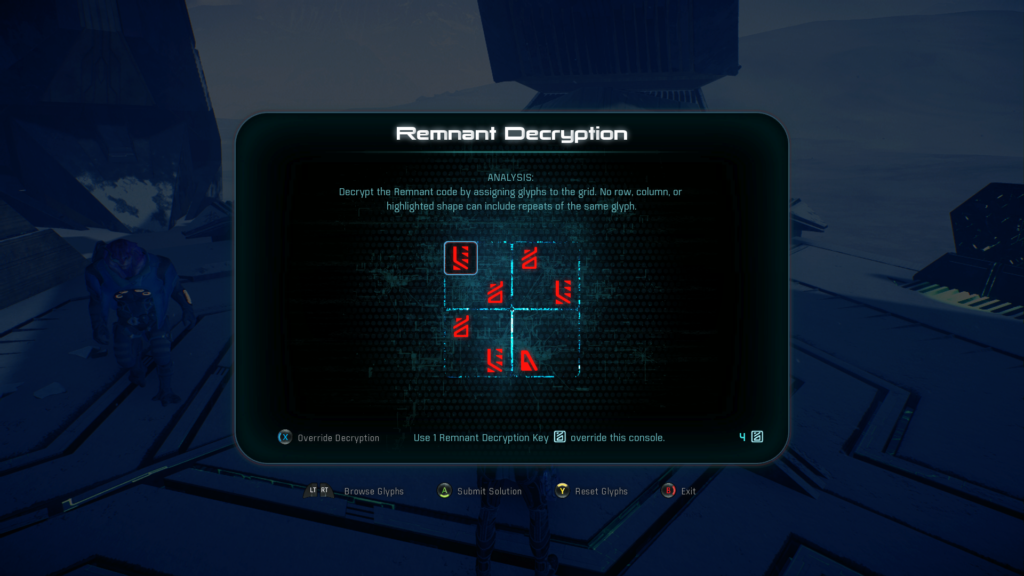 All in all, the quandary is whether MEA is worth the price tag.  They should get credit as they have spent time patching where they can.  I will say the game price is not as much now as it was when it was released, and the game does have its moments.   The question for you is should you pay full price for a game that is still trying to find its way.  I can’t answer that for you, but I do recommend that you take advantage of the free play weekends, and/or game rental services to help with your choice.  I, however, will be out there, slipping down cliffs, romancing crewmates, and shooting kett forces.  Pathfinder out.