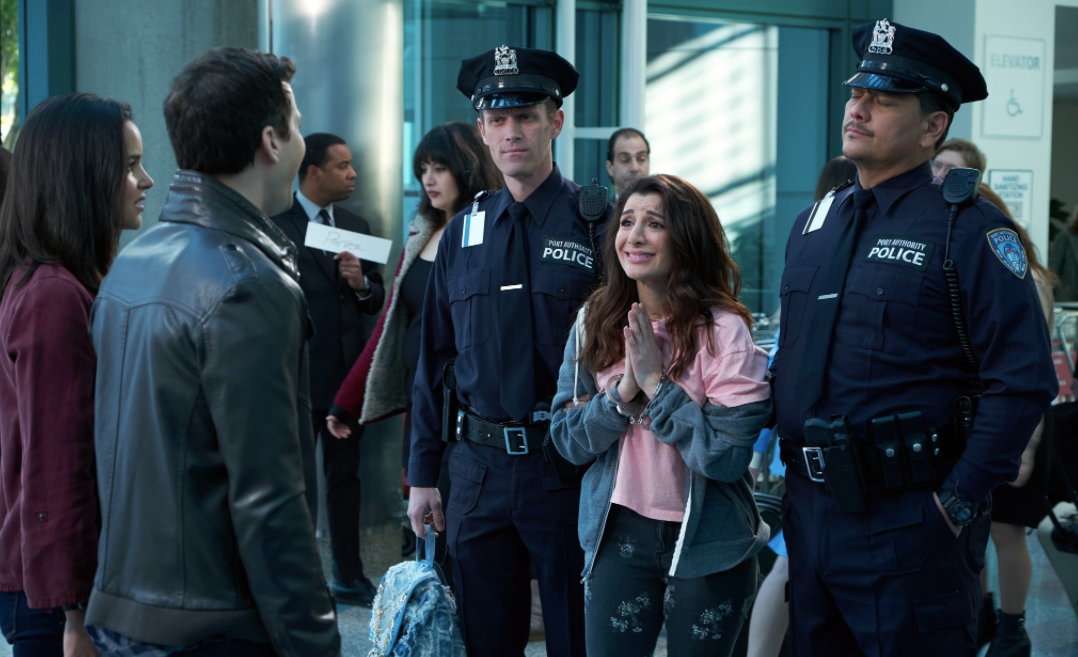 We get to meet Jake’s sister! And witness the matchmaking genius that is Gina Linetti.

Since Papa was a rolling stone or something of that nature, Jake has been reaching out to all the siblings he’s never known. Only one has interest in meeting him — Kate. Jake is super excited and nervous, but when he picks her up at the airport, he starts to have second thoughts. Probably because when he and Amy meet Kate she’s being escorted by security guards.

Later the three go to dinner and Jake and Kate begin to bond over their father’s transgressions. Unfortunately, things take a sharp (like glass) left turn and Jake and Amy realize Kate is a con artist. Despite the fact that she had sex with a human statue on their couch, Jake and Amy let Kate stay with the hope/assumption that she’ll leave soon.

That’s not the case.

Kate is having so much fun in NYC she wants to stay FOREVER, and considering she’s been through a lot (her boyfriend left her, her mom died, her dad’s a whore) I can’t really blame her. But for obvious reasons, her brother and his fiance aren’t thrilled. The two assume she left because of her bad breakup (they don’t know about the mom bit) and pay her boyfriend Kurt to apologize and beg her to come back to Texas. It seems to be going swimmingly until the human statue comes back looking for his wallet.

It becomes clear to Kurt that his ex cheated on him and they get into a huge fight. Kurt reveals that Jake is the one who asked him to come to New York in the first place. Kate is super offended (rightfully so) and she leaves.

Jake realizes that he wanted to get rid of Kate because she’s a hot mess like their dad, but by only hanging out with her under his terms. He was also acting like their dad. He goes to the airport to apologize and they agree to take their relationship slow.

Gina finds out that Rosa is single and BEGS Rosa to let her set her up with one of her friends. Rosa refuses because in the past all the guys Gina has set her up with have been duds. Gina apologizes but counter-argues that all men are trash, so this will be different because her female friends are awesome. Rosa reluctantly agrees.

Gina meets Rosa at the bar with her friend, who is very obviously not Rosa’s type. She comes in the next day to lambast Gina for her terrible matchmaking skills but instead, Gina reveals that her plan worked perfectly. She points out that Rosa is wearing the same clothes as last night (shout out to Gina’s detective skills) so she clearly had a good time with someone and that someone is the bartender. She tells Rosa that she was setting her up with the bartender the entire time, but she had to be sneaky about it because if she were to outright set them up, Rosa would be too judgmental.

Gina setting up Rosa with her friend was my favorite part, despite the predictability. I would cherish the idea of Jake having other people in his family who truly understand what he’s been through it I weren’t distracted by the fact that Nasim Pedrad being on Brooklyn 99 conflicts with The New Girl crossover.

Jake’s realization about himself in relation to his dad was moving and exciting because of character growth.

I wonder if Kate will be at Amy and Jake’s wedding?

Kate and Kurt seem like Florida people, not Texans