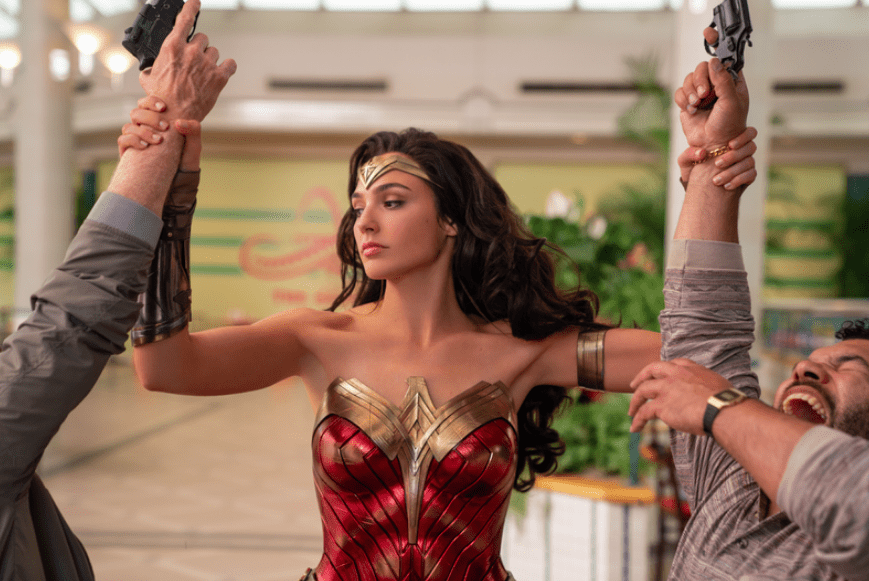 When I saw Gal Gadot break through walls in her most recent blockbuster film, Wonder Woman, I knew at that moment female superhero movies would forever be changed.

When I was younger, I would pretend to be Wonder Woman. My family did not have a lot of money so I would go around with a cap and pretend it was a tiara, put my sisters’ bracelets around my arms, and tie together shoe strings and pretend it was Wonder Woman’s Lasso of Truth. I would go around and tie my sisters and cousins up while in a bellicose tone bellowing that they tell me the truth. So, when an opportunity opened up to meet my superhero legend Wonder Woman, I jumped at the opportunity.

I met Gal Gadot at the London Warner Bros. studio where we sat down to discuss her latest film Wonder Woman 1984. The room was dimly lit and smoke filled, and cacophonous noise filled the empty space; Gal whispered to me that this was a perfect setting for conducting an interview.

Gadot is a gorgeous and talented Israeli actress who always delivers her lines with precision and accuracy. She transforms whatever role she has into a work of art. Gadot not only understands the mind of the character she plays, but also discovers what motivates them and what resides in the darkest parts of their minds in order to deliver a performance that is unmatched. If she plays a superhero, she explores the ways in which her character understands, develops, and communicates. Gadot always shines when it’s her turn to reveal her scenes, and she always has an amazing infinity-luster, mirror-like shine. Superhero fan goers will soon see the astonishing Gadot in another amazing film, Wonder Woman 1984.

Her performances as Shank in Ralph Breaks the Internet, Wonder Woman in Justice League, and Wonder Woman in Batman v Superman: Dawn of Justice have only helped to solidify Gadot as a multi-talented actress. So, when it comes to exploring and becoming Wonder Woman, it is no wonder why Gadot makes perfect sense. In an intimate interview with Gadot, we discussed her character, her character’s close relationship with Steve Trevor, a little on female empowerment, and even a little bit about the supervillainess character Cheetah. It made for a perfect night interview.

We dove right into the role she plays and the dynamic between her and her co-star hottie, Chris Pine. Gadot explains the relationship that is deepened with the new film. “Steve and Diana have a really special dynamic that was not fully explored in the previous movie. We just met and built a relationship; now we get an opportunity to continue where we stopped last.” The dynamic changes in a positive way, but the scars still stay with them even after all those years. “My character carried the great loss of him all those years — a loss that is hard for any superhero to carry. Having someone you loved so much, after so many years, and finally getting to be with him again is great!” Diana is much more mature now. She is now coming from the perspective of a mature woman, rather than a young woman who falls in love.

Gadot goes more in depth about her titular character and reveals the dark side to her. Gadot tells us in a blue tone that Diana Prince “does not really want to make close connections with anyone because she knows that she will have to hurt them. She will have to disappear one day, or she will lose them because they will grow old. After the loss of Steve and the entire team, she is in a place where she can be happy.” Diana understands that living in humanity’s world means losing those close to you. The character is not complete. Gadot continues, “She is fairly lonely, but she made the choice to do that. She does good to the world whenever she is needed. She still has issues.” That superheroes are capable of being hurt is not something that this superhero is immune to. Her character feels deeply when a loss happens.

In the close quarter interview, Gadot expressed to me her love for the villains of this movie. With good reason, one might add; the main villains are not the blatantly overused villains or common archetypes that many viewers have come to expect. They are instead sympathetic and charismatic villains who viewers can come to care deeply about. The filmmakers have really managed to create villains that are real. Gadot states, “We can see ourselves in them. They aren’t bad people, but they just didn’t make the right choice at the right time.” We get a real sense of the fragility of each character in this film.

Examining her fiercest rival, Kristen Wiig’s character Barbara Minerva, later known as Cheetah, Gadot tells us exactly why she is so enthralled with this villain. “She is so fierce, sexy, funny, smart, and insecure. She is nerdy, and full of heart.” She doesn’t see her accomplishments as enough or even worth it. She looks at Diana and admires her beauty, but ironically enough Diana also admires Minerva for intelligence as well as beauty. These two powerful women always feel incomplete and less than despite the obvious talent and prepossessing beauty they both hold.

A preview behind the scenes of the Wonder Woman 1984 reveals that Diana Prince feels right at home in the ’80s. Prince has a style that is all her own; while she adapts well to the era, she always keeps an elegance about her. The idea of elegance and female empowerment go hand-in-hand and is shown at the forefront of Wonder Woman. This bleeds into another great aspect of Gadot, and that is how honest she is.

Gadot candidly addresses how she feels when preforming. She explains, “When I’m shooting a scene, I do not think, ‘Wow, I have to be this or that,’ but I think that overall this character does carry this by default. It’s not something I think about while I work, but it is always there.” While it is not something that is actively thought about, it is at the core of the Wonder Woman character, an honest and true hero.

Gadot also spoke as to what the era had that was unpleasant — mostly, the price people were willing to pay in order to achieve what they want. Sometimes the price was not worth it.

Wonder Woman is at the heart of what women can be: strong, smart, beautiful, nerdy, fierce, venerable, and sexy. Women can be all these and more if they dedicate themselves to grand endeavors. Wonder Woman is also a signal of hope and change. I cannot wait to see Gal Gadot’s performance in Wonder Woman 1984. She will always be, to this poor boy whose family could not afford to buy him actual Wonder Woman gear, a beacon of empowerment.