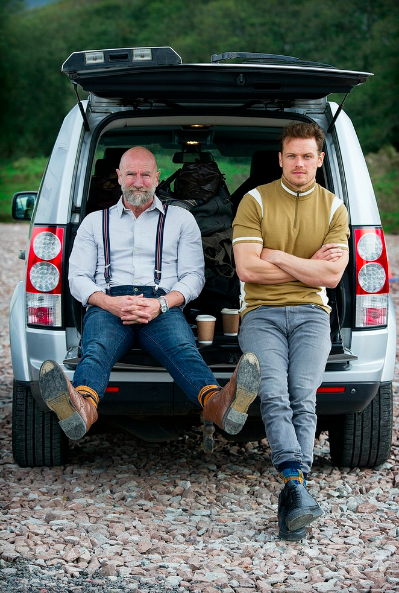 Amid the wasteland that is Droughtlander and a global pandemic, there is no greater joy than escapism. Enter Men in Kilts: A Roadtrip with Sam and Graham, a welcome adventure across the Scottish countryside led by Outlander fan favorites, Sam Heughan and Graham McTavish. The last time we saw these two, Jamie Fraser (Sam) was driving a dagger through the heart of Dougal Mackenzie (Graham). It appears their onscreen rivalry is a thing of the past as the duo explore the wonders of their native Scotland — and we get to come along for a ride.

“Scotland, it’s an ancient land with incredible history and tradition… It’s a land of delicious bounty and some of the warmest, most welcoming people in the world,” the opening narration of the premiere, aptly titled Food and Drink, draws us in during a time when travel is virtually obsolete. As they set out on their first leg of the journey, Sam and Graham hilariously bless their van before taking a trip of a lifetime.

The first stop is The Kitchin, a world-renowned restaurant located in the capital of Edinburgh. While haggis may be the national dish, Scotland has so much more to offer. Chef and owner Tom Kitchin prepares a meal for the twosome that makes your mouth water: scallops baked in the shell, succulent lobster, and braised lamb. You know the food slaps when Sam reaches over and takes a forkful of Graham’s meal, much to Graham’s chagrin. Chef Tom notes, Scotland’s seafood is not as celebrated as it should be. There is no doubt that after watching his delicious dishes, viewers will be clamoring to visit his establishment, post-pandemic of course.

Next, our boys leave the big city and head for the coast. Sam is in the driver’s seat doing what he does best — annoying Graham. One of the best parts of the series is the witty banter between the two, akin to watching your brother and grumpy uncle argue about directions. They finally arrive in Pittenweem, an active seaside port that produces some of the world’s best seafood. Sam and Graham join Captain Kirk Doig aboard his sea vessel, Charisma. The two are dressed in yellow rubber overalls, giving Gordon’s Fisherman a run for his money. The catch of the day is lobster and langoustine. Sam tells the sea creatures he is excited to try them out for dinner. “You don’t have to say it to them. You could have kept that quiet,” Graham grunts in retort.

Back at the shore, the duo are greeted by world-famous Chef Tony Singh. A few lucky fans and this journalist will recognize Chef Tony from the “Cook Along and Premiere” where viewers were able to make traditional Scottish Honey and Whisky Fool along with delectable Shortbread Hearts. Chef Tony was ever so patient with Sam, who may look good in an apron but is not the best in the kitchen. Graham, for his part, was an observant virtual sous chef.

On the shores of the Scottish seaside, Chef Tony prepares Sam and Graham’s catch of the day. The unique blend of Indian and Scottish cuisine creates a sumptuous dish of garlic and garam masala lobster and langoustine topped with seaweed chili butter. While Sam and Graham cannot bear to see Chef Tony send the shellfish to “Valhalla,” they certainly have no qualms enjoying their meal. Sam and Graham do a happy dance, a tell-tale sign of amazing food.

Full and happy, our resident ginger and silver fox head to Islay, home of the best whiskey in all the world. Sam tells us that the main ingredient in whiskey is malted barley, which is fermented in distilling tanks. The alcohol is then aged in barrels for years before it is ready for consumption. But before any of this happens, the barley must be dried. How is barley dried, you ask? Giant peat furnaces are lit, the smoke engulfs the chamber, and the barley is dried. Who gets to dig out the peat for the furnaces on this episode? Why, it’s our favorite road warriors, Sam and Graham. After a long drive, nothing lifts the spirits more than digging up decomposed vegetation.

Sam and Graham are put to work by Laphroaig Distillery Manager John Campbell and resident malt master Arthur Holyoke. After a few minutes of Sam pushing all of Graham’s buttons, the two escape the peat bog and take a scenic bike ride back to the distillery across the small, lushly green island. For their small labors, Sam and Graham are rewarded with a romp in the barley. Like two happy children, they gleefully dive and roll into the golden grains, the happiest we have seen them all episode.

We end the episode with Sam and Graham enjoying 26-year-old whiskey, lounging near the rocky seaside. One can only feel happy and content, watching these two together again. There is no doubt this roadtrip will be the much-needed escape that viewers have been yearning for.

The journey isn’t over yet; it’s only the beginning. Sam and Graham will be our tour guides though the Scotland’s beautiful landscape, its music, its sports, and its people. Oh, and Sam will be driving the whole ride as Graham is much more content to “moan and complain” as a passenger. One can only imagine how that will go.

Be sure to tune in every Sunday starting February 14 at 9:00 p.m. ET only Starz.