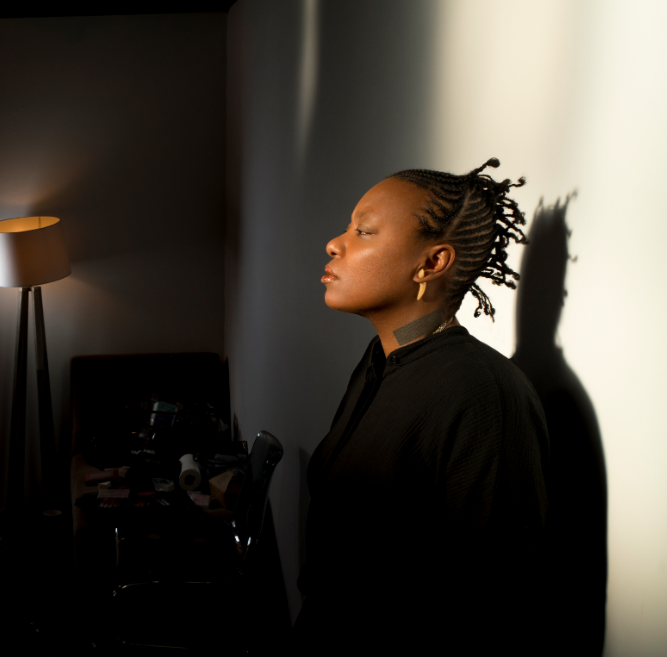 Meshell Ndegeocello is an artist, activist, mother, composer, and Omega level bass player who has inspired millions many times over. Whether you dissect her lyrics or listen to her many insightful interviews, it is clear that Meshell seeks truth. Whether that truth is in spoken word, song, or pure emotion, Meshell’s existence is closely tied to expression and artistry. One might think being that driven would ensure she’s not a nerd, but in our interview Meshell proved that being a nerd has many forms.

While discussing her recent Producer’s Lounge roundtable talk at the Vancouver International Film Festival with her, BGN had an opportunity to dig a little deeper. Knowing that we’re all affected by today’s social climate and politics, Meshell had some superb insight into navigating it all as a parent and as someone just trying to maintain their own mental balance. She also discussed a recent post of hers on Instagram regarding Mitch McConnell. And, we couldn’t let her off the hook without revealing what Prince albums she’d like to see a deluxe version of.

So now, let’s explore the astral plane with Meshell Ndegeocello.

We’ve noticed in a few other recent interviews, like one with the New York Times, where you were discussing a lot of the activism that has been a part of your career — everything from the Lilith Fair back in the 1990s to how today’s climate is forcing all of us to do a lot of internal reflection, as well as presented a new challenge to parenting. How are you handling your conversations with your sons? The education system has a lot of gaps.

A lot of gaps in there. In the last few days, and also as someone who did not excel in that experience of education, I think I’ve done . . . okay. I think it’s so important. These young people now crave attention — just a little bit of your time, not to tell them things, but maybe to listen to them.

I have never seen a generation of young people so in need of interaction with different kinds of people — someone to give them an hour of just, “I am here to listen to you.” That’s what I’m really trying to do with my son now, even more so than fill in the gaps. I’m just like, “I want you to know at the end of the day, it’s those moments where you’re alone with yourself, when doubt comes over you, that I need you to keep it together because life that life is going to be full of that.”

These things come and go. Find something that can keep your hands and your mind busy. I know that sounds old-fashioned. Try to live a life that you won’t [regret] when you rewind it in your mind, which is just natural. The images that you’ve created — make a good movie for yourself. In the Hindu philosophy, they see life as a drama. We are all in this grand play. We change costumes all the time, [becoming] different characters. You’re all these different characters. Sometimes you’re the good guy. Sometimes you’re the bad guy, or you’re the extra and you’re meaningless. It’s how you play through all this and get to the end and make sure you have a fantastic curtain call. You know?

I saw on social media, you had some Biblically themed statements for Senator Mitch McConnell. You said, “I smite you.” Would you like to elaborate on why you think he should be smitten?

Oh, I love words. I also have that serious Christian background. That was the only thing I could think. That’s what I felt. I was just like, “Wow, the gall, the unmitigated gall of him.” Everyone’s really excited that the leader of our country has fallen ill. That made me feel really funny. I know I just wouldn’t feel right [feeling] that, even with Mitch McConnell. I definitely was like, “Oh, if there is a creative force that is in control of this grand drama, please smite that, too.” I would love to sit and talk with him, which I’ve tried.

I ran into Rand Paul on a train one time from New York to DC and I was really into some of the things on his platform. And I went to say, “Hey, I want to ask you a few things.” And he was so rude and so dismissive! I would like to meet all of them, and, somehow just ask them a couple of questions. Like, “How do you sleep at night? Is this working for you? You’re so pro-life yet, there are hundreds of thousands of young people who don’t look like you with all that time [in their life]. You put [that effort] into unborn life, who uses an hour of your time, but you don’t think about that.”

I wonder where we are. It’s definitely time for people of color to make new narratives. That’s why I really listen to James Baldwin. Once you realize you are a kidnapped pagan, the only reason you participate in American’s religion is through brutality. You start to realize. You need to rethink these dreams. Time for us to dream some new dreams. These dreams have been manufactured for us through media and music and the education system. I just am really excited for the people who see this moment in time with the virus to disconnect and reacquaint themselves with their children and themselves and realize like, okay, yeah, your life plays out on social media, but your life needs to play out for you, your ancestors.

We need to go back to thinking of the next seven generations. When Native Americans are the only other people more hated than people of color in this country because they have something to offer us, we need to rethink the stories we’re telling each other, the information we’re letting out to each other. That’s the other thing. I’m so afraid my son is going to experience something on social media or searching the worldwide web that I can’t let make him unseat. You know, you can’t unsee that. It’s a very powerful medium, you know.

We saw something that said that you were going to be leaving Instagram. So how has social media affected you both as a person and as an artist?

Yeah. I plan to do that. Like, that’s going to be my Christmas present. I think. You know, the only thing is, it helps me advertise the Baldwin Project and other things I’m doing. I just have to figure out how to continue to do that. And it’s really hard to figure out.

[Staying off social media] saves your brain, saves your mind from — what do you call that? — coveting. Saves you from that envy. It saves you from that feeling of, am I doing enough? Am I not enough? Let me just chime in in meaningless ways on meaningless topics. But, you know, it’s really been a lesson for me. I found myself treating it like a friend, and that made me nervous.

So now for the main question: What is the nerdiest thing you’ve ever done?

Oh, let me think, because there’s a lot. I used to love this movie called Altered States with William Hurt. He traveled through time within his mind by being in an observation tank. So I go to those tanks that are filled with salt water. So you float and you can’t hear anything. You cannot say anything. I do an hour at a time. And I can’t explain to you, but the enemy of the self is your own mind. Those first five minutes of being just left alone with your own thoughts will really show you about yourself. I think that’s what I’m trying to let go of.

You know, the things I’ve done, no one walks on water. That’s the other thing that social media has led us to believe. There are some people who have walked on water, but I know I’ve fallen short in many ways. I have done things that I wish I hadn’t done. It’s not that I have shame or regret. It’s just I’m human. In that tank, when your mind starts to scroll through things that seem to haunt you, or you want to connect with your ancestors (if you are into that realm), or if you want to be really centered in your prayer to whoever it is, you must be able to sit with yourself, not move, and just watch your mind do its thing. It’s astonishing.

All right. Because I’m trying to astral travel. That’s all I’m saying.

Ah! Astral travel. She’s in. Nerd card clicked. Next question: What Prince album would you like to see receive the next deluxe edition treatment?

Ooh, For You the very first one. Then after that, I’m really a big fan of — a lot of people criticize this record — but it is The Symbol Record. I love that album, too. Those would be my two, because there is something in them that is unexplainable. I know the other ones were like mega hits, but the intro of For You — matter of fact, as soon as I hang up, I’m gonna play it for myself. “The Morning Papers” is an amazing track. It’s just a beautiful composition.

Last question. If you could be any superhero or heroine, who would you be?

Now, if I could be anybody, I think I’d want to be George Washington Carver. He said, “Greet me in the morning and you shall find me early,” which is where his inventions and the spirit came from. I never forget the book I had about his life. To me, that human being with all that he experienced — he is my superhero.

With Meshell, it is clear that she is on a journey not just as a musician, but as a person.  Her heroes and mentors were originators, and her clear knowledge of self supports activism that is in line with her talent.  Interestingly enough that still leaves room for her search for her perfect self, which may take her to the upside-down as she travels through the universe. But BGN is sure she will come out okay, with a rhythmic tenor that leads her tune and takes her to what’s next.

Poet, author, parent, and freelance music and video game critic, B.J. Brown is a talented blerd writer hoping to become a Mechwarrior when he grows up. Founder of the Heed Magazine, Geekswagg Podcast, and a regular contributor to ForAllNerds.com, Shaded Pixels Podcast, and more, BJ hopes to make his “Bunneh3000” gamertag the gateway drug to geekdom! He’s currently sending resumes to Battlestar Galactica citing his love of engineering and Bear McCreary music as his strongpoints!