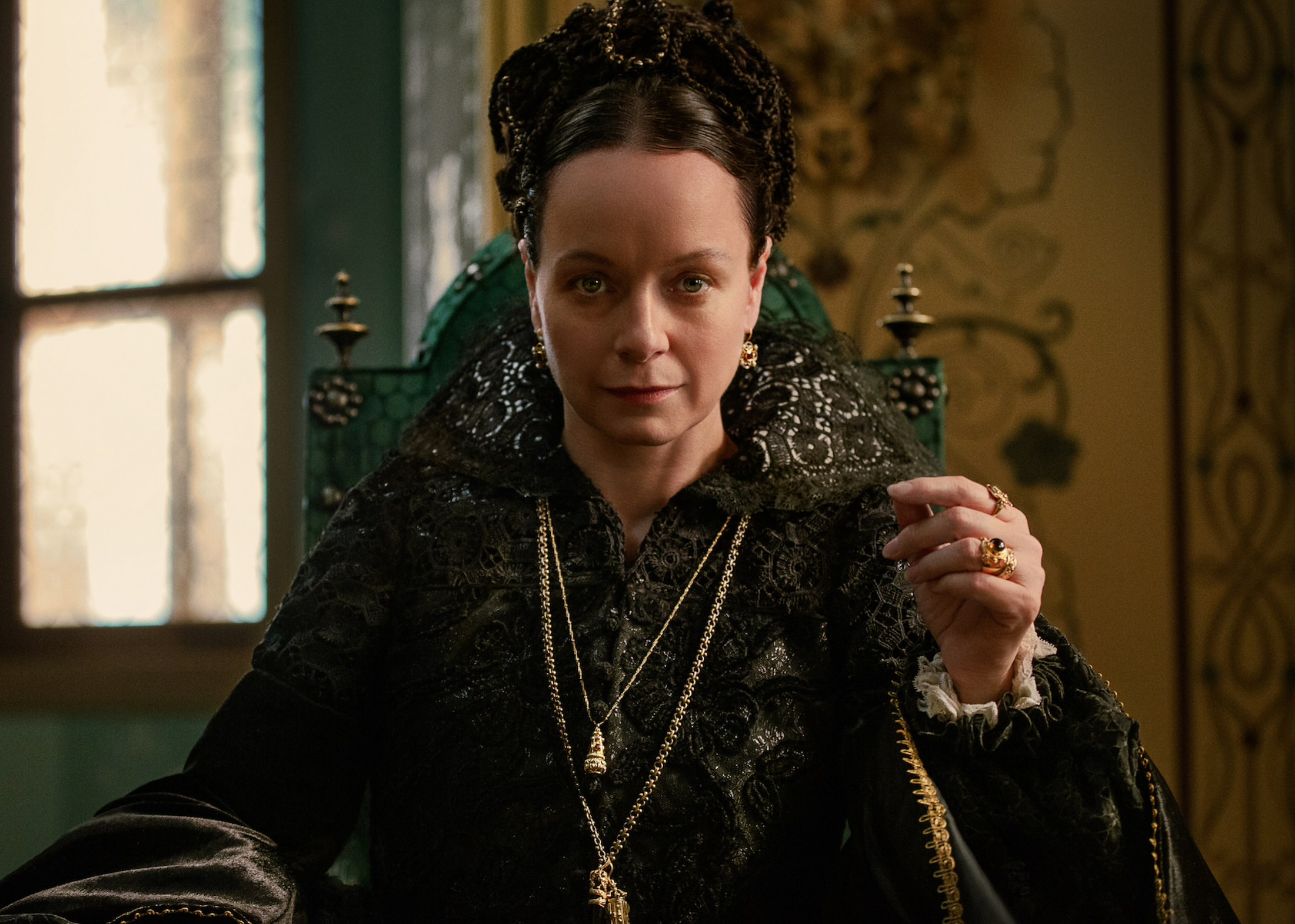 You are missing out if you don’t have a Starz subscription. From P-Valley to American Gods, Starz continuously breaks the mold in prestige television. The Serpent Queen is an enticingly vicious costume drama about Catherine de Medici’s (Samantha Morton, Harlots) accession to the throne. The series takes place in 16th century France. It begins with Queen Catherine alleviating her boredom by organizing her son’s upcoming nuptials by recounting her rise to power to her new maid Rahima (Sennia Nanua, The Girl with All the Gifts).

Rahima is an outsider called “It” by the other servants. Perhaps Catherine sees something in Rahima and takes the young woman under her wing as a mentor. While on a walk through her vast gardens, Queen Catherine confides: “When you find life conspiring against you, you must find a way to change it to your favor, no matter what the cost. You must be willing to make sacrifices, cross lines that you never thought possible.” There’s always a price for power, and The Serpent Queen does not disappoint. The chemistry between Samantha Morton and Sennia Nanua is fantastic.

I love stories revealing intergenerational relationships among women beyond the family dynamic. Writer and executive producer Justin Haythe (writer, Revolutionary Road) and his team have crafted a sharp script with a punk rock feel that gives the series a wildly engaging contemporary feel. The structure is clear and allows this costume drama narrative to unfold effortlessly.

As Catherine’s older cousin Diane De Poitiers (Ludivine Sagnier, Lupin) points out that Catherine is lucky, Henry is young. Her husband was three times her age when she married at fourteen. The first three episodes of The Serpent Queen vividly reveal the role of marriage for the noble class during the Renaissance and the lack of autonomy women had for centuries. With the current overturning of Roe, I couldn’t help but worry for our future as I viewed this aspect of the series from a frightening new perspective.

The Serpent Queen does an outstanding job at reflecting how, throughout time, women have found ways around patriarchal social structures to gain and wield power, agency, and, dare I say, freedom beyond their second-class status. Catherine de Medici is a prime example. But she wouldn’t have been able to develop her survival skills if it weren’t for her nemesis, cousin Diane.

Ludivine Sagnier’s Diane De Poitiers may be my favorite character in this series. Cousin Diane is a widow and has soundly planted herself in court by connecting herself to a much younger man, and it is a joy to behold. Ludivine Sagnier has the best takes and works those costumes like the diva she is. Diane De Poitiers creates havoc in Catherine’s life from the time she arrives at court, and the relationship ends up being long-term.

Sagnier plays cousin Diane throughout the series. Both young and older, Catherine is dealing with a Cousin who is much older but never seems to age. It’s a brilliant effect. We also see the 16th-century beauty rituals Diane De Poitiers inflicts upon herself to maintain status and power through beauty. Her storyline truly is magnificent.

As Catherine de Medici, Samantha Morton is supreme. The first five episodes are extended flashbacks with shorter cuts of the present perspective (about 20 years later) woven throughout the narrative. The storyline in Catherine’s current older perspective has just as much suspense and conflict as in her past.

Morton is an actor I’ve always loved to watch. I remember seeing Morton as the precog Agatha Lively in Minority Report at the theater. Her performance was so fascinating she left a lifelong impression. When I saw Samantha Morton was cast in The Walking Dead, I had to watch a couple of episodes just to see her work. Samantha Morton is one of those actors who shines in every role she plays as she simultaneously disappears into the role.

Every moment is real, nothing feels contrived, and there’s something in her eye that can scare you right through the screen. Then, another moment, she’s breaking your heart. In The Serpent Queen, I love watching her work the situations. I’d never heard about the history of this monarch, so I witnessed the first five episodes with fresh eyes and was surprised. I love the unpredictable and brutal nature of the political scheming of this series. What people will do in the quest for power is fascinating.

The Serpent Queen’s entire creative team, from costume and hair to lighting, sound, and set, all flow together effortlessly, adding to the sharp writing and excellent acting. During the pandemic, I watched The White Queen, not expecting anything, and was completely drawn in. I devoured The White Princess and The Spanish Princess immediately afterward, and The Serpent Queen raises an already high barre of period soap opera political drama that feels good to consume right now. You will be entertained.

The Serpent Queen premiered on Starz on September 11, 2022, with new episodes airing Sundays.