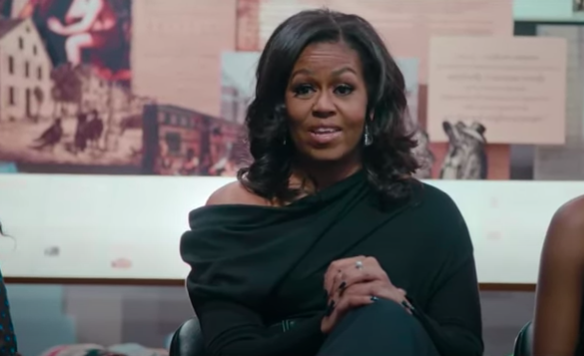 According to Indiewire, Netflix and Higher Ground Productions announced today the forthcoming release of Becoming, a feature-length documentary following the First Lady around the country as she met Americans on tour for her bestselling memoir, also titled “Becoming.”

Released in 2018, “Becoming” sold 1.4 million copies in its first week, and became the best-selling book in the U.S. for the year just 15 days after its debut. Netflix has also released a first look at the film, which shows Obama sitting down with a group of young African-American women and sharing her experience.

In early May of 2018, the Obamas secured a deal with Netflix to produce both movies and TV series for the popular internet streaming platform. The former President of the United States and First Lady began working on scripted and non-scripted shows as well as docuseries, documentaries, and features in a multi-year deal.

Michelle and Barack Obama won an Oscar for their documentary American Factory this past year. It was executive produced by Higher Ground’s Priya Swaminathan and Tonia Davis, and produced by Lauren Cioffi.

In a statement below released to Indewire, here is what Michelle Obama had to say about the news:

“Those months I spent traveling — meeting and connecting with people in cities across the globe — drove home the idea that what we share in common is deep and real and can’t be messed with. In groups large and small, young and old, unique and united, we came together and shared stories, filling those spaces with our joys, worries, and dreams. We processed the past and imagined a better future. In talking about the idea of ‘becoming,’ many of us dared to say our hopes out loud.

I treasure the memories and that sense of connection now more than ever, as we struggle together to weather this pandemic, as we care for our loved ones, tend to our communities, and try to keep up with work and school while coping with huge amounts of loss, confusion, and uncertainty.”

She went on to praise Becoming director Nadia Hallgren, a prolific documentary cinematographer who is making her feature directorial debut with the project.

“She’s a rare talent,” wrote the First Lady. “Someone whose intelligence and compassion for others comes through in every frame she shoots. Most importantly, she understands the meaning of community, the power of community, and her work is magically able to depict it.”

“My focus has always been the craft of cinema vérité. To make this film feel intimate I knew I had to get close,” Hallgren wrote in a statement. “I filmed in tight, private spaces in a way that required the smallest possible footprint.”

Netflix will release Becoming globally on May 6.