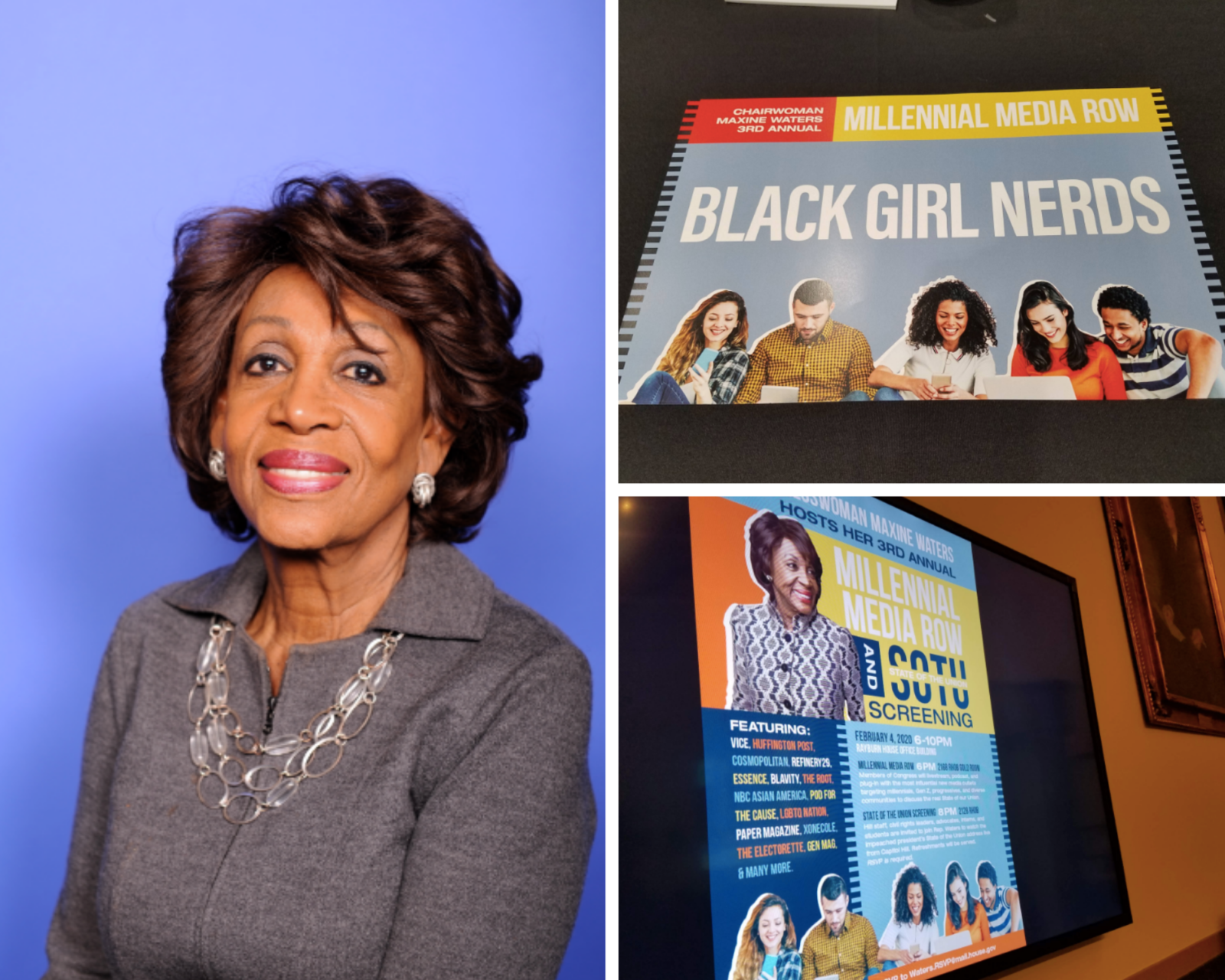 The idea behind being a representative is reflection: the duty to reflect the ideas and values of those you represent and to support those activities that are in their best interests. The citizens in California’s 43rd Congressional District are served by Representative Maxine Waters, who has risen to the position of the Chair of the U.S. House Financial Services Committee.

The Financial Services Committee room was the venue for her State of the Union (SOTU) Watch Party. But before the President’s slights and the House Speaker’s shredding, there was Representative’s Millennial Media Row.

This is the third opportunity Representative Waters has provided for the Fourth Estate to meet those elected to represent the Third Estate, the citizens. It was interesting to see several members of Congress take some time before the SOTU to reach out beyond the largest outlets to include other media outlets. Representative Waters took some time out of her busy schedule to sit down with BGN before the SOTU.

You’ve been at the forefront of the movement to impeach the President. What were your thoughts on December 18th when it finally came to fruition?

Well, I was extraordinarily pleased when the House of Representatives, about 8:20 in the evening on December 18th, voted to impeach this dishonorable president.

It’s the day before the Senate’s vote to remove the President, and it’s likely that the Senate will vote to acquit him. What are your thoughts?

My thoughts are that these Senators have been intimidated by this President. They’re only thinking about themselves and not about this country. They’ve claimed to be patriotic, and they claim that they love the flag more than anybody else, but they have defined themselves now as they have allowed this President to take over the Republican Party. He owns it. It is the Trump Party now, and they’re going to have to answer to their own constituencies when they ask them, “Why couldn’t you vote for witnesses? How can you have a trial without witnesses? Why were you interested in documents?” While they think they have done what it takes to save themselves, I think they’re going to have to answer some of those questions. Given all of that, they have not done what the Constitution mandates them to do to have a credible trial.

Now you mentioned the Constitution. Over the years certain Congressional powers were ceded to the Executive. How has the last three years affected your view on Executive power and should any changes be made?

Oh, absolutely, I’m going to tell you. I have said it to my colleagues, and I’ve got to put more time and attention on it. We’ve got to create a whole new body of law, as it relates to the President, and these assumed powers that he has taken advantage of. I want to tell you it’s been a lesson to me about how the power of the presidency can be so extensive.

There seems to be a constant erosion of the Voting Rights Act. What can be done to ensure the integrity and the protective rights of each American to vote?

Well, first of all, the Congress of the United States has got to insist on protecting voting rights. I’m still concerned about the way that we have done it and about Section Five of the Voting Rights Act and whether or not they still have a way, based on what everything that we have done, to get the oversight that is needed on jurisdictions who will undermine the Voting Rights Act. We got to constantly work on it; we have to resist all efforts by these various states to undermine voting rights and to suppress voting. We’ve got to fight to identify every effort that they make to undermine and suppress voting rights and to suppress our vote. That means whether or not we’re standing in long lines, whether or not they’re cutting down on early voting days, whether or not they’re requiring unreasonable identification, on and on and on. This is a struggle and a fight that we have got to remain in.

The minority community has historically been reticent to participate in a census, and given the administration’s recent antics, who can blame them? Why should people of color participate in the census and what do you see as the consequences if we don’t?

I’m very worried about the census. I’m worried that a lot of Black Americans, in particular, are leery about being identified, about putting down information that they think will be misused. They cannot trust this President, even though we’ve done everything that we can to guarantee them that [what they fear] cannot happen. I think that they’re suspicious and they don’t trust what could happen. So we’ve got to work hard to let them know that if they don’t get counted, they’re going to deny resources and dollars coming to our communities. All of the issues that they’re concerned about, issues about whether or not we getting our fair share to deal with the problems of our community, will be undermined if we don’t get that count up. So I’m very worried about it.

Thank you so much.

Section 5 of the Voting Rights Act is one of the provisions that has to be renewed. This provision provides for certain States and localities to have any changes in their voting requirements reviewed to ensure that they are not discriminatory. Back in 2013, the Supreme Court ruled that the formula used to determine which States and localities are required to submit changes to their voting requirements under Section 5 was unconstitutional, essentially freeing several states to enact less than fair voting requirements. To read more about this check out the statement released by the Congressional Black Caucus on the matter.

The 2020 Census begins on April 1. 2020. Several organizations including the National Association for the Advancement of Colored People (NAACP) have information and campaigns explaining the importance of the census and what to expect.

Our Black forebears fought tooth and nail for each of us to be recognized simply as a whole person and worthy of the common courtesy and decency afforded all Americans. Please don’t give that up by failing to vote or to participate in this year’s census.

Need A Break From the Impeachment Hearings? Listen to BGN Politics!