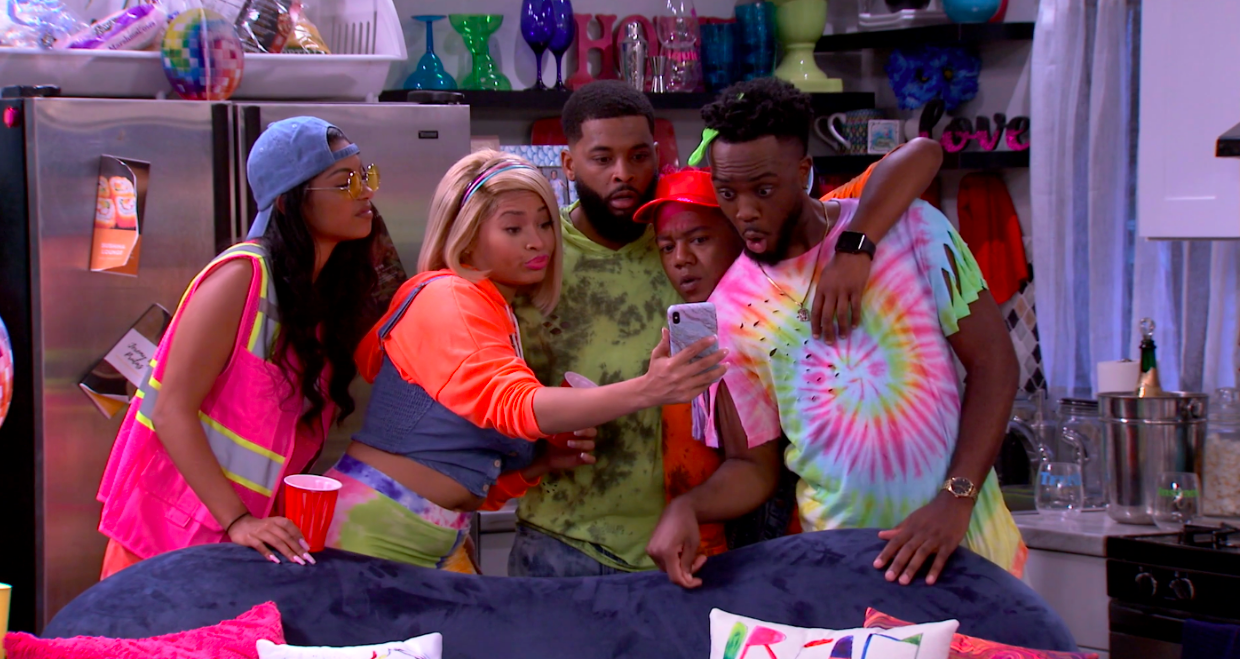 Millennials is a multi-camera comedy series written by father-and-son team Rugg Williams (In the Heat of the Night) and Oren Williams (Rebound). The show chronicles the lives of four 20-something roommates. There’s a business student, a YouTuber, a college dropout, and a personal trainer. The men navigate the chaos of being young, Black, and continually looking for success. Set in Los Angeles, the show follows these young adults as they find themselves. The show is executive-produced and co-directed by Bentley Kyle Evans. Evans is known for such classics as Martin and The Jamie Foxx Show.

During a panel at the Television Critics Press Tour, BGN got a chance to hear from the cast about the show. The panel included Kyle Massey (Omar), Keraun “King Keraun” Harris (Jaheem), Teresa “Topnotch” Celeste (Mercedes), Philip Bolden (Travis), Aaron Grady (Todd), and Bentley Kyle Evans. Check out some of the conversations below.

Millennials is a series that centers on Black brotherhood…

Bently Kyle Evans: I think it’s a very relatable show, number one. I think that you saw Living Single back in the heyday of the business. This is the flip of that, so we could see these unique voices being told. The Black experience from a male’s perspective hasn’t been seen in a fellowship kind of scenario. You’ve seen it as individuals and in family situations, but I think it was like we wanted to give a message of what that Black experience was like. Like that dorm room experience and with this ensemble piece. I think we’re able to capture that in a very unique way.

Philip Bolden: We see a lot of the negative on the evening news and everything like that, so for us to be able to see the real stories of Black men from different walks of life in varying stages of success and just being together and being positive and uplifting, I’m excited for people to see that.

Evans: It’s interesting because we all have a beginning. We all start somewhere, and no matter what we end up doing with our lives, there was a nucleus that got us to where we needed to go.  That’s what we’re trying to show with this show. It’s the innocence of individuals that are out on their own for the very first time, and they’re coming together on one stage to share their immaturity and also show what their evolution is going to be through the series. Hopefully, there will be seasons and seasons in which we can play that.

Aaron Grady: Here we go again. [Laughs.] My character, Todd, is a really interesting character because, in my personal and humble opinion, he’s the sexiest. I’m pretty sexy in real life. Also, for Todd, his goal in life is to make the most amount of money with the least amount of work. So in my book, he’s a genius. Now, you know, he runs into some problems like taking experimental pills that have weird side effects, male prostitution, he’ll do anything. But at the end of the day, he has a good heart and his roommates let him stay there rent-free.

Kyle Massey: My character is Omar. He really is just a kid. He’s focused on business school and just moving up that social ladder in every element of his life — where he lives, where he works, how much he gets paid, and what he does for a living.  He’s all about climbing that ladder and getting to the top. Sometimes, just the people that I live with and my friend group are just not on the same wavelength as me. They got their own things going on, and I feel like I’m a driven character. I’m motivated. I know what I want. But there’s just a lot of distractions, and I feel like when you put all of us into the pot together, that’s where funny “stew” happens.

Evans:  Well, I can’t take the credit for saying that I assembled it.  I was instrumental in the casting of it and everything, but I can’t take the full credit.  That was a collaborative effort between myself, Oren Williams, and Rugg Williams. We all came up with it together.

However, I will say I’ve worked with two of the cast members prior, Aaron Grady and Teresa, who are very dear to me. I knew that I wanted to have both of them involved in it somehow. I had met Keraun before. Philip and I had never crossed paths. I had met Kyle years and years and years ago, which he probably doesn’t remember.  But when the names started coming up in casting, it just seemed like these were four unlikely individuals who could come together and create this science in a sense, and that’s what we were able to do.

It felt like they had worked together for many, many years prior to this thing. When I walked in, they had already kind of got to know each other and they were making fun of each other. It was just a cool thing to see. I had experienced that with the Martin show. The cast came together in a very organic way, the same thing. Jamie Foxx was a little different where they kind of had to get to know each other and make it work, but this thing was a natural with the millennials, so I’m proud to be a part of it.

Grady: I just want to add, Bentley is a sitcom legend. He’s the man behind the Martin show. He’s the creator of The Jamie Foxx Show. So, for him to have any belief in us at all and put his energy and effort towards this show means a lot. He is a legend in the Black community. To have another show with his name attached to it, we’re that same style of show, we’re just the millennial version of it.