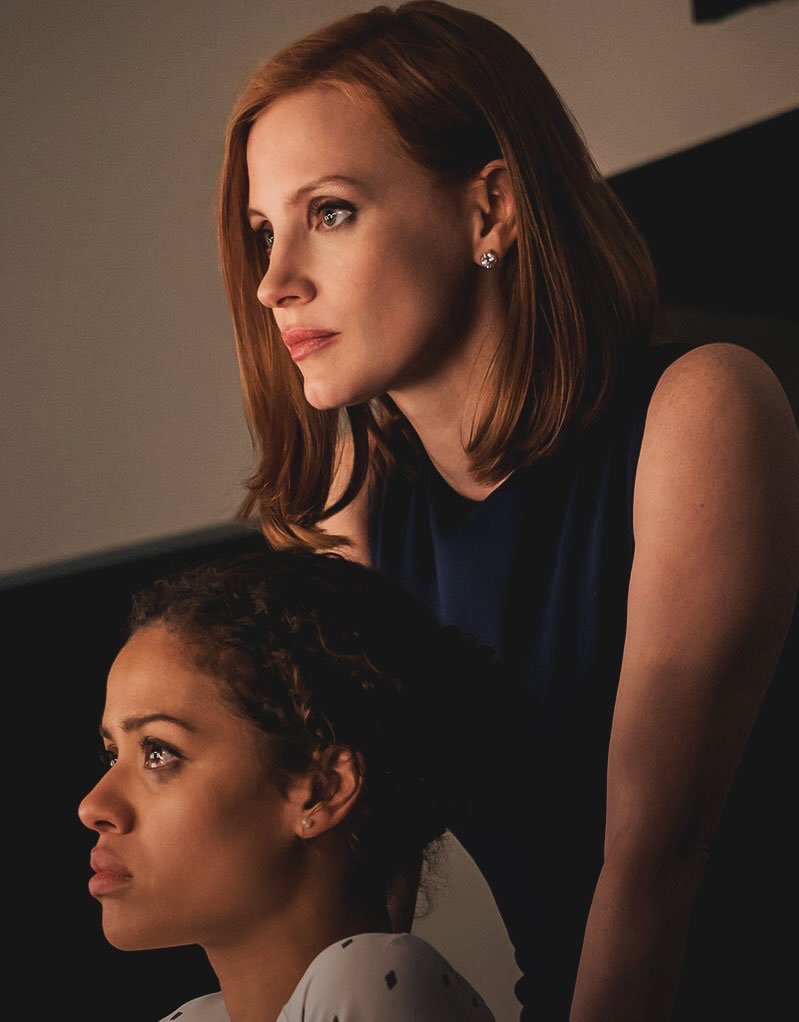 Elizabeth Sloane (Jessica Chastain)  is one of the top lobbyists in Washington with a winning streak that is unmatched. She works at the top firm where she is propositioned to represent pro-gun interests. A potential client, Bob Sanford (Chuck Shamata), wants Sloane to organize a campaign to attract women to buy firearms, but she declines. However, a chance encounter with Rodolfo Schmidt (Mark Strong), the CEO of a small, boutique lobbyist firm, brings Elizabeth to the other side of the gun fight, which starts a war between those pushing for and those pushing against gun control.

What are they fighting for exactly? One group wants to screen and do background checks on those who buy guns, and the others want to prevent that. Throughout the film, Elizabeth hatches a plan to ensure she wins this battle at all cost. And I do mean all.

Elizabeth Sloane isn’t a lover — she’s a pill-popping machine. She isn’t interested in family and never talks about her own. To her, people are pawns and she will use them as she sees fit. She meets male escorts to have sex because it’s a human need much like eating, nothing more.

She keeps people in suspense as no one is sure what Bonkers s**t she’s up to. For example, there is a scene where Rodolfo calls Sloane’s antics tantamount to “James Bond spy shit.” Sloane has her co-workers followed by private investigators and has their conversations recorded without permission. How does she accomplish this? By using cockroaches that are wired and controlled to record audio and video. Most people are likely to shy away from danger, but not Sloane. Even though it may cost her, her freedom, sneaking behind other people’s backs, and putting herself in harm’s way in order to win is how Elizabeth Sloane does business.

Elizabeth Sloane is a character so different from the shy, soft-spoken actress. That should be a testament to how talented Jessica Chastain is. In her career she has shown a full range of talent; she can do no wrong. Chastain plays the somber daughter in Interstellar, an action heroine in The Huntsman: Winter’s War, and a psychotic brother-f**ker in Crimson Peak.

Now, with Miss Sloane, Chastain brings the heat. She carries this film on her shoulders; she elevates even the most flawed stories. Gugu Mbatha-Raw co-stars as Esme Manucharian, the liberal lobbyist who has an honest reason for wanting tighter gun laws. Raw is sincere in her performance. The sadness in her eyes makes a statement that her character is honest about reckless gun use. She is a powerful and emotional actress that brings vigor to her performances. It’s time the award circuit recognizes talents. She gets my nomination for the Best Supporting Actress next year.

While this is an entertaining movie with some humorous moments of dialogue and stunning fashion, writer Jonathan Perera missed an excellent opportunity to educate the audience on lobbying history. The film can be a bit too over the top at times. It was almost like watching politicians on a long Jerry Springer episode. John Madden’s blue/gray filter drains the film of its color to create a gloomy atmosphere because lobbying is depressing. The only vibrant color is Jessica Chastain’s red hair and lipstick. This could have been on purpose to highlight a part of Sloane’s fiery personality.

Miss Sloane could not have come at a more awkward time. When Johnathan Perera wrote the script, I wonder if he ever intended for the movie to have this much relevancy. With the major turn of events in America, this political thriller comes at you like a freight train with its dollar store, Aaron Sorkin-esque dialogue.

What saves the film from total self-destruction is Chastain who is so riveting, so icy, and so heartless — you come to understand why lobbying is a job fit for her character. One thing that stands firm in the story is that every element of the government and its operations are inherently corrupt. Conniving, backstabbing, and lying by those who will do anything to win is commonplace. It’s gross.

Lobbying is all about persuading those with the political and financial power to make things happen, but the film exaggerates the job and makes it seem more exciting and stylized than it really is.

This movie is all about Miss Sloane, and not really about the actual job of lobbying. That’s unfortunate because examining sex, race, and the lobbying battlegrounds in this profession would have added a bit more realism to the story. These things are important and why Hollywood screenwriters keep avoiding it is beyond me.