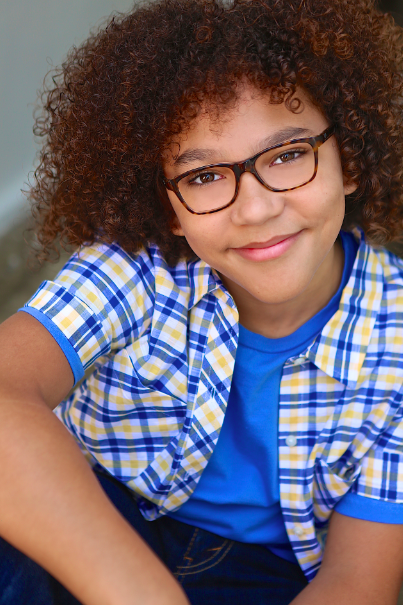 ABC’s Mixed-ish, the prequel to the runaway hits Black-ish and Grown-ish is revving up for Season 2. Last week BGN ended our week in a bright spot, interviewing the delightful Ethan William Childress, who plays Rainbow Johnson’s only brother Johann. BGN spoke with Childress about his experiences being back on set for Season 2 shooting during our new reality, a little math and science, and the joys of cooking.

I saw on your IG some Bananas Foster happening. Was it good?

Dude…it’s been my favorite dessert ever since I first tried it! The first time we made it, my dad’s like, “Come into the kitchen, we’re gonna make something.” I’m like, “What?” He was like, “Just come on, you’ll see.” We cooked it, then poured the alcohol on top and lit it on fire. That was so cool. And delicious.

What has been your favorite math or science assignment this past school year?

Making slime was so much fun! And honestly just a lot of things about science, like learning about volcanoes earthquakes. I like to do research papers sometimes on random things that come up in my mind, like sharks. I became so fascinated with sharks, so I did research and wrote a paper on them.

I love to cook. One time I tried this like, bacon wrapped shrimp recipe. Oh my god, it was so good! And we’ve added brown sugar to the bacon to make it sweeter. We’ve tried all kinds of ways to make it better. It’s so good.

When you aren’t cooking up a storm in the kitchen with your dad and making volcano experiences, you’re a working actor! Mixed-ish is a spin-off of the hit show, Black-ish. Were you a fan of Black-ish before you got cast in Mixed-ish?

Unfortunately not, but once I got the gig on Mixed-ish I started watching Black-ish and I am in love.

Since Mixed-ish takes place in the past, does watching Black-ish help you in developing your character, young Johann?

It does actually. I can take elements of what Daveed Diggs does, who plays the older version of Johan, and kind of bring that into my own work, and it feels like I’ve found this perfect mix between my stuff and his stuff. I feel like I can really bring the character to life.

I can relate to him. He’s curious and adventurous, and he does all these fun things. Just he’s so loving and loveable at the same time while being naive. Everything goes over his head. It’s an awesome character.

When you heard you got the part, what did you do?

I freaked out. And then I started crying. [Laughs.]

I think that’s the perfect response because you’re getting all the feels! Now, I know auditioning can be really challenging. Tell me your process for auditioning.

Now it’s mostly self tapes. But honestly I can’t tell you if this is more hectic than what we used to do. I live in Las Vegas but I audition in LA, so we used to drive down, which is a four and a half hour drive. We’d drive back in the same day just for one audition. So this kinda feels better.

For any young actors out there, what would be your biggest tip for self-taping auditions?

I mean, just kinda be yourself. That’s what I always do in auditions. Bring your own element to the character. Just do what feels amazing. Just be you! And always have fun. Literally this is my dream job, so I always have fun whatever I do.

You have one film under your belt and are voicing a lead character in a highly anticipated film franchise for a major streaming service. What are your favorite parts about voice acting and working in film?

The best part about working on screen is that I get social interaction right now with people I really like. Like Aricka and Mimi. I get to see people I really, really like. It’s so nice seeing them on set, and sometimes to be able to go eat dinner after. It’s so nice. And then with VO [voice over], it’s honestly really cool how they do it. It’s like a TV screen and then everybody’s on Zoom. It’s honestly really cool. I get to have little breaks to have snacks and water, so that’s really good. I feel like VO is just so fun because I could be doing this [he busts a dance move] or this [he tosses his head around joyously] and you won’t know. You’ll just be hearing my voice, and all that moving makes my voice sound better. It’s super fun.

So Season 1 was pre-pandemic. How is it shooting now during covid?

I’ve gotten a little more comfortable with it, but it’s still all pretty new. And it’s a little bit weird, like being on set where everyone is wearing masks all the time and shields. But at least I know that everybody’s safe. At the end of the day that’s all that matters. In between takes we put our masks back on, and the director will come in and give us notes. Then once they start rolling the cameras everybody that’s not needed in there they move out while we shoot without our masks. The camera people and lighting and sound all work with masks on. In between takes and when they are changing camera angles, everything is wiped down really well.

For this season what are you super excited about?

A lot of the jokes are really funny. We just did the last episode table read, and I’m really excited for this episode because it’s so funny.

How much do you love acting?

Words just can’t describe it. It’s so much fun to do something that you love. I feel really blessed to have come this far in acting and to be here right now.

Any parting words for your fans?
Follow your dreams, be happy with everything you do, and if you make it to your dream job, good job! Just keep shining!

Travel back to the 1980s with the Johnsons as Mixed-ish returns Tuesday night January 26, at 9:30pm EST on ABC. Created by Tracee Ellis Ross, Kenya Barris, and Peter Saji.