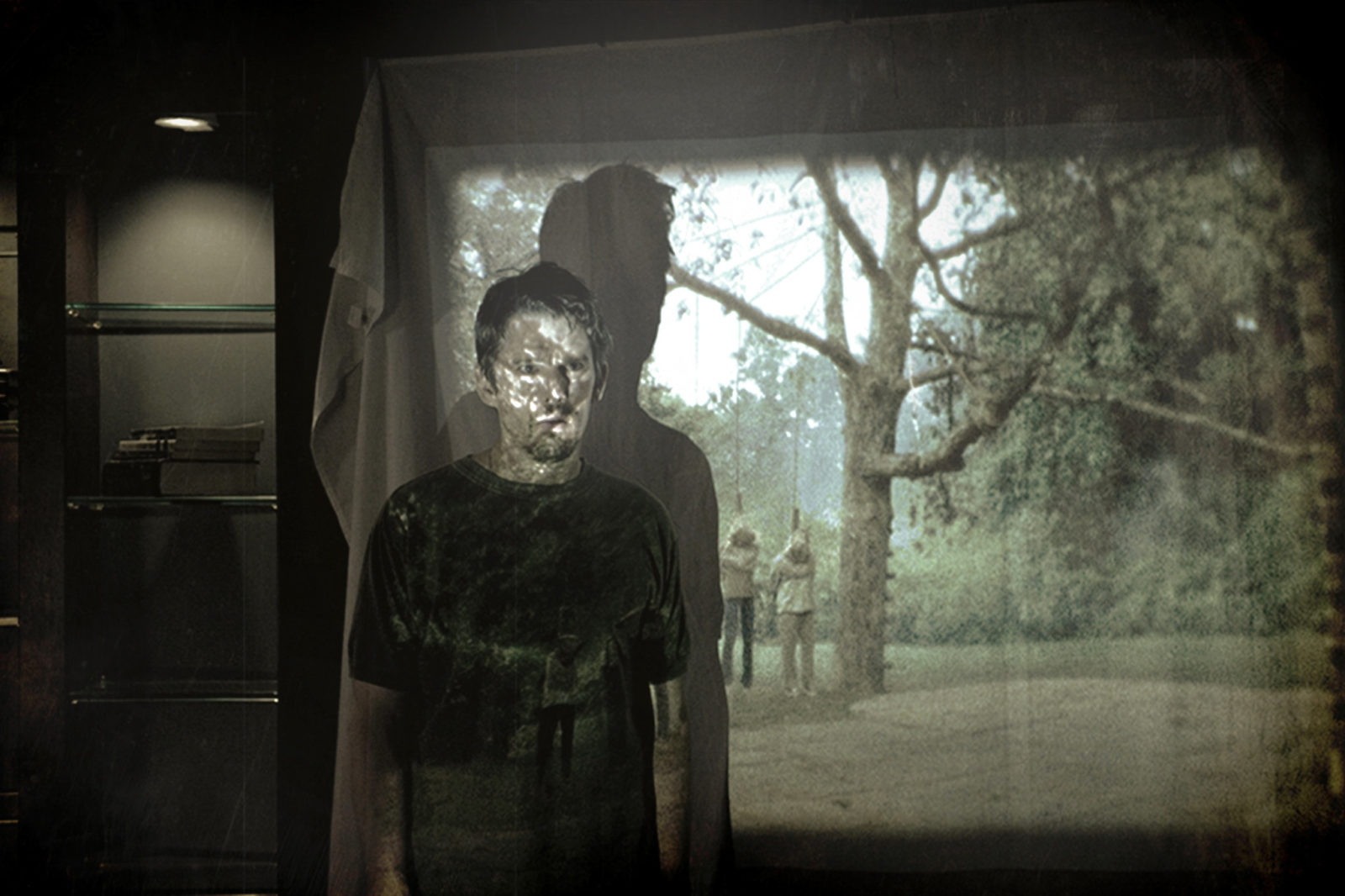 It’s getting harder to impress horror audiences, especially with the rise of highbrow horror. But, back in 2012, Scott Derrickson and C. Robert Cargill, the writer-director duo behind Doctor Strange and this year’s The Black Phone, gave us a movie full of atmospheric terror. In 2020, Forbes reported that the “Science of Scare Project” determined Sinister was the scariest movie by measuring audience heart rates, which went from an average of 65 BPM to 86 BPM while watching the film. So, the effectiveness of Sinister has been scientifically proven, and we can’t argue with science.

True crime author Ellison Oswalt (Ethan Hawke) is in desperate need of a new bestseller. So, naturally, he moves his wife, Tracy (Juliet Rylance), and their two kids, Trevor (Michael Hall D’Addario) and Ashley (Clare Foley), into a crime scene. The wife and kids don’t know that bit. Local law enforcement isn’t too thrilled with Ellison’s arrival, or the way he portrays law enforcement in his novels, meaning he points out their mistakes.

In the attic, Ellison finds a single box filled with 8mm film reels. The first one he watches is a grainy, gruesome scene of four people hanging from a tree with bags over their heads. We, of course, have already seen this snuff film. Before we meet the Oswalt family, we see the family thrashing in nooses.

It’s quite the intro and one that will stick with you. What makes it worse…this happened in the yard of his newly acquired home. One of the children is still missing, assumed to be abducted by whoever executed her family. This only piques Ellison’s interest more. An unsolved murder and a missing girl? Jackpot.

Each film depicts a horrifyingly unique family murder that’s scarier than the last. It’s unsettling, to say the least, but Ellison can’t stop watching, much like a true crime documentary. You know those old home movies and school pictures of the victim that appear on a loop? This is kind of like that. Ellison manages to get through them all with the help of whisky and cozy cardigans and starts making connections. These are serial murders dating back decades.

He spends the second act sleuthing about with the help of Deputy So & So (James Ransone), yes that’s what he’s called. Ellison’s real fear is losing notoriety and the fear of failure, which fuels his obsession more. It brings up the question we all ask of true crime: is this informative or exploitative? Will writing about someone else’s tragedy do any good? Is it just a surefire moneymaker?

Ellison is like every horror movie dad who puts his family’s lives in danger for good real estate, or any other selfish reason. He proceeds to gaslight the hell out of his wife (See: Insidious, The Conjuring, The Haunting in Connecticut, Poltergeist, Orphan, Speak No Evil, The Shining, etc.). He only realizes his mistake when things are already past the point of no return.

It’s when things take a turn for the paranormal when Ellison is second-guessing this whole living-in-a-murder house idea. He’s wary of the typical thumps and creaks from the attic. (Though I’d say his son Trevor’s occasional shrieking and contorting from night terrors is far more jarring than any bump in the night). He enlists the help of occult expert Professor Jonas (Vincent D’Onofrio) via Skype, who tells him about obscure pagan deities and ancient symbols. Now he knows these are supernatural serial murders. I won’t give any more away, but I will tell you that it gets dark.

Sinister has a lot going for it, like the great performances from Ethan Hawke and James Ransone. However, the best element is the authentic chilling Super-8 films. Sure, there are some jump scares, but the movie doesn’t rely on them, which is always refreshing. It also has some of the best horror movie music I’ve heard. It’s bizarre and distorted but also understated, which makes the scares extra effective. Christopher Young’s (Pet Semetary) score works so well with these disturbing images.

The found footage sub-genre doesn’t always work, but Sinister is a great example of when it does. As C. Robert Cargill said: “It feels like you’re watching something that could actually happen. There’s nothing slick or cinematic about it – it is raw, dirty, and poorly lit. Just like real life.” That’s exactly what the Super-8 murder reels look/feel like.

Sinister remains one of the most original horror movies out there. Horror fans can appreciate its genuine scariness and overall creepy, grainy aesthetic. It’s an interesting combination of a crime thriller, murder mystery, and a harrowing tale of demonic possession. It also marks the beginning of an incredible collaboration between Derrickson and Cargill, who continue to put out fantastic films.

Sinister is currently available on Peacock.