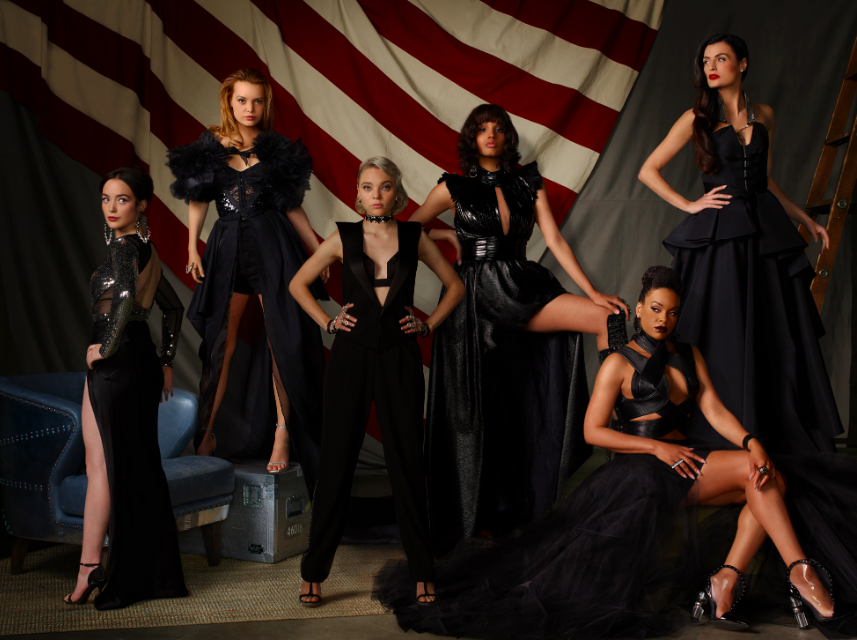 At the Television Critic Association (TCA) Winter Showcase, BGN had a chance to cover the Freeform panel for Motherland: Fort Salem.

The panel included creator, writer, and executive producer Eliot Laurence, executive producer Keven Messick, and cast members Demetria McKinney (Anacostia), Amalia Holm (Scylla), Taylor Hickson (Raelle Collar), Ashley Nicole Williams (Abigail Bellweather), Jessica Sutton (Tally Craven), and Lyne Renee (General Sara Alder). We got a chance to learn how this show came to be and why it is one of the more anticipated shows of the season.

Motherland: Fort Salem reimagines history by creating an alternate present-day America. This is a revolutionary narrative, both literally and figuratively, where the persecution of witches ended hundreds of years ago when they cut a deal with the U.S. government. This provocative drama follows a trio of young women, all bad-asses, as they’re catapulted from basic training in combat magic onto the frontlines, fighting terrorists threats with supernatural tactics and weapons. In this show, traditional gender roles are tossed out the window. Not only does it showcase women in power, but it leads with an all-female cast.

The show is about witches or women with supernatural abilities. A lot of Wiccan history and stories were utilized in the making of this show. “Everything in the show is kind of an homage — not everything, but a lot of stuff on the show is an homage to witch history,” says Laurence. One example, in particular, spoke to an identifying mark, like a Scarlet Letter of sorts. “The marks that the witches are born with that change when you have sex is sort of a reclaiming of the marks that were used to indict and identify witches during the burning times,” explained Laurence.

The idea of witches and the strong female stemmed from creator Laurence, who the cast raved about for bringing such characters to the page. The female energy in this show is fantastic. There are so many different personalities. “To understand the womanhood, the power that we all possess,” says McKinney, “and for it to start with a man understanding and recognizing the power that needs to be expressed within us, bringing the story to fruition, bringing in female directors, bringing in such a diverse cast — it’s really been a joy, an honor, and a pleasure to take this journey.”

While Wiccan history and other supernatural elements were influences, the world of Motherland: Fort Salem originated in the mind of Laurence. “He was a big Wikipedia for us,” says Hickson. The cast went to him for all their questions, building the characters with as much knowledge and backstory as possible. It was collaborative in nature. “He lets us build upon that…working with our characters, he was very open to the ideas,” says Williams.

A lot of Laurence’s ideas were taking what was meant to be bad and making it positive and powerful. It was clear Laurence knows this world inside and out, and understandable, as it took nine years to get the show up and running.

“He pitched it nine years ago,” started Messick. “But the richness of the idea was the same as when he first pitched it. He had the whole world. He’s just got a wildly inventive and ambitious imagination that is an awesome thing as a producer to be able to help bring to life.”

Laurence loved this project so much that he tried to get it off the ground in the form of a book series, before getting busy with other projects. “Kevin called me a couple of years ago and was like, ‘This is a TV show.’ I was like, ‘Yeah, it always has been,’” states Laurence.

The themes are ones audiences will love. Motherland: Fort Salem is taking history, modern issues, and stigmas and flipping them on their head. “We’re all harnessing power that has been taken away from us, in a way, by society,” states McKinney. “The fact that everything is so flip as far as the gender roles — the show is actually genderless. We’re actually quite androgynous in our roles and our duties in what we do, which gives everybody power overall.” It’s so intriguing.

In this show, women have the military control, which affects who is in power, while whoever is in power informs the norms. Females leading the charge and owning their power is the norm. The cool thing is, it’s not your typical girl vs girl. “In this day and time, it’s more crucial than ever that women uplift each other and support each other, and I think we’re incredibly humbled to have a series that conveys that message,” says Hickson. Their individual strengths are their power.

The idea is these women need to work together to survive. Although they may fight, the end goal is the same. “We didn’t want their sisterhood to be easy,” says Laurence. The ladies do get tested. They learn lessons. But the ultimate narrative is a positive one for young girls to older women alike.

This show is going to be incredibly fun to watch. Perfectly timed to debut during International Women’s Month, Motherland: Fort Salem will air Wednesday, March 18 on Freeform.