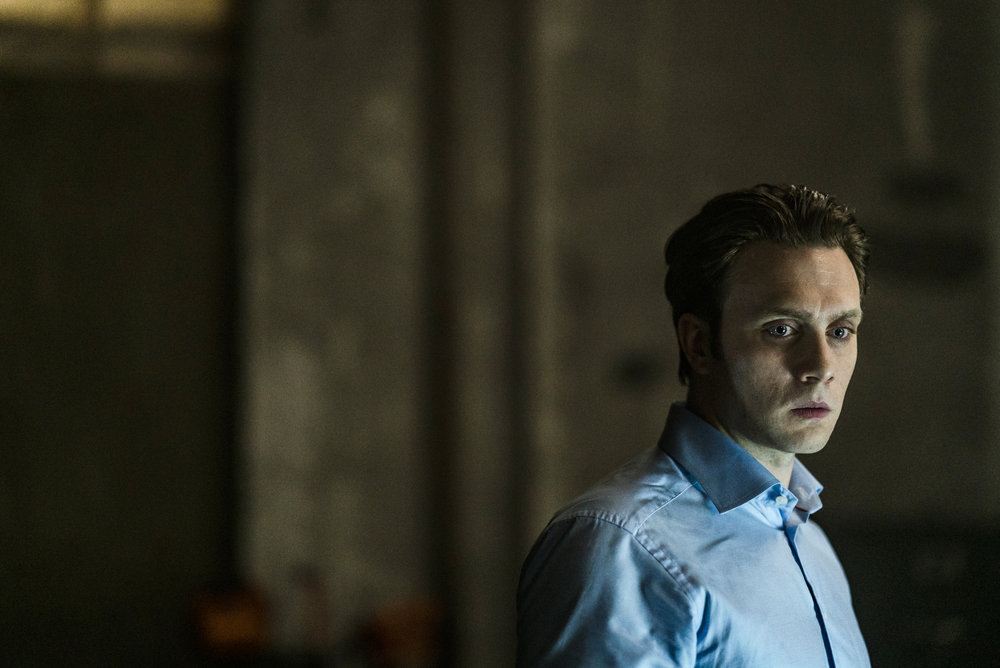 Here we are once again trying to break down and deconstruct something that at times makes absolutely no sense, but this is why I love this show.  It keeps me in WTF mode every second of every minute and I have to know more! Last week, when went into Elliot’s mind a little deeper and Mr. Robot revealed himself to Krista, then we saw the demise of Tyrell Wellick’s wife Joanna and Whiterose reminded us once again he is not to be played with.

So what the hell is happening now?

Your guess is as good as mine. But let’s try to recap this anyway, shall we?

We open with a familiar scene between Tyrell and Elliot going through another hack.  However, Elliot isn’t himself for very long — Mr. Robot appears and grabs a gun to point at Tyrell.  He tries to fire, but the gun is jammed.  Tyrell sees this as a sign to give him a second chance. When Mr. Robot insists it’s not, Tyrell then begins to tell him that he is a God because the gun misfired. After Tyrell forces Mr. Robot to shoot him in the head, Mr. Robot reluctantly pulls back and realizes there is a second stage to this hack. And he also realizes that he can work with Tyrell and protect Mr. Robot from Mr. Robot (or perhaps Elliot?)

Oh yeah, prepare to be even MORE confused as this recap goes along…

So then we meet our guy Irving (at least that’s what I THINK his name is).  He meets with two members of the Dark Army and both are investigating a vehicle owned by Tyrell Wellick. Tyrell and Mr. Robot are caught by surprise when Bobby Cannavale and his Dark Army crew enter the Fun Society arcade room and guns are drawn. As it turns out, the Dark Army crew know about the honeypot hit and its connection to Gideon. Because of what Tyrell did with the ECorp hack, he’s likely being tracked by FBI and homeland security, so he’s taken by Dark Army to lay low. Tyrell is taken to a house in the middle of nowhere and kept there.

Elliot is visited by the authorities and is arrested for Grand Larceny and unauthorized use of a computer. Then we cut to Whiterose who assigns a minion of his to start an image rehabilitation of Tyrell Wellick.  He states he is going to be blamed for the 5/9 hack and his image must be protected and given a positive perception to the public. Then we see an image of an orange monster on the channel C-Span (otherwise known as Donald Trump).  Whiterose says he has a potential President in mind he wants to back and looks wryly over at the TV screen.

As Tyrell gets used to his new digs, an older man who identifies himself as Mr. Williams is in his house. Mr. Williams has been tasked by Dark Army to interrogate Tyrell. His first question to Tyrell was, “Did you kill Sharon Knowles?” As he asks it repeatedly, Tyrell finally denies the accusation. After a series of repeated questions in the same sequence over and over, Tyrell finally breaks down and tells the truth.  It appears Mr. Williams is a human lie detector (with an affinity for cocaine).

Tyrell tells all and admits to murdering Sharon Knowles.  He also admits that he will always be loyal to Elliot. That was the key to getting Tyrell entry to stage 2 prep supported by the Dark Army. The name of the op is now Red Wheelbarrow.  We cut to a scene where Tyrell accepts a collect call from an inmate on his cell phone. Tyrell believes it’s Elliot.

Tyrell is frustrated and Irving, sensing this, takes him outside and has Tyrell chop some wood.  I’m not certain this is supposed to be a bonding moment for these two, but I was fascinated by the fact that Tyrell Wellick knows how to chop wood like a brawny mountain man.  Who knew?

So now we have a moment with Darlene and Cisco.  This is obviously a flashback because Cisco is dead as a doornail.  However, an interesting plot twist emerges when after he converses with Darlene about installing an Android filled with malware. The vehicle he jumps into the backseat of is being driven by none other than Irving. Irving discloses to Cisco that Darlene is just a “job” and to stop caring about her and not get too close.  Darlene is protected, while Cisco is not, according to Irving.

Irving drops the Android malware to Tyrell to decode and says this has nothing to do with their plan.  And Tyrell insists Elliot should be working with him on this. As Irving leaves Tyrell on is own to continue the hack, Tyrell begins to peruse gossip websites about Joanna and her alleged infidelity.  This is intercut with shots of their baby as well as shots of Tyrell incessantly chopping wood.

I must add shirtless bearded Tyrell chopping wood is my new favorite thing.

Tyrell attempts an escape but is quickly spotted by local police. He was quickly arrested.  However, when the local cop calls for Tyrell to be detained by the FBI, the vehicle stops alongside the police car and the officer is shot in the head. Irving set this up all along and was already two steps ahead of Tyrell. Irving has a chat with him, while cool as a cucumber about the entire situation.  He shares an anecdote with Tyrell about his own family.

Which turns out to be a bold face lie.

Leon is back! Irving pays a visit to our old friend Leon, a secret agent of the Dark Army. Irving asks Leon about Elliot’s whereabouts.

Irving and Tyrell visit the Fukan Hotel in the Chelsea section of the city and this serves as a rendezvous point for a plan to get Elliot out to see him. Tyrell proceeds to shave his mountain man beard and get cleaned up for Elliot wearing his favorite suit. Tyrell goes downstairs and hops in the backseat with Elliot.  If you recall, this scene picks up from eps2.9_pyth0n_pt1.p7z.

Cut to an extreme close up of Elliot’s intestines (remember Tyrell shot him) and he’s being operated on by hired doctors of the Dark Army.  Angela is present and assures Tyrell that Elliot is going to be okay. Angela then proceeds to tell a frightened Tyrell that Elliot can become a different person.  The closing shot is Tyrell looking over at Elliot waking up from surgery and then a smash cut of Mr. Robot as Elliot.

Quote of the night goes to Whiterose!

“If you pull the right strings, a puppet will dance any way you desire.” – Whiterose

Tonight’s episode tied up some loose ends and connected parts of season 2!  We also got some great backstory and character development of Tyrell.  It was all about him! This plot that took a while to cook was worth it and was incredibly savory while we watched it unfold.