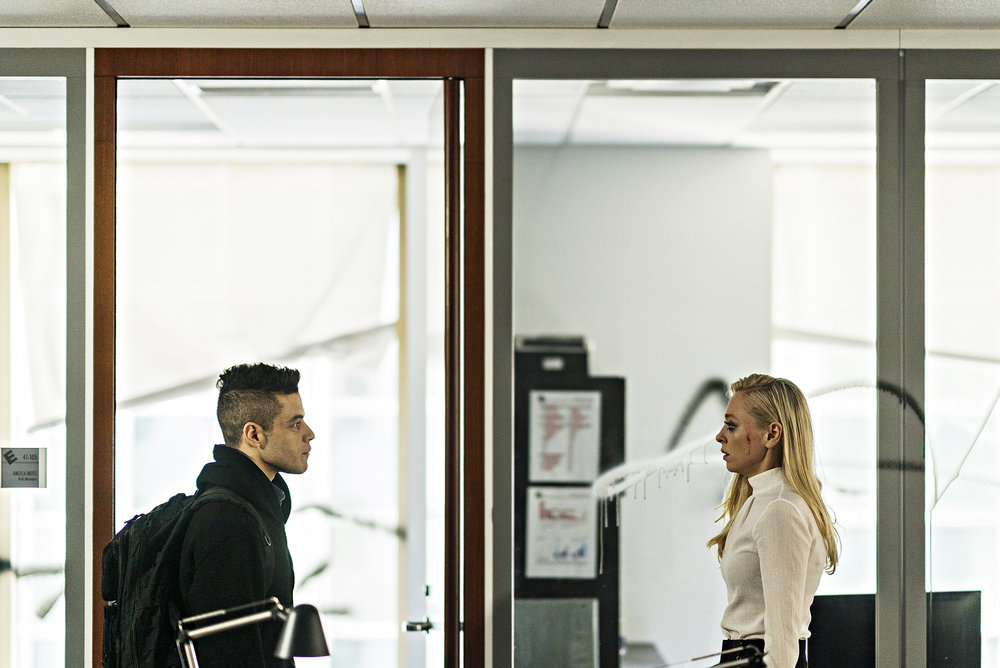 As we continue to apply Vaseline to our scalps still burning from the snatching of our edges last week, we prepare ourselves for the absolute worst on this week’s Mr. Robot. What is going to happen now that Elliot finally knows everything?

Here we go.  So what went down this week?

The pacing slows down a bit and we open with Angela as a child watching the animated series, Back To The Future. She’s having a conversation with Mr. Alderson (aka Mr. Robot), at her dying mother’s home.  It appears to be a gathering of close family and friends to bid their goodbyes before her passing. Mr. Alderson encourages young Angela to converse with her mom using an example of Marty McFly’s relationship with his own dad to coax her to reach out to her mother. Angela is dealing with the difficult stage of facing her mother’s mortality—this plays a pivotal role in her character arc as a whole.  It plays heavily into her role as a minion of the Dark Army, and someone who has aligned themselves with Tyrell Wellick in Stage 2.

We cut to her and a furious Elliot enraged over what Angela has just done. Elliot is in disbelief that Angela knows Whiterose, Tyrell, and is working with the Dark Army. Angela appears as if she’s becoming delusional; believing that no one will be hurt if a building blows up. She brings up her mother and Elliot’s father—to which Elliot tells her bluntly that she’s making no sense.

Darlene is being interrogated yet again by Dominique who’s distrust in her is at peak levels. Darlene receives a call from Elliot who texts her information on Tyrell’s location. Although this information is helpful for Dom, she still feels like Darlene isn’t telling her everything she needs to know.  Dom then reports to Santiago that she’s got eyes on Wellick, to which he advises that until the lead is solid, he will place surveillance on Wellick.  Dom disagrees with his strategy and reluctantly follows his orders.  After she leaves his office, Santiago texts Irving that the location has been burnt (meaning exposed) and that Wellick needs to be “taken care of”.

Next up is Whiterose and Phillip Price at a fancy soiree and Phillip still nags at Whiterose about signing the China accord.  Price is really about to get on my damn nerves about this economic accord situation—so anyway, Whiterose says it will be done by the end of the day.  Little does Price know that by then it will be too late since Stage 2 is already in motion. When Price leaves Whiterose’s side, he receives a call on his cell.  He’s informed that Wellick’s location has been compromised. For Whiterose at this point, it doesn’t change anything.

Elliot is back on his mission to kill stage 2 and re-enters E Corp. He manages to snag a badge off of a security officer which allows him entry into various parts of the building. When Elliot finally finds a space to set up his patch and try to roll it back and reverse Wellick’s malware. However, he can’t start the restore because Mr. Robot takes over.  At this moment we see that Elliot has lost time and a sense of control or has Mr. Robot taken control?

Dom sees Red Wheelbarrow on the map where Wellick is tracked and decides to take a trip and head out to lunch.

Irving meets with Wellick and breaks the news to him that he’s not needed anymore. Wellick is fearful and thinks he’s going to be killed but instead is handed an ominous letter from Irving to read and is instructed to burn it quickly after reading. And as always Irving is calm AF in his delivery.  I just need to know if this guy ever gets angry.

As Elliot continues to blackout and lose more time, he finds himself getting into a physical altercation with Mr. Robot. Meanwhile, Dom is scoping out Red Wheelbarrow waiting for Wellick to come out.  Ironically enough Santiago places a call to his mother concerned for her safety and instructs her to stay home for the rest of the day and not to leave the house.

Angela is on the subway, and some random guy wearing an fsociety mask robs two old ladies at gunpoint.  When he turns to Angela and demands her to give up her purse she stares at him back emotionless and keeps her purse clenched to her side.

Wellick burns his letter and throws it in the trash dousing it with alcohol which ignites a larger flame. The restaurant fills with smoke which alerts Dom and she does down the area of the site where the fire is—which is where Wellick is staying—and stumbles onto his lair.

Darlene pays Angela a visit and tells her she screwed things over with Elliot. As it turns out, Darlene was onto Angela all along. When Darlene mentions the building being blown up with people in it; Angela assures her that people will be evacuating the building. Darlene asks Angela to convince her not to turn her in. Angela doesn’t care since she believes in what she’s doing and she knows it’s right.

Elliot writes on Wordpad to Mr. Robot that there are no paper records in the building and that he’s being played. He asks Mr. Robot to help him open the door so he can go into the data center and use the hydrogen lift to stop the bomb. It’s an intense moment, but Mr. Robot came through and opened the door for Elliot.

The bomb is stopped and there will be no explosion.  Stage 2 is officially canceled. We can all go home and this is our happy ending.

C’mon y’all this is Mr. Robot are you serious?

Elliot wanders down the street and sees people staring at their phones and sobbing and he wonders does everyone know something that he doesn’t? There’s an electronics store with a display of TVs in the window and a crowd surrounds it.  On the TV, is a report of an explosion in 71 E Corp buildings across the country and the death toll is in the thousands.

Quote of the Night