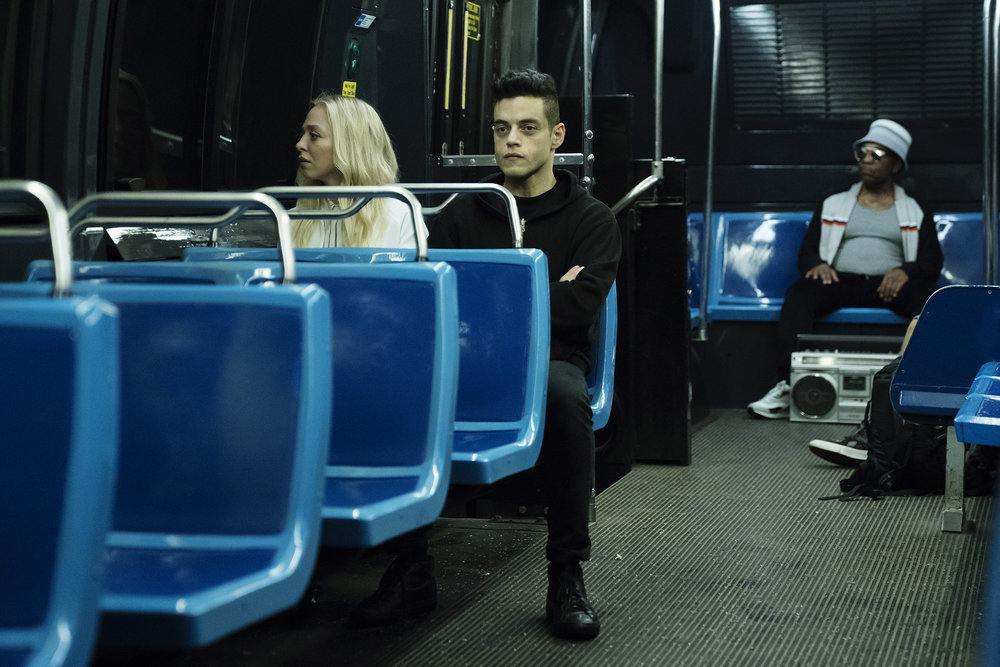 Welcome to season three of USA’s Mr. Robot, I’m your host Jamie Broadnax.  I’ll be your guide on this journey during this season and together we will ride this wild roller coaster ride together and experience one of the most notorious shows that intentionally screw with your mind from one episode to the next.

Are you ready to take this trip with me? Ready. Set. GO!

Season three opens with an establishing wide shot of the restaurant Red WheelBarrow BBQ. It’s their grand opening and who do we see as one of their customers?  It’s none other than the newcomer to the Mr. Robot cast, actor Bobby Cannavale. It’s a scene that we can all empathize with.  Our unnamed new character has a punch card and with his final punch, he’s offered a free milkshake as a reward.  As it turns out, he can’t redeem his sweet treat until his next visit.  When our mystery man asks what qualifies as his “next visit” he suddenly receives a frantic phone call. We don’t hear the caller on the other end, but we hear from our new character that there may be a dead body.

With a matter-of-fact tone he says flatly to the cashier, “when we lose our principles, we invite chaos”.

Cut to a bleeding Elliot Alderson and a distressed Tyrell Wellick as well as our new guy in the previous scene who just came from Red WheelBarrow BBQ.  Now we see it was Tyrell at the other end of the call and the suspected dead body is Elliot’s.  As our new friend slips on surgical gloves and walks towards a dying Elliot, he’s as cool as a cucumber while Tyrell repeating incessantly “he can’t die, he can’t die” has completely lost a handle on the situation. This new guy (this is Bobby Cannavale remember) takes a photo of Elliot with his camera phone. In the following scene our new guy is on his Bluetooth talking to someone informing them that Elliot is in surgery, he hops into a car worth 4,000 Ecoin and writes a name within the palm of his hand with a pen.

That name is Angela Moss.

We now cut to nuclear power plant and we see our favorite Dark Army member Whiterose walking with a colleague and swiping through images on his iPad of Elliot’s body.  The same photos were taken by the Red WheelBarrow BBQ customer and super calm clean-up guy that was talking to Tyrell.  Well, now it turns out that he was talking to Whiterose on that Bluetooth and the dots are slowly connecting and it’s only 7 minutes into the episode. The heat turns up in this story arc when Whiterose reveals that Elliot’s father once worked for the Dark Army unbeknownst to Edward.  Now several years later Elliot is working for Whiterose also without his knowledge the same way his father did.  Elliot’s intent on destroying E-Corp and his engineering work has emboldened Dark Army that has helped set their plan in motion.  Elliot’s unadulterated and focused rage was their guide.  Whiterose explicitly says that once the work is completed, Elliot can die for their cause just like his father Edward did.

Cut to opening titles and an extreme close up of an eye opening wide.  It’s Elliot asking us “are you still there?” We see Elliot waking up in his bed and Angela walks in.  Elliot doesn’t seem to know where he is and it appears he has lost some of his memory.  When Angela tells Elliot there’s been a blackout in the city for over a week now, she tells him some people brought him to that room. When Elliot probes Angela for more details, she reveals that Tyrell Wellick brought him there, and this triggers Elliot’s memory that what happened was real. Angela says she was coerced and was stopped by the Dark Army and a man was sent to her apartment.  Elliot freaks out ready to call the authorities and Angela informs him they will kill her. Elliot says he has to find Tyrell and stop him from trying to blow up E-Corp’s recovery facility.

Dressed in a sweatshirt that says “Property of Josh Groban”, Elliot hits the streets on his way to find Tyrell.  Elliot feels different now.  That ever looming presence that is Mr. Robot is no longer felt.  Elliot now wonders if its possible if the bullet may have killed Mr. Robot and not him.  Elliot heads back to his East Broadway apartment and as he opens the door Darlene appears.

Darlene tells Elliot that Cisco is dead and that the Dark Army turned on them.  When Darlene tells Elliot she knows about Stage 2 she asks him directly what that is. The phone that was hacked had a hot mic that picked it up exposing Stage 2. Elliot tells Darlene (and us) that he created a backdoor inside E-Corp (Evil Corp) building housing within their recovery program which contained access to paper records, deeds, titles, and loan documents. Darlene is upset that she wasn’t informed of this plan and asks if it was because she wouldn’t go along with blowing up with the facility.

Elliot still believes he can close the backdoor and stop it and asks Darlene for help. Darlene and Elliot check out a hackerspace with a dedicated fiber connection.  Teams from all over compete to solve challenges from reverse engineering, forensics, and protocol exploitation.  Darlene spots two men who we suspect may be a member of the Dark Army. Darlene has a mini-nervous breakdown and suddenly she looks up and the Dark Army is upon her.  They grab both Elliot and Darlene and lead them out of the building. The two men ask them to meet at a location.  As Darlene and Elliot walk down the alley, a yellow cab approaches and our mystery friend is back; he’s the driver of the vehicle.  He tells them to get in and informs both that they’re being followed by FBI. Elliot and Darlene reluctantly get into the cab. Elliot is instructed by our driver to read the license plate of the vehicle that’s been tailing them.  Then he places a call to Lone Star Center and identifies himself as Detective Robert Abernethy and reports the vehicle as stolen and driving erratically as well as hitting pedestrians. Once he completes giving the VIN number to the Lone Star representative, the car’s blinkers turn on and immediately stops. He social engineered the vehicle to a complete stop.  Badass.

And our friend asks, “who wants barbeque?”

We’re back at Red Wheelbarrow BBQ and Elliot is confronted on his activities at E-Corp.  Elliot says he’s calling the whole thing off and it’s non-negotiable. And Elliot calls off Stage 2 and our mystery guy leaves the restaurant.

Elliot then goes into a self-reflecting diatribe about F-Society, E-Corp and the state of our humanity that lives and dies on technology.  He simply asks, with an image of Donald Trump intercut with his poignant statement:

“What if instead of fighting back we caved, gave away our privacy for security, exchanged dignity for safety, what if we exchanged revolution for oppression and what if  we chose weakness over strength?”

Elliot later comes to terms with the fact that he is the one to blame and this is all of it is his fault. Elliot reaches back out to Angela and asks her to keep an eye on him. And it’s true, Angela does know Elliot better than anyone and she’s the only person he can trust at this point. Elliot reaches out to kiss Angela and she rejects his advances. Elliot tells us Angela’s MO is that she doesn’t love the people that love her, she loves people who don’t love her.

Angela wakes up in the middle of the night to see Mr. Robot in the shadows. She tells him she needs to get dressed and they will go. Angela then tells Mr. Robot that Elliot closed the backdoor along with Darlene.  So now the tables have turned, Angela is taking orders from Mr. Robot. Angela talks to Detective Abernethy (at least we think that’s his name) and Mr. Robot is in soft focus in the background.  This tells us that only Angela can see and hear Mr. Robot at this time.

Mr. Robot then talks directly to Tyrell, and Tyrell appears to be scared of him.

Then Angela talks to Mr. Robot who she sees as Elliot. WHAT THE HELL IS HAPPENING HERE??? Mr. Robot doesn’t trust Angela and asks why she’s doing all of this.  To which she replies that Evil Corp killed her mother and now she wants justice for her death. Angela then says Whiterose opened her eyes to the damage that was caused.

And the lights turn back on and the blackout is over.

This episode was one hell of a wild ride.