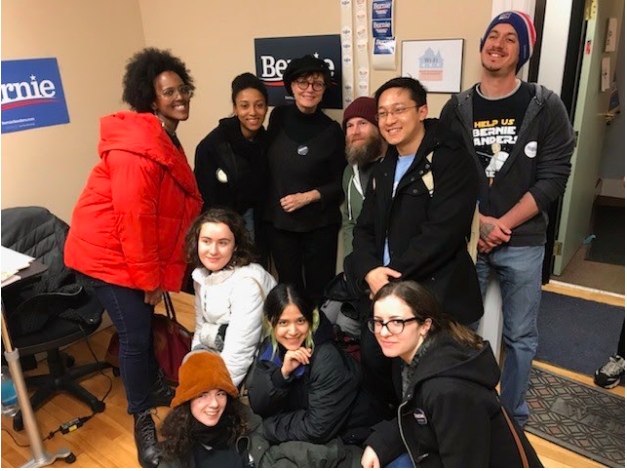 Sure, I’m a Black woman, but I am completely dedicated to the election of the most dynamic, anti-imperialist, anti-capitalist, candidate of my lifetime — Bernie Sanders.

This was not a decision made overnight, but it comes from a lifetime of feeling that something was off in this country.

I grew up in a diverse community in the Chicagoland area, and compared to most people, even those around me, I grew up in a very progressive, hippie household. My mother was an anthropologist, and I think she has been a socialist her entire life. My father was a union carpenter, into singing protest music from the 60s, and he might not call himself a socialist, but he definitely values people more than any material object or any form of capital. As a small child, I never felt like we were struggling because my parents worked so hard to dote on me and fill my life with meaningful experiences — bike rides in the woods, listening to music together, soccer practice, trips to the library and music lessons. They even built me beautiful, detailed, handmade things like a yellow dollhouse that took them months of labor.

Both my parents struggled with their health–my mother had two brain tumors and breast cancer, and my father struggled with alcohol addiction, which he used to self-medicate because of a motorcycle accident that left him bedridden and in chronic pain. He later became diabetic. They, of course, had to struggle to work through all of their physical pain and fatigue because of our country’s unethical healthcare system.

My parents struggled in their careers — they are and have always been two of the most exceptionally brilliant and creative people I know. I think deep down they felt pressure to make money and provide but because they are so passionate, sought work that was spiritually important to them. Capitalism makes it so we all feel an internal struggle between following our passions and following the money. My mother hopped from job to job, teaching at colleges, working at banks, in sales, unemployed, until she started her own meaningful non-profit organization, that she would spend decades trying to get all of us to understand how meaningful it was. I regret how long it took me. We, every one of us, exposed to her beautiful work, were stupid and didn’t understand. My father left his union job to try and do his own contracting work, in the hopes of more money but less stability. He found some success in this, but he was always more generous than capitalist. He really respected one of his boss’ once, who consistently gave him bounced checks. He liked him and the work too much to quit.

Not every kid knows about bounced checks, but I did. I would love to say that through all of this, I was a grateful daughter. That I supported my parents through their obvious struggles. But I wasn’t. While I learned from and believed in my parents’ progressive values, I also bought into capitalism and the American dream, which told me to dream about material things and that convinced me that we struggled with money because my parents were not hardworking and that there was something inherently wrong with them. This was reinforced all around me. My piano teacher would often receive bounced checks from my father, and she’d look at me as if I were covered in grime, that I was filth. She would yell at me during lessons, and when I froze up during recitals, she would refuse to bring me my music. She, like many I would encounter, hated the poor.

Of course, any money insecurities I experienced as a child, were often tied to race. I associated wealth with whiteness, and my diverse classmates made it pretty clear to me that poverty and Blackness were synonymous in their world view. Indian classmates made comments about my ugly hair. First-generation immigrant classmates made nasty comments about our small old home, and I learned to hide in pretty clothes, I couldn’t afford and with cash at lunch when I qualified for free lunch, and some days when I couldn’t get cash, just skipping lunch altogether, almost to punish myself for my lack of capital.

I began working as a young teen, and even though I had more than enough, and the most exceptional, selfless parents and extended family, I could ever imagine, I demanded more of them. They provided and met my ridiculous demands.

It wasn’t until high school, and I did community service for a summer in New Orleans after Katrina, at the age of 15, almost 16, that I began to think critically about capitalism. I did not yet have the language, but I knew there was something off when I saw beautiful, intricately, unnecessarily, detailed mansions facing Audubon Park, seemingly untouched by the storm, and that just miles away, in a totally impoverished, Black community, there were vacant, destroyed homes marked with Xs, signifying the number of casualties. The State protected properties and the rich and sacrificed the poor for the preservation of adorned buildings, probably built by enslaved people just a couple of centuries back, whose descendants, those few miles away, drowned after being abandoned by the country they built.

I then went to college at an elite liberal arts college on the east coast. I had not known what wealth was until this point. My classmates had mostly attended private schools, had totally different vocabulary than I and wore brands of which I had never heard. They were overly-confident and arrogant. Many were well-spoken and demanded respect wherever they went, but were seldom particularly intelligent. They didn’t need to be. Our country validated that they were brilliant simply because of their wealth. Some of them rarely thanked the workers in the dining hall, and they were obsessed with knowing my parents’ occupations. My college was fairly progressive, and this certainly was not everyone, but enough so that their elitism was impactful.

College gave me a number of international experiences that also enlightened me to the particular Americanness of capitalist greed and exploitation.

After college, I became a public school teacher in some of the most under-resourced communities, and I learned how diabolical capitalism truly is. I served families who had absolutely nothing but the scars left behind by generations of the violence that is poverty and white supremacy in America. I cared for students who lost parents to addiction, who lost family members because of inadequate healthcare. I lost children to gun violence, which is a symptom of crippling poverty. I organized my communities, mainly against anti-Black violence and police violence, and I learned that police exist only to protect capital and to reinforce white supremacy.

I share all of this to say, that the older I get, the more reason this country gives me to despise its particular brand of white supremacist capitalism. I often have felt alien to my peers, who worship celebrity, capitalist characteristics like grit and aspirant stories of heroes who started from the bottom and ended up on top of other subservient workers. There are no winners in capitalism, and I began to notice how unhappy even my richer friends are. Going to college, too, even made me feel like I abandoned my blue collar roots, and that I had to choose a side. Searching for something else, I spent more time abroad, mainly on the African continent, where arguably socialist ideas originate.

Back in America, I was beginning to feel alone, depressed and alienated from my peers, until this Bernie movement that has been growing since 2015.

I spend at least four nights a week hosting events or attending events for the Bernie2020 campaign. It’s been absolutely inspiring. This movement is massive and filled with people who share not only some of my life experiences, but share my anti-capitalist sentiments. At first, I feared the “Bernie Bro” narrative, and that my experiences as a Black woman, would be swept under the rug,  but it’s simply not true. Every week of organizing, I’ve met strangers from all walks of life who support Bernie Sanders, and who understand and seek to understand structural inequality, whether it be tied to race, class, nationality, gender, etc. They are kind. They are tender. They are loving. They are giving. They offer rides, when they are inconvenient. They bring food when they expect people will be hungry. We, in this massive movement, have become an ever expanding family dedicated to making this country the country we have always deserved but never experienced.

We who grew up working poor/working class grew up in a society that told us that we were not good enough and that we were doing something wrong. We are good enough. We always have been, and our value is not tied to our careers and what we are able to produce for the billionaire class. I am so proud to be a part of this #NotMeUs movement — the only radically, progressive and meaningful movement, backing the only candidate, Bernie Sanders, who can and will defeat Trump and who will radically change this country. I cry after every event I host, after every trip canvassing and after every new positive development in this campaign. The tears come from the awe of it all, but the tears are also for all of those directly impacted by capitalism in my life, who struggle, and for those, I do not know, whose struggle is equally upsetting to me.

I think about 12-year-old Tess. She just wanted to be liked, like all 12-year-olds. She thought that meant she had to have a brand name bag, a shiny house and that the best adults were the monied adults. She was wrong, as kids and adults sometimes are. She deserved to grow up in a world that saw her as her parents saw her — curious and loving — Perhaps she then would have seen herself that way.

We organize for all the young people, and our former young selves, for a world that values us. We organize for the ones we love as much as for those we don’t know. Personally, I also organize to honor my family and the socialist values they always instilled in me. In 2018, Democratic Socialists of America (DSA) membership had already reached the numbers of the Socialist Party in the 1920s and has only grown with the campaign. 2020 is the time for this people-powered movement, and we will win. We have no other choice.