It’s not too surprising that Michael B. Jordan’s portrayal of Erik Killmonger in Marvel’s Black Panther has been comparable to many supervillains of cinemas past. What made his story so compelling was its relatability, which made him more appealing to the viewers. Across social media, many people made it clear Killmonger’s character was absolutely right in his thoughts about Black people, had some valid points about Wakanda, and that his actions were justifiable. But honestly, was he?

Killmongers vision was liberation for all Black people throughout the world. Having lived with racial bias, oppression, and the extensive history of oppression to Black people at the hands of white supremacy throughout history, Killmonger wanted justice for his people — by any means necessary. Wakanda had the resources to change the way of the world, and he knew that. However, his methods of it all were fueled by power-hungry patriarchy, wanting to be in control of the throne and not worrying about who he must take down to gain this control. His way would have led to imperialism throughout nations.

Lupita N’yongo’s character, Nakia, had the same vision for people throughout the world. Nakia was a spy for Wakanda, helping to protect her country as well as the freedom of small nations. She expressed early on her ideals of Wakanda being able to offer help to other countries, and rid of their old methods of just protecting themselves. Nakia wanted justice for those in bondage, just as well as Killmonger himself, except her way wasn’t filled with dominance or control of the land.Agent Ross (played by Martin Freeman) even explained Erik Killmonger was just “doing what we (the American government essentially) trained him to do,” which included his burning Wakanda’s resources (the heart-shaped herb), overthrowing the leader, and not caring who he had to kill to get the power he craved. 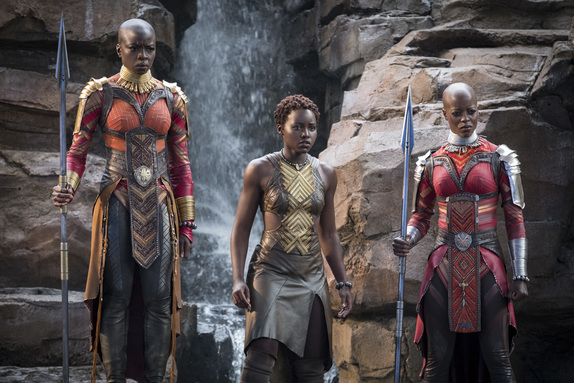 Nakia, on the other hand, only cared about the safety of her people, as well as other oppressed people throughout different nations. She did not care to be in power, even mentioning at one point that being Queen of Wakanda was not something she really wanted.

So, all the people saying Killmonger was right, aren’t entirely incorrect. And, living in our racially-based society, it is easy to glamorize wanting someone to step up for us and begin the revolution for our people. However, it’s Nakia, Shuri, and even Okoye who should be the revolutionaries we strive and idealize from Black Panther. Killmonger’s dominance and imperialistic ideals, as well as racial dividing, isn’t something to be celebrating or commending.