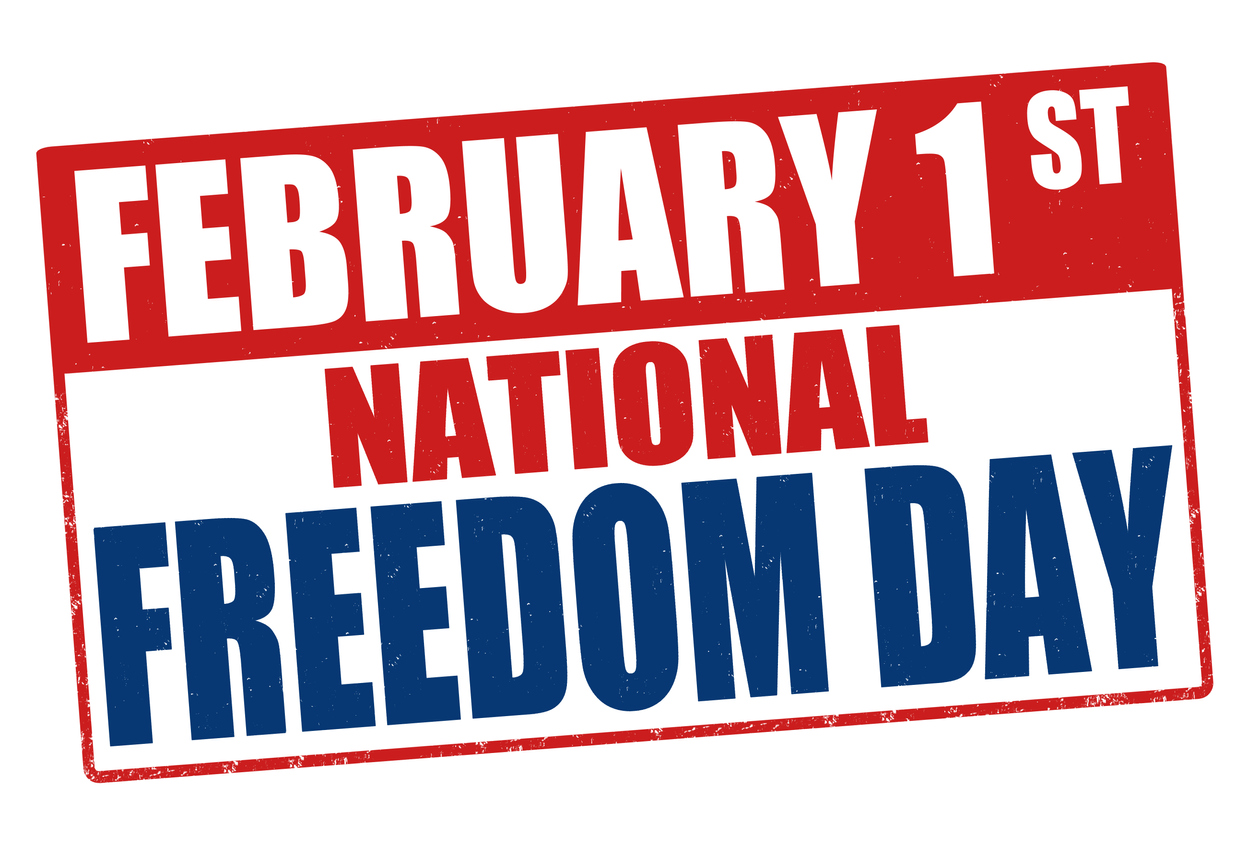 National Freedom Day was founded to celebrate the freedoms we enjoy as United States citizens, with the hopes of promoting good will, fairness, and equality — freedoms that we all have the right to enjoy.

Major Richard Robert Wright Sr., a former slave, fought to have a day when freedom for all Americans is celebrated. When Wright got his freedom, he went on to become a successful businessman and community leader in Philadelphia. Wright chose February 1 as National Freedom Day because it was the day in 1865 that President Lincoln signed the 13th Amendment to the Constitution.

This amendment ended slavery in the United States. Wright gathered national and local leaders together to write a bill declaring February 1 National Freedom Day, and President Harry Truman signed the bill in 1948 making it official.

According to Webster’s dictionary, “freedom” is defined as the quality or state of being free: such as; the absence of necessity, coercion, or constraint in choice or action. For many, the idea of freedom is rooted in the Declaration of Independence and protected in the Constitution. But freedom for Black people always seems undefined. Our freedom is still being fought for through struggle and social movements.

On July 4, 1776, the Declaration of Independence announced that the British colonies in America were free from the rule of Great Britain. With this declaration, Americans wanted universal human rights, including life, liberty, the pursuit of happiness, and the right to self-government.

Thomas Jefferson’s draft of the Declaration of Independence criticized the British king and included mention of the slave trade: “He has waged cruel war against human nature itself, violating its most sacred rights of life & liberty in the persons of a distant people, who never offended him, captivating and carrying them into slavery in another hemisphere…”

After the Revolutionary War, a new constitution was drafted. They created a Bill of Rights guaranteeing personal freedoms to every citizen.

Unfortunately, the men who founded America were also men of their time. The bill left whole groups of people — women, Native Americans, and enslaved Black people — out of their plans. Because of this, there have been centuries of oppression.

Frederick Douglass spoke at an abolitionist meeting in 1841. His stories about life on the plantation turned thousands of skeptical white Americans into active abolitionists. In 1852, Harriet Beecher Stowe wrote Uncle Tom’s Cabin — a story about the lives of Southern slaves. Her emotional descriptions made many sympathetic readers change their minds about slavery.

When Lincoln got elected, Southerners feared he would end slavery everywhere. One by one, Southern states seceded from the Union and formed their own government — the Confederate States of America. Abraham Lincoln put his Emancipation Proclamation into effect on January 1, 1863, declaring that all slaves in rebel states would be “forever free.”

The concept of personal freedom is different, depending on who you talk to. You would think, in 2022, that all people would be able to enjoy the same basic liberties and rights. However, that is not the case.

When I hear the word “freedom,” my mind immediately goes to Dr. Martin Luther King’s I Have a Dream speech. It is one of the most iconic speeches of our time that encapsulates his legacy. One reason is because the speech itself, as well as the the March on Washington were aired on television. It became famous because so many people saw it. The timing of the speech was also important. It was a violent time in the United States, as Americans watched televised police brutality in Birmingham, Alabama. When Dr. King said, “Now is the time for racial equality…” that message was the foundation of what everyone needed.

My favorite part of the speech is the “Let freedom ring…” section. Dr. King transitions to letting freedom ring from more obscure mountaintops — like the Rocky Mountains of Colorado — to more specific mountaintops of Stone Mountain in Georgia, which is a racist monument and representative of prejudice and injustice. In a sense, he moved from a generalization to a specific place where activism was necessary.

I believe if Dr. King were still alive, he would talk less about politics and more about culture. He would raise questions about the ethical and cultural changes necessary to make equality a practice now rather than being about something political we can strive for later. His dreams might be more about the ability of the United States to fight racial injustice internationally as well as prison reform and economic equality here at home.

Why National Freedom Day Is Important

This day is significant because it was originally proposed by Wright, a former slave. He pushed Congress during a time of war and unrest in this country, until the declaration was signed into law. He was the catalyst for that day.

In addition, celebrating our freedom is the perfect way to start Black History Month. Taking time to appreciate all the freedoms we enjoy should put a positive light on all that we do have. Yes, we have a long way to go. However, we enjoy the freedom of speech and freedom to practice whatever religion we choose. There was a time when we couldn’t do either of these things.

How to Observe National Freedom Day

What freedoms do you appreciate the most? It may be having the ability to be friends with people of different backgrounds and races or choosing the person you want to marry. Share photos, quotes, or articles on your social media platforms with the hashtag #nationalfreedomday.

Read a book or watch a documentary to understand the lives and times that brought about the Civil War and ultimately the emancipation of slaves. This will help to understand the founding of National Freedom Day. It will also provide some perspective on the freedoms many are still fighting for. I see this day as one on which to be thankful for how far we’ve come while also having the strength to press for more.

“When we let freedom ring, when we let it ring from every village and every hamlet, from every state and every city, we will be able to speed up that day when all of God’s children, black men and white men, Jews and Gentiles, Protestants and Catholics, will be able to join hands and sing in the words of the old Negro spiritual, Free at last! Free at last! Thank God Almighty, we are free at last!” —Dr. Martin Luther King, Jr., excerpt of I Have a Dream speech