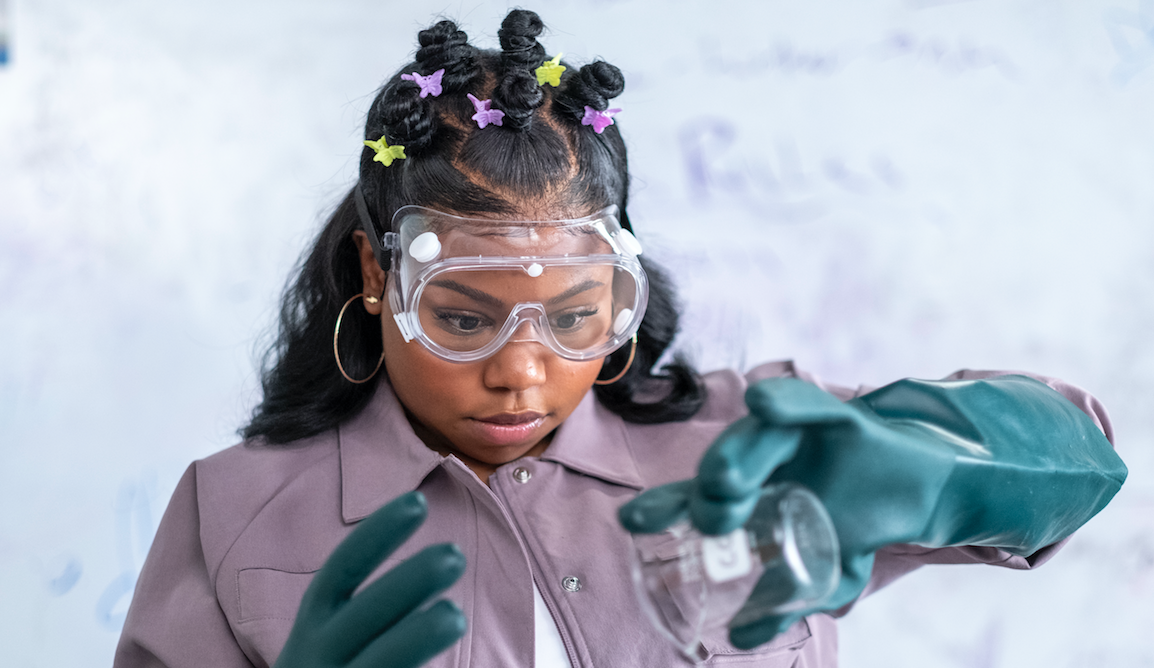 Co-created by Kevin Iso and Dan Pearlman, Flatbush Misdemeanors is a comedy series centered on the complex lives of characters residing in Flatbush, Brooklyn. Now that Season 2 is available to watch on Showtime, BGN had the opportunity to converse with the lovely Kristin Dodson who plays Zayna, a strong and outspoken high school student whose uncle, Drew (Hassan Johnson) conflicts with the lives of the show’s lead characters, childhood friends Kevin and Dan.

What attracted you to this role? Particularly, a very young role, and one that takes place in the real Brooklyn?

Honestly, I feel like it was divine. I’m born and raised in Brooklyn and am also of Caribbean descent, so Zayna just fits like a glove. The language in the script just flows; it’s real and organic. When I read the script, I was like “Who wrote this?!” It was really cool because I had not seen anything like that before. Nor had I had the opportunity to play such a complex character.

Even though Zayna is young, there is something so deep about who she is, what she likes, what she doesn’t like, her whole background, where she comes from. It makes it very appealing. It’s a testament to the writing.

Another thing I love about your character is your friendship with Dami, played by Zuri Reed, and how it completely exceeds the viewer’s expectations about how complex it is. What can viewers see in Zayna and Dami’s friendship this season, especially after the question mark of the first season’s finale?

Oh man! Well, their bond is tight as ever. You’ll definitely see in one of the episodes where she Zayna makes Dami a necklace that says “Zayna and Dami Forever.” We still get to see that sisterhood relationship.

But we also get a new best friend as well: Amaya, played by Angella Katherine. That dynamic is hilarious because Amaya is with the sh**s, and very much like, “I’m a bad b****.” She’s very much Brooklyn.

My wish and hope is, if we get another season, that we get to see all three of them [Dami, Amaya, and Zayna] together!

In the trailer, we see Zayna and Drew spend time together, which I was not expecting after last season. How did you and Hassan prep for this specific season given how much your characters have been through together?

I think as an actor you know that all characters are very complex. I can’t speak for Hassan personally, but I can say that we both have so much love for each other and Zayna and Drew have a lot of love for each other. They just want the other one to do what’s right.

Whether they’re right is up in the air, but when both actors are leading with definite care and love, it makes it so much easier for us to navigate this world where these two characters live.

Did I hear correctly that you are getting close to completing your MFA?

No, I already got it!

Long time coming. I’m still kind of shocked! It’s a really big accomplishment. I’m the first in my family to get a masters. Not just any masters, but from an Ivy League [Columbia U, NYC].

Girl! Dunkin’ Donuts, if you wanna sponsor me, hello! [Laughs.]

But all seriousness, my school was super excited and they were more than willing to be flexible with my schedule. I’m jumping from a Zoom class meeting, then jumping into a rehearsal, then jumping into set. We have something called “showcase,” so that was going on.

Thankfully, the lovely Showtime and Avalon gave me time off to do a whole showcase, which was great. That’s the opportunity that you get to be in front of the industry reps and get seen.

What surprised you this season of Flatbush?

That Zayna gets a little boyfriend, [and how that gave] the opportunity to show a softer side of Zayna. It is so refreshing to see that not all Black girls are these harsh stereotypes.

We get to see her soft, in love, and unsure. There’s a whole scene between her and Amaya where she says, “I think I like him. Do I want to have sex with him?” It’s all the things that teenage girls go through. It is so beautiful to see that, and the director [Jordan Cam for that episode] did the damn thing.

Can you tell me more about the fashion this season?

Yo! The costume designer [Dajia Milan] and her assistant, Kareem, did their motherf****** thing. The fits are always bomb as f***. This season, we have elevated. We get a chance to see Zayna’s curves!

When I watch a lot of shows, sometimes there’s this idea of what teen youth look like. What I love about our show is that we have a variety of shapes and figures. I love that we get to see that more with Zayna and see it morph and grow as each show goes and goes. We get to see her mature and develop, and her fashion does the same thing.

Which outfit was your favorite?

In episode 10, Zayna has this gorgeous denim outfit — you gotta wait for the whole season to see it — designed by Brookland.

Because each outfit gets better and better!

Right! I’m waiting to see if there’s going to be a panel on the fashion of Flatbush because we’re doing the damn thing. Brooklyn all day.

I would really love for Nylon Magazine to do a whole cover story about that. Especially because we’re growing this season in a lot of retro fits and styles that are coming back. A lot of it is heavily influenced by Black culture, specifically Black female culture. Nails! Zayna and her nails are another big thing this season. I begged the producer for [my favorite] hairstyle. Shout out to Rashida Bolden with the makeup!

Season 2 of Flatbush Misdemeanors can be seen on Showtime.