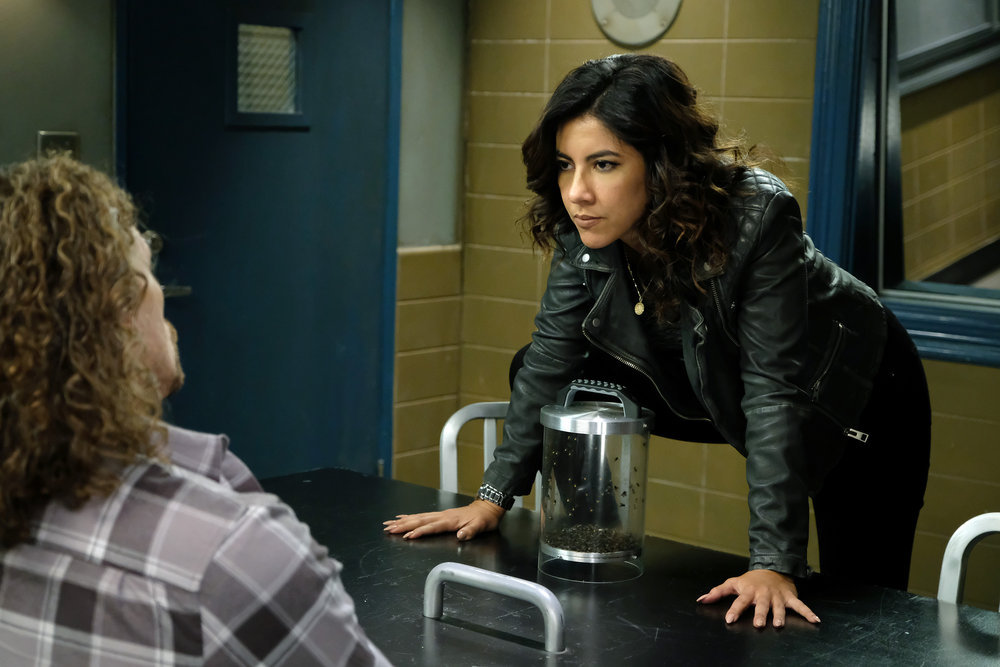 Will the real Detective Rosa Diaz please stand up? Her portrayer, Stephanie Beatriz seems pleased that her Brooklyn Nine-Nine character is finally getting that chance.

For six seasons, Beatriz has played up detective Rosa’s sexy aloofness but not much more. The actress admits that while this has made the character more intriguing, audiences know not much more about Rosa now than they did when she was first introduced.

Beatriz attributes that to just getting lost just enough inside the character that she doesn’t have to play the funny — but rather lets it go where it goes.

BGN joined in on a round-table interview with the actress discussing everything from Andy Samberg’s attention shortage and Rosa’s sexuality, to directing her first episode and Jussie Smollett.

In sitcoms these days, it seems like even the comedic actors are playing comedic caricatures of

… themselves. Yeah, I think it’s because right when I auditioned for Brooklyn Nine-Nine, I had been doing theater for six years and I’d really never done any television before, except a guest star here and there and I was used to just disappearing into the character. That’s sort of my thing.

So it’s been really wild to see people meet me in real life. It’s fun.

A recent episode focused on you and Jake and the Longtree Murder.

That was a great episode.

Does Andy (Samberg) play a version of himself?

Andy is really brilliant and not only is he a great writer and a great performer, but he is also very socially conscious and aware that our show has a large reach. In particular, how we are talking about groups of people and what we are saying about each other and the jokes. I think you can see that as the seasons have evolved, the social consciousness of Brooklyn Nine-Nine is what a lot of young people gravitate towards.

I think a lot of that has to do with Andy and his own social consciousness and wanting to raise the bar. But he is a little A-D-D, maybe I should rephrase that. I think Jake Peralta may have undiagnosed attention deficit disorder because he’s really brilliant but he can’t stay on track. But in not being able to stay on track, he’s able to solve really complex cases. I think Andy has an attention span that gloriously allows him to bounce from one thing to the next. He’s like a moving train. He is always, always thinking. He’s twenty steps ahead of you if not more.

Discussing social issues, your character, most recently, is the biggest part of that.

Yeah, Rosa coming out as queer and bisexual was a big, big thing.

Then this season I directed an episode (“He Said, She Said,” aired 2/28/19) and the episode is, that this season Jake and Amy are dealing with the #MeToo movement. It’s a case of he is saying something and she is saying something different. And it’s a case of who do you believe? Watching these two characters explore that as partners but also as a married couple is really, really cool and, very different for a situation comedy.

So is Rosa’s sexuality going to be explored?

Yeah, it has been but it will be more so this year. Rosa gets a girlfriend and it will be exciting to see who she is, what she adds to Rosa’s life, whether or not Rosa can handle it.

This is one of the most closed up, walled up characters I’ve ever played. So it will be interesting to see whether she can let herself really fall in love and go in. Yeah, so you’ve got to go in when you go in, otherwise, it just falls apart.

Yeah, if you break it down, Rosa has literally had the same hairstyle every episode for the whole show, for five seasons. So to let somebody touch her hair. One of the most intimate things you can do is shampoo your lover. She’s letting that happen so it’s a big step for her. It’s so not something she would normally do and yet she’s doing it for this person.

One of the coolest things about moving to NBC has been their trust in allowing the writers to do these — I don’t know what you would call them — almost like a pod episode or an episode that feels different than the other episodes of our show. Like with Rosa and Jake in the apartment, trying to figure that out.  Like the Hitchcock and Scully episode. They are taking these risks that we’ve never taken before and I think a lot of that has to do with NBC.

Great they are very, very supportive. I think they are really psyched with the episodes. I heard they like the episode I directed so that’s  Yeah, they’ve been amazing.

I noticed that you did a piece on your Instagram encouraging Jussie Smollett. Do you think it’s going to be ok for him now or have you changed your mind?

I would say that the entire situation seems really unfortunate and I am hopeful that the Chicago police are able to do their job to the best of their ability with all of the difficult roadblocks that they seem to have right now.