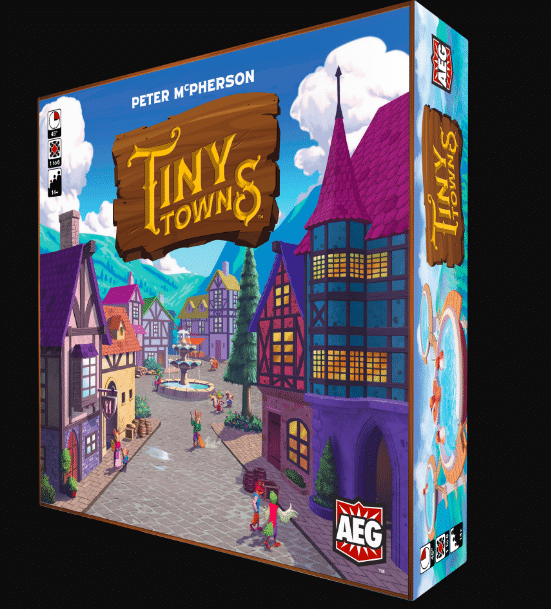 In years past, on the Public Broadcasting Service there was a show featuring painter Bob Ross known as The Joy of Painting.

Ross was constantly going on about his “happy little trees.” I like to think in the shadow of that forest lies the premise for the game Tiny Towns. Created by Peter McPherson and distributed by the Alderac Entertainment Group, Tiny Towns is a no-tech version of SimCity, where resources are gathered in patterns defined by a series of construction cards. Completion of a defined pattern allows the construction of one of seven structures. Each structure is worth a certain number of points as defined by the construction card. The tiny town with the most points is the winner. 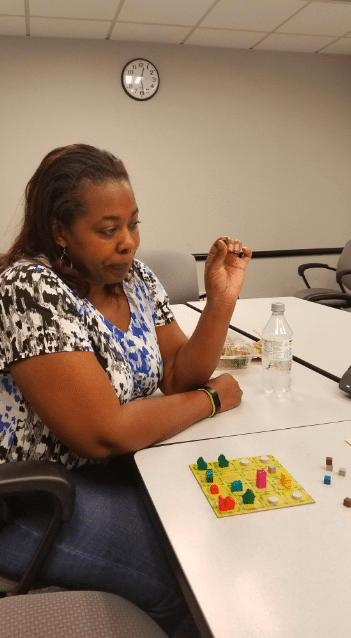 The game is started by the selection of seven construction cards. The cards are randomly selected from the deck. The cottage card is always used, but then only one card per type of building is selected, except for the monument card. The monument card is unique to each player. At the beginning of the game, two monument cards are given to each player and they are allowed to select one. The rest of the cards are no longer in play. Each player is given a payer board, which displays a 4 x 4 town grid. One individual is selected as the “Master Builder” and is given the white hammer. The Master Builder is allowed to select one of five resources (wheat, wood, glass, stone, or brick). Each player must then place a resource on their town grid. After placement of the resources by all players, the role of Master Builder is passed to the next player in the counter-clockwise direction. Once a pattern from one of the construction cards is completed, a building can be placed on any grid space that held a resource used to complete the building pattern. When no more buildings can be constructed on your town grid, or all of the grid spaces are full, you may score your town but may no longer select resources as the Master Builder. The selection of resources continues until all towns are completed. Scoring is determined by the construction cards. The tiny town with the most points wins. 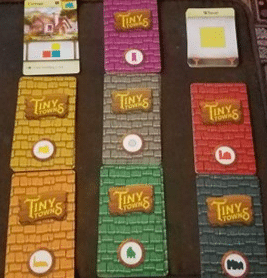 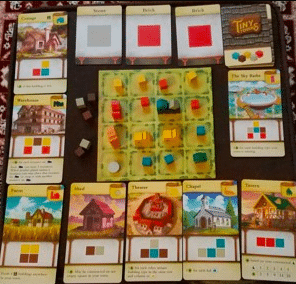 Having played both modes, I found the solo mode rather instructive in improving my gameplay. It is essential to gain comfort in being able to select the right pattern and adjust as necessary based on resource selection. Pattern selection can be tricky, as you are allowed to mirror the pattern to construct a building, but not to rearrange the order of the resources needed to build it. Additionally, the resources may not come in the order or quantity that you need to complete a structure, so there is a benefit to thinking several steps ahead to ensure proper resource and building placement. However, also stay mindful that some buildings are worth more than others and you can very quickly run out of real estate if you are not careful. 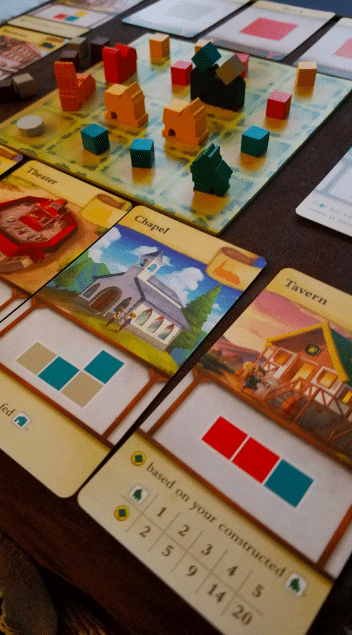 The first time out of the box, the setup can take a bit of doing, but like with anything it gets quicker the more times you play. The duration of a game also varies with the relative comfort with the rules and gameplay. When playing the solo version, I played three rounds in about an hour. Playing with three players, the first time took around 40 minutes, but I can see this going to 30 minutes easily or going longer as the building skills of the players increases. Be aware that the passing of the white hammer should not be completed until all players have placed their resources.

For those of you who play board games, the base pattern placement for Tiny Towns is similar to Baren Park, with the ability to collapse a pattern into a building but not to expand your grid. Plus, the scoring is different. It is, however, quite similar to Realm of Sands. With Realm of Sands, though, you have an idea what resources will come up as there is no Master Builder since the available resource patterns are arrayed around the board in addition to the building pattern cards. 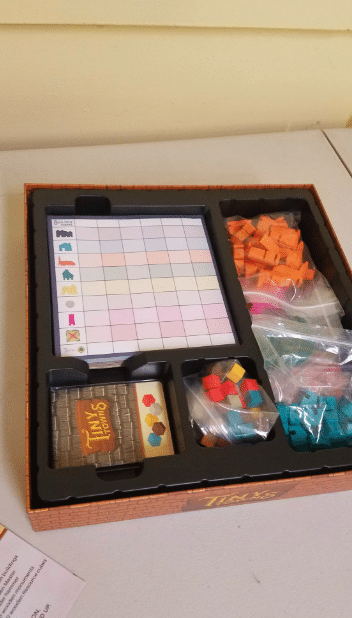 The instructions suggest 14 and over. I think this recommendation is reasonable given the various strategic levels for this game. However, that level of play, while useful, is not required, which is why I would recommend this for gamers who are a little younger, especially any youngster with an aptitude for the forward-looking strategy gained from chess. Having said that, I can see playing the solo version cooperatively with a younger gamer as the complication of the other boards and opponents resource placement is not an issue.

Tiny Towns is available from AEC Games, at your local gaming stores, and via various online distributors for around $39.99.